Round 5: Jake Hart vs. Adrian Rimmer 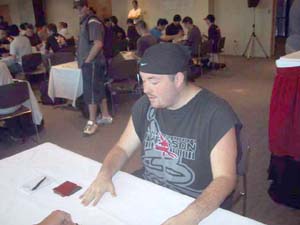 Jake (SA) and Adrian (Vic) had drafted their way to a 3-1 record at this point, and both players knew whoever won this match would be in a great position going in to the final round of day #1. Jake had amazingly drafted a mono-red deck with no less than 3 Chainflingers, 2 Barbarian Lunatics, 2 longhorn Firebeasts and 11 burn spells, while Adrian had done well drafting blue fliers with black backup.

Jake chose to play, as is your want play what effectively was a sligh deck, however it was Adrian with the first play- a second turn Crypt Keeper. Jake had stalled at 2 land and had drawn into a Mad Dog, which he dropped after the keeper. The keeper was meant to be the rear-guard until enough land had been dropped for the fliers but Jake caught Adrian by placing a Crackling Club on the keeper. With nothing in the graveyard it resolved successfully and killed the keeper to open the door for the dog to beat.

Adrian followed immediately with an Aven Fisher and a think tank while Jake had managed to eke out a 3rd land for a Barbarian Lunatic. Although being attacked by the Mad Dog, Adrian seemed unwilling to trade with his flier wanting to block with something more substantial. The substantial Dreamwinder however was removed with a Sonic Seizure allowing the dog to go in for a third unblocked attack. It was 6th turn before Jake found his 4th land and was able to get his Chainflinger out – easily enough time to be Morbid Hungered. Adrian's creatures were coming out ion force as an Aquamoeba and a Skywing Aven were followed with a Rotting Giant, and his hand didn't seem to diminish with a deep analysis.

Jake knew the long game didn't suit him and continued to push with the attack but Adrian was now more than happy to trade, especially with the Skywing evasion ability. The Chainflinger went to Patriarch's Desire and a finally chump (Balthor the Stout) was removed with a flashed Morbid Hunger. A Zombified Dreamwinder and a second Aven Fisher, combined with the invaluable Skywing made Jake scoop as his last chump, a second Chainflinger, was met with a Ghastly Demise. 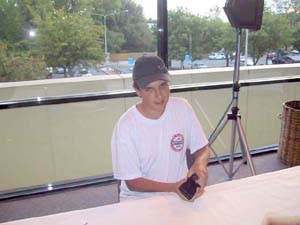 Again Jake would fail to find the quick start he was after, this time drawing too much land as Adrian opened with an Aquamoeba. The Barbarian Lunatic that followed was unwilling to trade his blue counter part. A Longhorn Firebeast was met with much thought from Adrian and a response that indicated he was willing to pay 5 life to put it in the graveyard was colourful enough to earn him a warning from the table judge. From Jake - a Firebolt that removed hie Aven Fisher. While tapped out, the lunatic was picked off with a Patriarch's Desire – but Jake was able to reply with a Dwarven Strike Force that plucked (you guessed it) a mountain and swung for 4 damage as the long horn traded with a Dirty Wererat. Down to 9 life, Adrian mised the land he needed for the Morbid Hunger.

Jake now sat back in control mode as a Chainflinger was dropped putting Adrian on a clock. How short a clock was surprising as when Adrian was on 9, in just 1 turn Jake was able to flash a Firebolt, Sonic Seizure pitching a mountain and Barbarian Ring for the final 2 damage.

Here Jake again drew copious amount of land, going with a 5 land start (with Balthor the Stout & a Chainflinger). Adrian chose to play and Aether Busrted Jake 3rd turn Balthor, then dropped a Dreamwinder. Jake followed with the Chainflinger but didn't block with it is Adrian sacrificed an island to enable the Dreamwinder to attack, unfortunately this gave Adrian a second card in the graveyard – enough for him to cast Ghastly Demise on the 'flinger. Land was also in great supply on Adrian's side of the table, he would drop 7 islands and 2 swamps in as many turns. Again he paid 5 for the Longhorn Firebeast (It's almost a ball Lightning).

He started his flying arsenal with one of his Aven Fishers as twice the same Firebolt hit the Dreamwinder. Taking 1 point of pan from the Barbarian Ring, Jake's Balthor traded hits with the fisher bringing both players life totals down to 11. The land, it seemed, was unending. 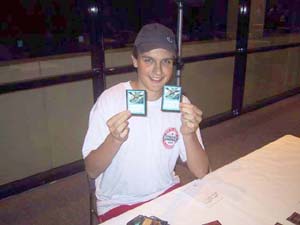 Eventually Adrian dropped a Think Tank which wasn't that effective as he would end up always taking the first card he drew as most of his land was now in play. Jake responded with a Mad Dog but the dog & Balthor were Aether busted back to his hand as the Aven went in for another attack (9). The Mad Dog & Balthor were recast but the Pardic Lancer (using the Barbarian ring - 8) that followed was Syncopated out of the game. Adrian attacked again (6) and Played a Zombie Assassin which he hoped would go 2 for 1 next turn. Jake pushed the race with a Demoralize (from the sideboard) bringing him opponent to 7, with a Volley of Boulders in his deck and an almost active Barbarian Ring, he was not out of the match yet.

An Acceptable Losses picked off the Assassin but it still was able to take down Balthor. Knowing he would lose the Mad Dog/Aven Fisher race he pushed with a Barbarian Lunatic but a Fervent Denial not only foiled the lunatic but the hope of a Volley of Boulders top deck next turn win. Adrian sealed the match by Zombifying the Dreamwinder and attacking for another 2 (Jake - 4). With just enough mana to protect himself with the denial and the Mad Dog not being able to block the match was his. Jake's next card was a mountain, his 14th land out of 22 cards drawn in this game. There were only 2 other land left in his deck.