Round 5: Jeff Cunningham vs. Ed Fear 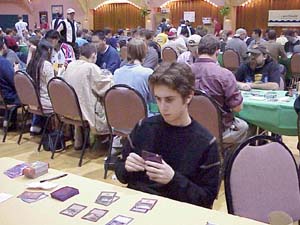 Jeff Cunningham Jeff Cunningham is fresh off his Top 8 at Pro Tour-San Diego, but perhaps is more known for his current participation is "Magic Colony." Ed Fear is recently off of a one-year suspension from the DCI but has already qualified for PT-Nice with a PTQ win just a couple of weeks ago.

Fear doesn't like his deck. "With Llawan [Cephalid Empress] I have to play against all the blue mages I can." Cunningham said...well, Jeff is pretty quiet.

Fear chose to play first and got stuck on two lands and did not make his third land drop until turn 5. In the meantime Cunningham took advantage by slamming Fear with a Basking Rootwalla for a couple of turns, until he added a Springing Tiger to Fear's woes on turn 5.

Finally Fear had things on track with a Psychatog and an Organ Grinder, but unfortunately for him, Cunningham also had Llawan, and bounced Fear's creatures to his hand and swung to win.

Fear once again chose to play first, and was under early pressure from an Escape Artist. On Fear's third turn, he Unhinged his young opponent and lo and behold, Basking Rootwalla made its way on to the table.
The following turn Cunningham drew a forest, cast Twigwalker, and Fear was behind again.
While Cunningham missed his 4th turn land drop, he continued to swing away with Escape Artist as his Rootwalla and Twigwalker were held back with a Treetop Sentinel.

On Fear's 5th turn he went for an Aven Windreader, looking to fly over Cunningham's team, but the Canadian had Syncopate. Cunningham was forced to discard a Springing Tiger and a Seton's Desire the following turn when Fear cast Last Rites, slyly discarding an Obsessive Search, negating the card loss. 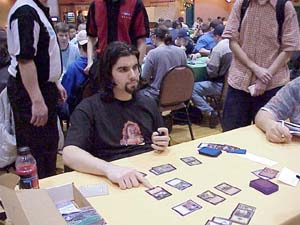 Ed FearFear tapped out to cast Organ Grinder and Escape Artist on his next turn, however Cunningham had the answer with Engulfing Flames; first on the OG at the EOT (remind you of the PTR-EDT match?) and then, on his turn for the Escape Artist.

The game was at a near standstill, save for Cunningham's Escape Artist until Cunningham drew Llawan again, and bounced Fear's Sentinel and the green creatures could attack again.
Fear had no answer for the Empress and packed up his cards.