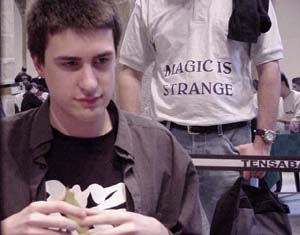 It's what the Dutch seem to do for a living these days: making a killing at tournaments. Jelger is no exception, and he's hoping to add another Grand Prix Top 8, at least, to his already bulged curriculum. Juan is another example of people who go to Grand Prix and have to work their way through with little, or none at all, byes.

A fight between proven experience and rookie hard work.

Juan came out smoking, so to speak, with a Diligent Farmhand. He sacrificed it to get his third hand and decided Draino was the way to go: Nimble Moongoose followed by Standstill.

While the Spanish player nimbled away with his Mongoose, Wiegersma seemed in the midst of a biblical flood, mana flood that is. Playing land after land he reached nine before reacting, while in the mean time Vidal was discarding cards to avoid breaking his own enchantment.

The Dutch finally reacted with a Chainer's Edict and Vidal replaced the departed Mongoose (who dealt an impressive nine damage) with an Elephant Ambush token. When the token stepped into the Red Zone Jelger Wasted it Away. The next creatures up were Wild Mongrel, which - with Vidal's hand full it - promised a world of pain, and Basking Rootwalla.

The Dutch decided to get into the creature action as well: Rabid Elephant and Cartographer. This gave Juan a chance to exert some revenge with a Waste Away of his own sending the Elephant to the graveyard.

A Snake-Tongue Basilisk and a Basking Rootwalla showed up to replace the casualties in Jelger's army and once again Juan Vidal had to come up with an answer. A Crippling Fatigue took out the Rootwalla while Wiegersma was tapped out and a Roar of the Wurm token showed up.

Sadly for Vidal it was too late: the Basilisk's threshold ability meant they were all going out on the next swing. Sure enough the Basilisk traded for the three creatures and again they both replenished their sides of the table. Vidal got Aven Windreader, Springing Tiger and Werebear while Jelger got Nantuko Calmer and Krosan Constrictor.

Things looked pretty balanced until Wiegerma dropped the elbow: Gravedigger fetching back the Snake-Tongue Basilisk. Vidal now needed to keep swinging before the beast got back online.

His Windreader was a big problem for the Dutch (since it could put him away in four swings and he had no immediate answer for it on the table). The Basilisk got Repelled and Vidal attacked with everything before using the Fatigue's flashback to take out the Constrictor.

But the Dutch wasn't out of elbows to drop. A threshold-powered Shower of Coals took out the Werebear and Windreader and when the Tiger came running in again a Muscle Burst gave the Gravedigger enough fuel to survive (with a little help from Vidal's own Diligent Farmhand).

With the table now almost under control Jelger replayed his Basilisk. From this point on Vidal's resistance was broken. He tried desperately to cling on by chump blocking but it soon became obvious the game was lost. His last gasp attempt to chump with Elephant Ambush's token was thwarted by a Temporal Insanity. 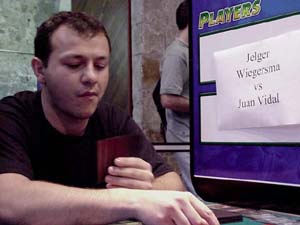 Again the Farmhand showed up on the first turn but Jelger has a first turn play of his won as well: Basking Rootwalla. He even followed that with Chatter of Squirrels to show everyone he could play a fast game as well.

The Farmhand departed to help balance Vidal's mana and a Crippiling Fatigue took out the Rootwalla. A Wild Mongrel tried to stop the squirrel's attacks but a Chainer's Edict sent it away. Vidal used the Mongrel, before its demise, to discard a Roar of the Wurm.

As you can imagine the flashbacked Roar meant the tables had turned. The impunity of the Squirrel attacks was over, the Wurm was the king of the Red Zone. Or at least that was what we thought. The two squirrels teamed up with a Muscle Burst to take out the huge Roar tokens.

Visibly shaken Vidal shook his head but fought back with a Coffing Purge to nullify Jelger's Gravedigger on the next turn. He even found a Windreader to rule the skies before crushing Wiegersma dreams of attacking with a Rabid Elephant with a Waste Away.

Things were looking good for Juan Vidal. That is until Jelger used a Morbid Hunger to take out his flyer. An Elephant Ambush gave Vidal another big creature and a Leaf Dancer a way to sneak past any blockers. Again he seemed in control of the match.

The Gravedigger and Afflict took out the Ambush token and Jelger got into the landwalking business as well with a Krosan Constrictor. For a little while at least, because Vidal flashbacked the Fatigue to take it out.

This game had more plot twists than a bad soap opera and Jelger Wiegersma was about to pull another one. He used a Temporal Insanity to steal a Basking Rootwalla and attacked with it, pumping, along with a Dirty Wererat for exactly the seven points of damage he needed to deal.