Round 5: Jens Thoren vs. Carlos Romao 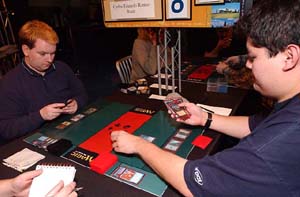 Jens Thoren and Carlos Romao have only faced each other twice before in tournament Magic. Each time the winner of the match went on to win the tournament. For Jens it was the Invitational and for Carlos the World Championship.

Jens is running an Aluren deck with plentiful search and hand disruption in the form of Cabal Therapy—a surprise standout thus far in the tournament. Another surprise is the Atog Dance deck that Carlos is piloting, so named for the Psychatog and the Corpse Dance that is accessible from the sideboard thanks to Cunning Wish. Both players are 2-2-0 and the loser of this match will not advance to day 2.

Carlos won the roll and elected to play first. he led off with and Island and passed the turn. Jens dropped a Swamp and cast Cabal Therapy. After a few moments of trying to read Carlos' eyes he decided to name Counterspell.

Carlos played his second Island and passed the turn. Jens played a Polluted Delta, which he broke for an Island to cast Brainstorm, which yielded him a Wirewood Savage and a Cavern Harpy. He also cast another Therapy from his hand naming Intuition. He saw that Carlos had drawn a Mana Leak.

Carlos just kept playing Islands and saying, "Go." Jens dug one card deeper with another Brainstorm and put two lands on top of his deck. Forest powered up a Living Wish, which fetched him a Raven Familiar. During the end of Jens turn Carlos cast Cunning Wish to find a Gush.

Carlos put two blue into his pool and payed Gush's alternative casting cost and found nothing to play and mana burned for two. He did find another Mana Leak though and passed the turn back with some confidence. Jens attempted another Familiar and Carlos took a Leak on it and Jens played a Hickory Woodlot.

Carlos continued to play Draw-go and when Jens attempted an Aluren it drew another Leak from the World Champ. Jens peeled an Aluren on the next turn but it was met with Counterspell. Finally, Jens got a spell to resolve and he played a Wirewood Savage sac'ing his Woodlot along the way. Carlos began the process of rebuilding his resources when he cast AK at the end of the turn. 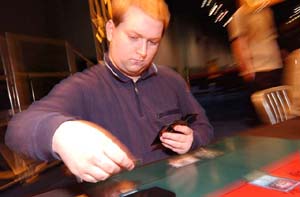 Carlos cast his second main phase spell of the game in Sapphire Medallion. Jens attacked for 2 with the Savage and then attempted the card he had just drawn...

...his third Aluren in a row! Carlos allowed it to resolve despite being able to Cunning Wish for Annul. Instead he used the Wish to get Gainsay when the Invitational winner attempted to cast Cavern Harpy.

Fact or Fiction offered Carlos the choice between Swamp, Wonder, and Diabolic Edict or Medallion and AK. The Brazilian took the former pile and promptly played his first black source and Edicted away another third of Jens' combo. Jens had nothing on his next turn and glumly passed the turn.

Carlos could have played the Psychatog as an instant at any time thanks to the Aluren but chose to hard cast it during his main phase. It didn't seem to matter as Jens sent the turn back with no play.

The math was close with 17 cards in his graveyard but the Champ had to content himself with a peck this turn. Jens knew his time was running out and he drew and cycled Cloud of Fairies on his next turn, which found him Intuition. Carlos attacked and Jens considered the situation and announced, "No blocks." That was all Carlos had to hear and he cast AK for four cards. Jens knew the jig was up and Intuitioned for three Raven Familiars. He cast the one he kept thanks to Aluren but the window for blockers had closed. He didn't see anything that would have helped anyway and he fell victim to the Psychatog math.

Both players deliberated their sideboard choices carefully. Jens brought in three Orim's Chant and took out two Wirewood Savages and his lone Stroke of Genius. Carlos took nearly the maximum amount of time allowed to make his choices and finally settled on two Annuls and a Gainsay for Wonder and two medallions.

...which was Force Spiked!

Carlos went back to his Draw-go ways and played an Underground River and passed the turn. Raven Familiar finished off the Woodlot and Jens took a Brainstorm with it. He then found another Woodlot and played it. Carlos just stayed his course. 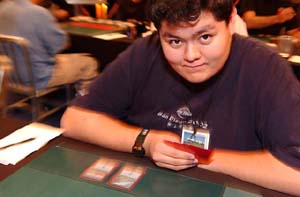 Jens payed for the echo on the Raven Familiar at the cost of a counter on his second Woodlot and swung in for a point of damage. Carlos took another point when he tapped his painland to Edict the Familiar. Carlos seemed happy with the pace of the game and started saying "Go" again. Brainstorm put the whole combo in Jens's hands but he could not comfortably just go for it. He sac'd a Delta to find a Swamp—shuffling his unwanted Brainstorm cards in the process—and cast Cabal Therapy naming Counterspell. He found instead: Annul, Mana Leak, Intuition, Fact or Fiction, Tog, and a fist pumping World Champion. When Jens reluctantly passed the turn Carlos cast FoF and yielded a Medlalion and AK. The Medallion hit the table and the turn went back to Jens.

Jens cast Cabal Therapy and it was countered with Mana Leak. Jens gave up his Woodlot to play a Familiar and found a Brainstorm. He flashed the Therapy back and named Intuition and left his opponent with Annul and AK the latter of which Carlos used to draw a card at the end of the turn. Two just-drawn Togs hit the table and Carlos was looking good. Jens was playing the wrong kind of Draw-go and could only take 2 a turn from the grinning Atogs until the World Champ was able to finish him off with the big turn.

"This is good news for me," said the champ. "This means I will win the whole thing!"