Round 5: Jeroen Remie vs. Dirk Baberowski 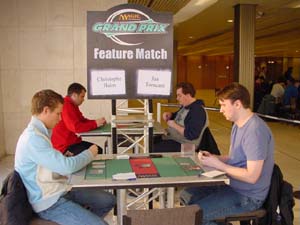 Dirk Baberowski is one of the top German players. He took a brief pause from the game then returned with a bang as part of Phoenix Foundation and has been a regular competitor at the major events since. Jeroen Remie is one of many Dutch players that perform consistently well on the Pro Tour. His breakout performance came out at Pro Tour Houston.

Remie has a solid black-red deck. Baberowski has a white-red deck with a couple of rare bombs in Akroma and Riptide Replicator.

Remie won the die roll and chose to draw, figuring his deck needed the extra card.

Baberowski had a less than impressive start. His Glory Seeker was shocked and he failed to make a creature on the important turn three. He got rid of Remie's first morph with an Erratic Explosion and Remie returned the favor, clearing the way to beat down with his Doomed Necromancer

On turn six Baberowski, with only four land in play could only pass the turn with a sigh.

Remie smashed face with a hasty Crested Craghorn. Baberowski got rid of that with a cycled Solar Blast to find a fifth land. Unfortunately he couldn't dig a second plains out of his deck and Remie beat him down with his 2/2's

"Right, I'll draw. If you think it's correct. That and the contributing factor I'll draw more mana." – Baberowski

This time the German player found two plains, only for his White Knight to be shocked into the graveyard. A surprise Battering Craghorn took down Baberowski's next creature – a Starlight Invoker. Erratic Explosion took care of a Dive Bomber.

The German player had a very big turn when Remie attempted to provoke an Akroma's Devoted with a hasty Craghorn. Baberowski flipped over a Marauder to intercept the Craghorn and its smaller relative ran helplessly into the Devoted to give the German 2 for nothing.

A Machinist on Remie's side clogged the board up a little, but a Riptide Replicator (black clerics) threatened to ensure that was temporary.

The Machinist ran in and traded for a Marauder and token. Remie wasn't out of it. He had an unblockable Fallen Cleric to strike back with. Pinpoint Avalanche ended that plan and Remie scooped to the infinite cleric potential of the Replicator.

Remie chose to draw again and this time Baberowski's bear didn't get shocked. A Flamewave Invoker appeared but Remie was able to amplify a Brawler to 3/3 to hold up the offence.

A Ridgetop Raptor kept the pressure up although Remie was able to shock a Redeemer off the board with a Marauder.

Remie attempted to trade the Raptor for his Marauder only for Baberowski to put first strike damage on and cycle Solar Blast. A Cruel Revival clawed some advantage back for Remie.

Baberowski had a second Raptor. Time for Remie to clear the board with Infest and follow with a 3/3 Brawler.

Baberowski dropped Crowd Favorites then a Daunting Defender. A Misery Charm dropped the Defender but an attack from the Favorites put Remie at 4. When Baberowski dropped a Flamewave Invoker with a seven land on the table the gun was at Remie's head.

Baberowski pulled the trigger a few turns later on finding his eighth land.