Round 5: Jin Okamoto vs. Kenji Sato 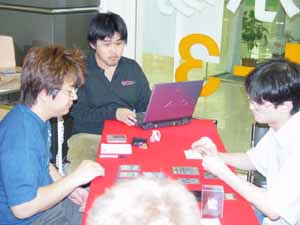 Jin Okamoto is one of Japan’s most popular and successful players. He has been nicknamed “The Last Emperor” due to the fact that he won the last APAC Championship, but unfortunately didn’t have a great start today, and is only 2-2 so far. Kenji Sato is relatively unknown, but did make Top 20 of Kantou Regionals in order to get here, which was a tournament that had 700 players.

Okamoto’s morph was matched by Sato’s Cabal Archon. The morph attacked and Sato attempted a trade, but after damage went on the stack, Okamoto’s morph revealed Wall of Deceit. Unfortunately, Okamoto missed his fourth land drop, played a morph, and ended his turn. Guilty Conscience went on the morph, and Sato played a 2/2 Embalmed Brawler. Okamoto was still lacking a fourth land, while Sato had five. The morph with a Conscience attacked and was not blocked, and unmorphed to reveal Haunted Cadaver. This forced a 4-for-1 exchange, as Guilty Conscience headed to the graveyard along with two lands and Clutch of Undeath. Okamoto played another morph, and Sato summoned Whipgrass Entangler. Okamoto was still digging for land and hoped Riptide Survivor would get the job done, as he discarded Mistform Wall and Wretched Anurid, and then finally played another land. Sato tapped out to activate his Entangler three times, which let it get through for one damage while the Brawler was blocked. Mercurial Kite gave Okamoto some pressure in the air, and Sato summoned Zealous Inquisitor.

Things seemed a bit even as Sato’s Entangler was keeping Okamoto’s creatures from being too involved in combat, but then Okamoto played Future Sight to break the game wide open. He played a land off the top followed by Mistform Seaswift, and the card advantage kept piling up. Clutch of Undeath dealt with the Entangler, and the rest was academic, as Future Sight gave Okamoto everything he needed and more.

Sato played a morph, and Okamoto cycled Shoreline Ranger. This was followed by Mistform Wall to hold down the ground, and Sato summoned Dive Bomber. Okamoto matched that with Mistform Seaswift, and Sato attacked with both his creatures. The Seaswift blocked Dive Bomber and the Wall blocked the morph, which flipped over to reveal Fallen Cleric. Okamoto started rebuilding with Shifting Sliver, and Sato dropped his deck’s bomb- Visara the Dreadful. Lingering Death took care of it, but not before it killed the Sliver. Sato kept the pressure on, playing a morph and an Embalmed Brawler. Okamoto summoned Twisted Abomination, and had one mana free to regenerate it. Sato attacked straight ahead with all his creatures, and the Abomination blocked Sato’s morph, which flipped over to reveal Grinning Demon. Okamoto untapped, and played two morphs. At this point, the board was even, except for Sato’s Grinning Demon hitting its owner for two damage a turn while the Abomination kept it from hitting Okamoto at all.

Okamoto’s morph attacked and got through for damage, then flipped over to reveal Haunted Cadaver. Sato discarded his hand, which was made up of two lands. Okamoto soon got eight lands in play, which was followed by Smokespew Invoker. The ninth land allowed him to activate it and still have one mana left to regenerate the Abomination. This was enough to give Okamoto the game and the match.