Round 5: Jon Finkel vs. Michael Pustilnik 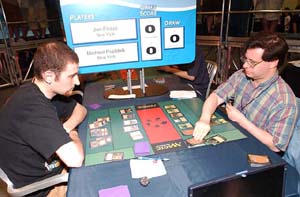 If you've been reading Sideboard coverage of Pro Tours lately, you know the story with Jon Finkel. Posterboy is overshadowed by German Juggernaut, and almost fades into obscurity before finding redemption and returning to top form. Can Jon Finkel continue his winning ways? Can the intro to a Jon Finkel Feature Match actually not include the words "motivation", "potential", or the phrases "second best" and "it seems he wins when he cares enough"? Who knows, it's certainly something to strive for.

Pustilnik had a turn three Timberwatch Elf, which was taken care of thanks to Lingering Death. Pustilnik added to his side with a morph creature, and Finkel played Aven Redeemer. Pustilnik's morph attacked and was not blocked, then flipped over to reveal Hystrodon. Pustilnik then summoned Elvish Warrior, and ended his turn. Finkel played a morph and kept the Redeemer back on defense, and Pustilnik played Berserk Murlodont before attacking with his Hystrodon. Finkel blocked with his morph and flipped it over to reveal Daru Sanctifier, which survived thanks to the Redeemer.

Finkel continued to stabilize the board with a morph and Zealous Inquisitor, and Pustilnik had Treetop Scout and Wirewood Channeler. Wirewood Herald and a morph creature followed for Pustilnik, and Finkel unmorphed Skinthinner on end step to kill the Murlodont. He then untapped, and attacked for two with the Redeemer. Cabal Archon provided another threat, and Pustilnik seemed to be in trouble. He untapped, and played Elvish Guidance, getting a "Fireball?" out of Finkel. The Scout and Hystrodon attacked, and the Skinthinner, Sanctifier and Inquisitor all blocked the Hystrodon. Patron of the Wild flipped over to make the Hystrodon bigger, and the end result was two activations from the Inquisitor, and it headed to the graveyard along with the Skinthinner and the Hystrodon.

Kurgadon gave Pustilnik another significant green creature on the table. The Redeemer attacked for two once again, and Finkel played Gempalm Polluter, then cast Lingering Death on the Kurgadon. It attacked along with the Scout, and was blocked by the Sanctifier, dealing one damage total to Finkel on the attack. The Polluter attacked and was chump blocked by Wirewood Herald, which fetched Wirewood Guardian.

Finkel- "I forgot about that guy. He's pretty big." 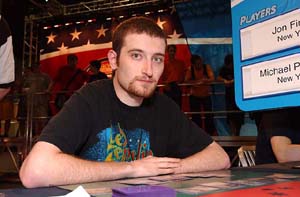 Whipgrass Entangler wasn't much of an answer either, since Pustilnik had access to plenty of mana thanks to Elvish Guidance and the Channeler. It became apparent that Finkel would need to outrace in the air and finish it with Cabal Archon, so he attacked with the Redeemer and played Dragon Stalker. The Guardian attacked, and was chump blocked by Clerics that were sacrificed before heading to the graveyard. Pustilnik added Titanic Bulvox to the board, but Finkel was able to squeeze through enough damage to take the game.

During sideboarding, Pustilnik made sure to point out to me the two Nantuko Vigilantes coming in, which would obviously be good against Finkel's Lingering Deaths.

Pustilnik had a morph creature, and Finkel played Crypt Sliver. Snarling Undorak came out soon after, and Finkel summoned Zealous Inquisitor, missing his fourth land drop. Crypt Sliver blocked the Undorak and regenerated, while the morph got through for damage. Timberwatch Elf and Wirewood Herald put Pustilnik further ahead, and Finkel found his fourth land. His Inquisitor got through for two damage, and was joined by Aven Redeemer. Pustilnik's attack brought Finkel down to eleven, and Kurgadon added to Pustilnik's side. Finkel cast Festering Goblin and ended his turn, keeping all his creatures back and ready to block. Symbiotic Beast made Kurgadon bigger, and on the following turn, the Beast, Kurgadon and Undorak all attacked. The Inquisitor blocked the Undorak, and the Sliver blocked Kurgadon. The end result was every creature living, and Finkel taking two damage from the unblocked Beast thanks to his Redeemer.

Finkel untapped, and summoned Whipgrass Entangler. Pustilnik took his turn and attacked with two morphs, the Undorak, Beast and Kurgadon. The Inquisitor and Entangler each blocked a morph, Festering Goblin blocked Symbiotic Beast, and Crypt Sliver blocked Kurgadon. One morph flipped over to reveal Patron of the Wild, pumping itself. Timberwatch Elf made the other morph bigger, putting five damage on the Inquisitor when Finkel had only three mana untapped. It shot Timberwatch Elf for one before dying, and Festering Goblin took down the powerful combat modifier. Finkel simply played Bladewing's Thrall, and ended his turn. This kept Pustilnik from attacking, and Finkel started to stabilize more with Trap Digger.

Wirewood Guardian made Kurgadon a 9/9 creature, and it attacked with the Symbiotic Beast. Thanks to Crypt Sliver and a high toughness blocker along with the Redeemer, the attack was nullified. Pustilnik tried it again on his next turn, this time sending the Guardian too. The end result was not entirely favorable, as the Thrall simply traded with the Guardian. Vile Deacon and Gustcloak Harrier added to Finkel's side, and Pustilnik once again sent the Beasts, this time forcing some chump blocking from Finkel, who was at six life points. Silvos made a bad situation even worse, and Finkel conceded. 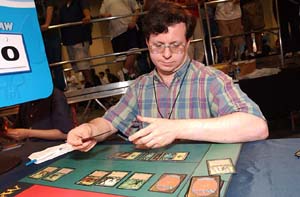 Finkel had a first turn Festering Goblin and a second turn Crypt Sliver, followed by a third turn Nantuko Husk. Pustilnik played a morph and the Husk attacked, running over the Herald and giving Pustilnik Timberwatch Elf. Finkel kept his curve going with Bladewing's Thrall, and Pustilnik summoned Timberwatch Elf. Festering Goblin was blocked and traded with a morph (Patron of the Wild) and Finkel played a morph, while Pustilnik made his Timberwatch better with Herald and Elvish Warrior. Finkel cast Cabal Archon, and Pustilnik played a morph. Finkel played a second morph, and Pustilnik flipped over Snarling Undorak on end step. At this point, both players kept putting creatures on the ground, and for the game to end, Pustilnik would need enough fat on the ground to break through, and Finkel would need evasion and/or a breakthrough card. Cabal Archon could potentially provide that, but Finkel needed to deal damage and/or draw a few more Clerics first.

Thanks to Snarling Undorak, the first scenario was happening, with a little help from Symbiotic Beast and Kurgadon. Whipgrass Entangler stopped that plan, and Ward Sliver on green slowed things down even more. Finkel now had ten points of Archon damage on the table, and Pustilnik was at 12- one more Cleric, and the game would be over. Dragon Stalker came out instead, which was just as good. Pustilnik searched out Silvos with Fierce Empath, getting a sincere "Sure!" out of Finkel, which got a laugh out of the spectators. With no other options, Pustilnik went for an all out attack, which Finkel easily survived. Despite the Cleric kill on the table, Finkel revealed the Akroma waiting in his hand as well.