Round 5: Jon Finkel vs. Steve O'Mahoney-Schwartz 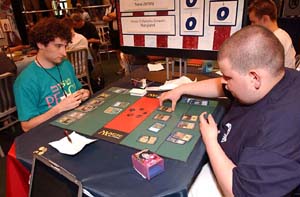 Logan's Run aficionados will recognize this as Last Day for Jon Finkel and Steve O'Mahoney-Schwartz. Veterans of the tour from way back, it just made sense that they would always be there. Well, neither one of the Antarctica teammates have an invitation to this year's World Championships in Australia, and earning a spot on the National Team is their one remaining out. Both are running blue-green Opposition decks that splash red for Fire/Ice and Flametongue Kavu. They certainly didn't want to run into each other.

Both were all business as they shuffled up. Their 2-1-1 records meant that a draw was unacceptable. There was no chitchat, just the riffling of cards together. They matched turn-two Looters. OMS followed with Wild Mongrel, and Finkel had no answer. Another Mongrel hit the board. Finkel answered with Squirrel Nest, but had to tap the enchanted land to blow off OMS's Circular Logic with one of his own. That let OMS come through for more damage. Finkel was already at eleven, and OMS was Looting into Deep Analysis.

Finkel's play of "Bird, go." was uninspiring. OMS dropped him to seven. Squirrel Nest would be the nail in the coffin for Jonny Magic. He Iced OMS's lone blue mana, then Looted up Circular Logic. He kept OMS off red mana with Fire on his Looter and Bird. OMS tried to flash back his Analysis, but met Circular Logic. Only his Squirrel Nest made it through. 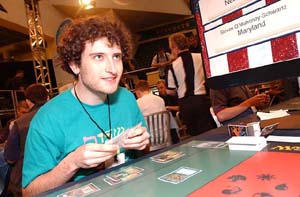 Finkel was firing on all cylinders. Flametongue Kavu took out a Mongrel, and he made one of his own. OMS would be hard-pressed to push damage through. He made a strong move with Opposition. Finkel calmly untapped and played one of his own. With more and better creatures, his position looked solid. OMS finally hit his trump: red mana.

Fire took care of Finkel's Bird and Looter, and more importantly, put him on the back foot creature-wise. Finkel needed to overwhelm OMS's tapping ability. To that end, he spent half his life on re-using Deep Analysis. He added a couple of Birds to the mix. But after all the tapping was done, OMS was able to sneak through with one squirrel token. A second Fire finished the job. 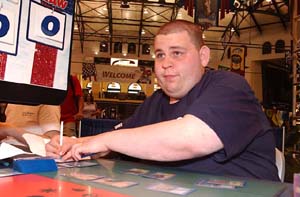 Finkel's all-painland draw in Game 2 was helped out by Birds of Paradise. He got his Looter, but OMS had already sped into a Squirrel Nest. He tried to get aggressive with Wild Mongrel. OMS made him pay with Fire, taking out Bird and Looter. Finkel's empty graveyard meant he couldn't Circular Logic. OMS was in the driver's seat.

He tried Deep Analysis, drawing Gainsay from Finkel. Finkel had nothing to add of his own. OMS brought the Analysis back for more. Finkel pushed Looter past Gainsay with Gainsay, but had nothing more in hand. OMS made Unnatural Selection, stopped a last-gasp Opposition with Circular Logic, and made a Looter of his own, killing Finkel's with the Selection. All the while Squirrels were building up, just waiting to get past the Mongrel. Finally, OMS drew Flametongue Kavu and smashed through. Finkel extended the hand.