Round 5: Joseph Crosby vs. Patrick Sullivan

"I've had two GP Feature Matches before this," Patrick mentioned. "They were both excellent matches and both were limited events."

Patrick Sullivan is a member of the CMU-TOGIT conglomerate, and has been plagued by a string of close calls in recent events. He's looking for a win to put him over the top. His opponent is Sideboard Online's own Joe Crosby, famed for his tight limited game and insight into complicated plays. Patrick immediately declared this Feature Match "a fix" on Sideboard Online's part. 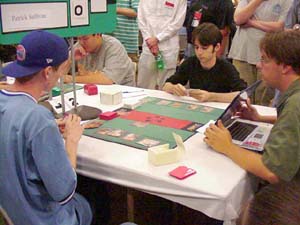 Joseph won the die roll and elected to start the game. With one glance he decided to keep a strong opening Goblin hand. Three Goblins, some burn and the land to make it work. Patrick mulliganed his hand, then led with a Bloodstained Mire out of his six card hand. The Goblin Sledder that Joe played was matched with a Raging Goblin from Patrick.

A second mountain led to a Goblin Piledriver, coming out to play for Joseph, but Patrick swiftly burned it off the table, using Firebolt to destroy it before it ever got to attack. Two Firebolts had been used by Patrick at this point, but he had yet to show a second creature to go with his Raging Goblin. Finally a Goblin Warchief joined the table.

The Goblin mirror is all about who gets the better start, but neither player had been able to sustain momentum up to this point. Each creature that would be played on the table would be burned right off of it. Joe used a Firebolt and Volcanic Hammer to remove two of Patrick's creatures while Patrick used two Firebolts to remove Joe's creatures. Joe finally did place a Goblin Goon on the table, and the party seemed turn around for him at that point. His Goon and Warchief attack, forcing Patrick to block with his only creature, a Piledriver, to avoid losing the game. 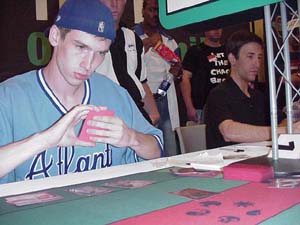 "You done boarding," Patrick asked Joe as they shuffled up for Game 2.

"Yup," came the response from the other side of the table.

"I'm going to draw," Patrick says. The two players talked a little bit about the hand that Patrick put back in Game 1. Five lands and double Blistering Firecat is what he put back.

Both players opened with Raging Goblin, underscoring the need for speed that makes a Goblin deck so lethal. The problem was that neither player could seem to find the creatures that would put them over the top. Patrick finally found a Piledriver that could have gotten things swung in his direction, but his next Piledriver was met with a Firebolt.

Joe followed the Firebolt with a Fledgling Dragon, and he even had threshold for it. It didn't matter though, as Patrick killed it. The two players spent some time just looking across the table at one another, drawing and playing a land then passing the turn back rapidly. 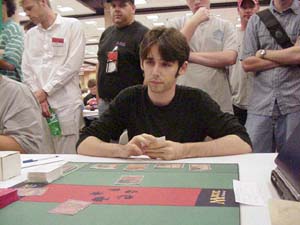 Finally, some action occurred. Patrick killed the Sparksmith and played a Sledder. Joe killed the Sledder and started his army of goblins going. A few turns later it was all over. Patrick extended his hand as he conceded.

"I didn't know if I should play or draw," Patrick mused following the match. "What's the right choice in the mirror?"

No one could provide an answer at the time, but Patrick drew in this match, and lost, so maybe that provided a little statistical information for others to begin their study with.