Round 5: Kai Budde vs. Don Gallitz 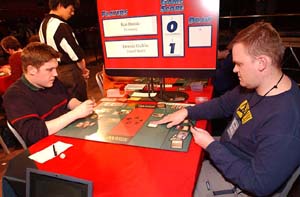 Donnie Gallitz, has been a regular on the Pro Tour since its very beginning. The former Tongo nation player was at one time considered the best player never to make a Top 8. He still holds the somewhat dubious record for most PT appearances without a Top 8. Before this Pro Tour, Gallitz announced that it would be his last. No matter where he finishes, Donnie is calling it a career. With a full-time job, a wife, and only 10 vacation days per year, Gallitz is done. With 2-1-1 record at his first draft table, Gallitz needed to win two of the last three rounds to extend his career by one more day. his opponent (also 2-1-1, also needed to win 2 of 3 to keep playing) was some stick named Kai Budde.

Before Kai even sat down at the feature match table he was telling Gallitz how badly Gallitz had drafted. "You drafted horrible," he said to Gallitz before turning to me to elaborate. "He took a blue card right behind a blue player and then when he realized he had to get out he took a second pick Bloodcurdler!" Turning back to Donnie, Kai lectured "You know that card is unplayable, right?"

Donnie just sat there and took it quietly at first, then busted out with "but I never lose to you!" Kai shook his head "we've played what? once?" Kai turned to me and continued to attack Gallitz "It was Pebbles versus Stompy and he kept Lumbering Satyr in his main deck with Wumpus in the board. What am I gonna do versus Wumpus? Drop a zero casting cost wall?!" Donnie's only response was "How does it feel to be the best player in the history of the game Kai? What's it like when you go home?" The words were pretty vicious, but both players were smiling and laughing so I think it was all just in good fun. 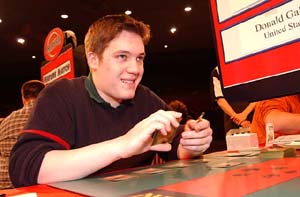 Kai had to mulligan before game 1, and then on Gallitz's second turn that Bloodcurdler came down to Donnie's shouts of "Come on bitch! Bring it! This is the Bloodcurdler of death!" Budde just shook his head and laughed "yeah, sure." "This guy is gonna hurt you," Gallitz promised. Budde didn't have any answers to the Bloodcurdler or the Dusk Imp that Gallitz followed up with. Gallitz actually screwed up the timing on the Bloodcurdler before the game was over when, with six cards in his graveyard, he attacked for 1 and then used Patriarch's Desire to kill a creature. Clearly relishing in what's probably his last feature match, Gallitz yelled about his own mistake, "I can't believe you got that lucky Kai! Who gets that lucky?!" Kai answered "It's not luck ... you're shit." His misplay didn't actually cost him anything as Budde never did draw an answer to either flier or the creature he needed to make the Overrun in his hand do lethal damage. It was at this point that Craig Cudnohufsky walked by and Glitz begged him to "get a picture quick, while I'm still winning!"

Donnie's running commentary didn't take long to start up in game 2. When Kai had looked at 3/7ths of his opening hand and already said "I'll keep," Gallitz starting talking about Wild Mongrel. When the Mongrel hit play Gallitz was delighted to have a Kirtar's Desire to slap onto it. Budde did him one better: Simplify. After much howling, Gallitz reached across the table to shake Budde's hand and congratulate him on his play. Gallitz's next attempt to kill the Mongrel involved Gallantry on his Angelic Wall. Budde discarded four cards and used Sylvan Might to save his Mongrel and kill the Wall. His hand had been really mediocre (3 lands and Firebolt) so his game was that lone Mongrel. 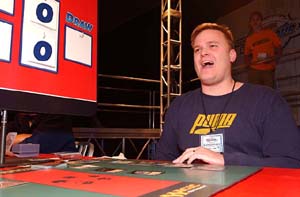 Gallitz's draw was quite good once he finally drew his first swamp, giving him all three colors he needed. Soon he had plenty of monsters and all the removal he needed. When he killed Budde's tapped creature instead of his lone blocker, Kai gently inquired "Why didn't you kill me? Is there any reason not to kill me that turn?" It turns out Gallitz had lost track of Kai's life total. He didn't kill Kai on the next turn either, when he easily could have. This gave Kai time to top-deck a lethal Liquid Fire. However, Budde decided to play around Afflict rather than Ghastly Demise and so he chose Aven Flock (not Dusk Imp) as his target. Gallitz had Demise in hand, fizzled the Liquid Fire, and finally killed Kai on his next turn.