Round 5: Kai Budde vs. Patrick Mello 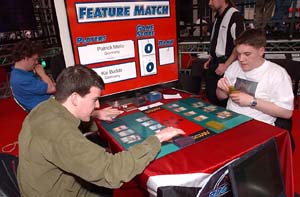 Yet again in this Pro Tour there was another rematch from yesterday, as these two had been paired up in the third round of the masters. (Kai had won). These two Godzilla teammates had also met in the Grand Prix Lisbon final where once again Budde had been victorious.

Kai won the toss and elected to draw first, but the Pro Tour Player of the year had to mulligan down to six (keeping a one land hand).

The first play of the game was Patrick's Angelic Wall, which was matched by a Patrol Hound. Then came Patrick's Skywing Aven, which in turn was met by a Hallowed Healer. On the fourth turn Mello's Teroh's Faithful was paired against a Mystic Zealot and the tone was set for this blue/white mirror match.

With more and more creatures being laid Mello seemed to take the advantage with an Aven Archer that could affect combat quite seriously, but Kai had a great card to play in this match-up also – a Psionic Gift, which he placed on an Aquamoeba. Things then got a little worse for Patrick as Kai managed to resolve an Angel of Retribution (5/5 flying first striker!).

A third colour potential was revealed by Mello at this stage as he laid a Sungrass Egg, but then passed the turn without sacking it.

"Muscle burst?" hypothesized Kai, but attacked his flier into the fray anyways. Patrick did not have the augmentation spell though, and subsequently took the 5 point beating.

Realising that he was running out of time, Mello sacrificed the Egg in hopes of drawing something good, then laid a Seton's Desire on his Aven Archer, knowing that it would not quite be enough to race against the 5/5 and the Hallowed Healer.

It eventuated that Kai too was playing a third colour though, as a Deep Analysis then allowed him to lay a mountain.

Discarding an Arrogant Wurm to his re-laid Skywing Aven was not enough to save Patrick from the 5/5 flying beatstick, which was then accompanied by an Aven Windreader with a Floating Shield on it naming 'white'.

At this stage the board position was:

There was no coming back from this for Mello, so after a long thought out semi-alpha strike Kai just swung back in for the kill.

At this stage Kai revealed to his teammate that he had kept a one land hand.

"What! You beat me with an Angel of Retribution (7 mana) from a one land hand!) 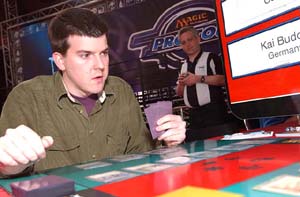 Patrick asked Kai to play first, but then had to mulligan to six himself this time. However, Kai made no plays in his first 5 turns whilst Mello managed to spill out a Cephalid Scout, Skywing Aven and Aven Fisher – playing a Floating Shield naming 'white' on his Aven Fisher suspecting a Second Thoughts. Sure enough, Kai had the card and tried to target the Skywing Aven, but Patrick shifted the Shield and negated the spell to keep up the beats.

A Master Apothecary tried to hold the fort on Budde's side, but a Seton's Desire on the Fisher cranked up the tempo and Kai was in serious trouble – having to Breakthrough for 4 on his next turn to search for some kind of answer, but sweeped on seeing the cards he had drawn. 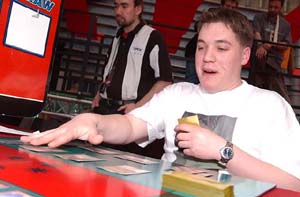 Kai asked Patrick to play first this time, and once again Patrick had to mulligan.
Kai: "Whoever mulliganed has won so far, but that was playing second."

The first creature this game was a second turn Beloved Chaplain from Budde, who was elated to see his opponent miss his third land drop on both turns three and four. With an empty table on his opponent's side Kai then continued to lay creatures – Hallowed Healer then Aven Fisher. Finally Patrick managed a third land and made a Skywing Aven, but Kai's reply was even stronger – an Aven Windreader. The Juggernaut's board position then went from sublime to ridiculous as he cast Deep Analysis, flashed it back, then made an Angel of Retribution. All Patrick could do was make a Teroh's Faithful and a Dreamwinder and try a couple of tricks with discarding Arogant Wurms and Spirit Flares, but the amount of beats on the table was just insane.

At the end of the match Kai pointed out that he had laid a land every turn of the last game and used every mana every turn. (He had cast Obsessive Search on turn 1).