Round 5: Kenichi Fujita vs. Katsuhiro Mori 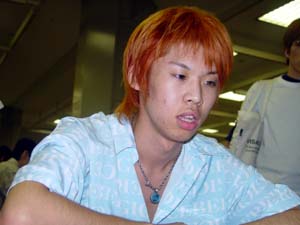 concept of coming full circle may be cliché, but it's fitting for Kenichi Fujita and Katsuhiro Mori this weekend. Last year at this tournament, Mori announced that it would be his last Magic event. Of course, he's now back in the same place, unable to stay away from the game. On the other hand, Fujita came in ninth at this tournament last year, missing Top 8 on tiebreakers. The old school hero "Boss Fujita" has plenty of top finishes to his credit, and it fully capable of some justice and redemption after last year's heartbreaker. Both players came into this round with 4-1 records, and are on a good run to earn the right to play on Sunday.

Mori's Goblin Brawler was countered with Condescend, and Fujita put Slith Firewalker into play to deal a point of damage and grow. Mori summoned Vulshok Berserker and kept it back on defense, so Fujita played a Brawler and ended his turn. Mori played Wayfarer's Bauble, and brought out Blind Creeper. Fujita cast Acquire, and the best he could do was to steal a Clockwork Vorrac. Fujita's Brawler attacked and was double-blocked, so it traded with the Creeper. Mori brought out an Auriok Siege Sled, and when Fujita cast Domineer, Mori immediately started collecting his cards for Game 2. 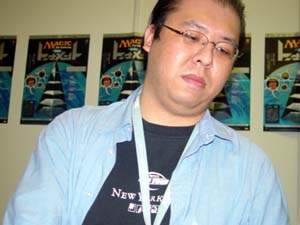 Mori mulliganed his opening hand, and Fujita opened with Serum Visions. Mori had a second turn Vulshok Morningstar, and Fujita played Goblin Brawler. Fill with Fright caused Fujita to discard Thoughtcast and Dismantle. Fujita's Goblin attacked for two, and Mori played his first creature of the game in Krark-Clan Stoker. The Goblin was blocked by it on the following turn, and Lose Hope caused it to die in combat. Fujita brought out a bomb in Arc-Slogger, and Mori gave his Stoker the Morningstar. Fujita's Looming Hoverguard made Mori lean back in his chair and slump his shoulders. After some thought, he decided to sacrifice the Morningstar in response, so that he could have a chance to draw an out instead. He didn't have one, and Fujita's two dominating creatures took care of the rest.