Round 5: Kyle Rose vs. Kamiel Cornelissen 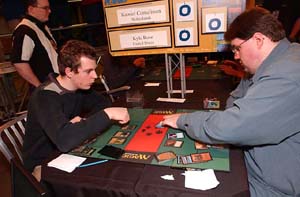 Last time these two teammates from "A little too sick" played each other was round 14 at Pro Tour Houston. Kyle won that time around, so Kamiel is looking for revenge. Both are 2-2 so with their backs against the wall of elimination.

Kamiel won the toss, but it's Kyle with the first play. A turn 2 Lightning Rift

"That card is good, I want that card! What do you think Kamiel?" – Chris Benafel on the neighboring table

Kamiel plays a Wirewood Herald that gets cycled away by Kyle. Next up is a Snarling Undorak, but that too gets Rifted away. The third threat to hit the table is an Elven Riders. Kyle answers that with a Menacing Ogre, with Kamiel winning the bid 5 to 3. Both 3/3's then trade in combat, leaving the board empty except for the Rift. 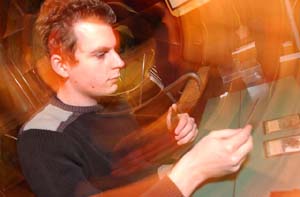 Kyle makes a Riptide Biologist and a Mistform Dreamer to start nibbling away at Kamiel's life, whose plays are a Krosan Tusker and Venomspout Brackus in consecutive turns. A Ghosthelm Courier allows the Dreamer to attack regardless. Kyle's Tribal Golem solidifies the defenses some more. Next attack, Kamiel Smothers the Ghosthelm Courier to allow him to shoot the Dreamer with the Venomspout Brackus. Still Kamiel is at 5 life – making that Rift look very dangerous. Kamiel sends in his two beasts in a last ditch effort. Kyle blocks the Tusker with the Biologist, allowing Kamiel to Vitality Charm that Tusker and Tribal Unity for five.... dealing exactly 20 damage to Kyle. 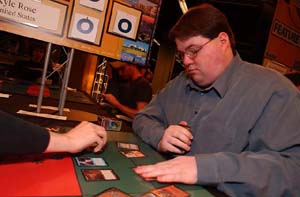 Kyle tries to lock up the ground pretty quickly next game, with a turn 3 Mistform Wall. It gets Skilled up on his next turn, only to be Smothered by Kamiel. In the meanwhile, Kamiel made a turn 3 Snarling Undorak thanks to a Wirewood Elf. Kyle comes back with a Menacing Ogre, again losing the bid: 4 to 3. It gets chumped by a Wirewood Herald which fetches an Elven Riders. That hits the board next turn but Kyle plays another bomb in Sparksmith – which isn't too impressive considering all of Kamiel's creatures are 3/3's. Spitting Gourna changes that statistic a bit for Kamiel, adding a nice 3/4 to the situation. Undaunted, Kyle then plays a Mistform Skyreaver but goes down to a Dirge of the Dead on Kamiel's side.

"I sure messed that first game up" - Kyle