Round 5: Lessons of Mulliganing (or Not)

winner Terry Soh sat down to watch the feature match from the sidelines alongside some of the game's biggest names. Like Osyp Lebedowicz and Anton Jonsson, Terry had taken a third loss and was effectively eliminated from making Day Two. 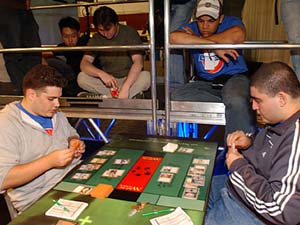 "Terry, don't you know you can't Day Two a tournament after winning the Invitational? You should have gone to a GP first or something," Osyp chided the Malaysian player.

The tournament had been tough on Invitational winners and TOGIT - excuse me, old habits die hard - 7 Kings members alike. Both Billy Postlethwait and Antonino DeRosa had picked up two losses through the first four rounds and one more would send them to the rail alongside King No. 1. In addition to being the fourth and seventh Kings on Osyp's squad, the two players also played alongside Alex Lieberman in Atlanta as Big-Tyming w/A DeRosa.

All three players from that 10th-place team in Atlanta were at the same draft table during Pod 2, although Lieberman came over quite early during Game 1 to inform them that he had picked up the crucial fourth win he needed to ensure a Day Two berth.

As for the other? Osyp offered a plan with a grin toward Postlethwait who has been the unofficial 7 Kings whipping boy all weekend. "Whoever doesn't make it to tomorrow…wanna help me test block? Billy?"

This game started off very slowly with both players trading Shinen of Star's Light. Postlethwait was content to nibble away with his Genju of the Falls while DeRosa tried to make the most of his Harsh Deceiver by doing blind reveals to maximize his mana. It worked once but the next time he showed off Devouring Greed.

Split-Tail Miko took most of the wind out of the Genju's sails and Billy's Mothrider Samurai was sidelined with Cage of Hands, leaving him with the Genju and Shimmering Glasskite to race against the Devouring Greed he knew DeRosa was holding.

Silverstorm Samurai ambushed a Dreamcatcher but Billy cashed it in with Hundred-Talon Strike on an unblocked flier. DeRosa cracked back with Harsh Deceiver and the Samurai. Plow through Reito dropped Billy down to nine. When DeRosa played Cruel Deceiver, Billy sighed and said, "Devouring Greed."

DeRosa was mock-impressed, "Wow, you are so smart. Nothing gets by you. Can you tell me who is going to win?"

Billy could no longer attack and he played out his hand with Innocence Kami and Hand of Honor.

DeRosa played Genju of the Fields - careful to not put it on a summoning-sick land. Antonino started moving his creatures around in the red zone. Billy looked at the Genju skeptically, "You have to make him a man first."

"Yeah, yeah…I am just trying to figure out how you will block."

Finally he sent in just the Samurai and the Genju. Billy double-blocked the Samurai and put the Innocence Kami in the way of the land. DeRosa saved his Samurai with his healer and Billy lost his Glasskite. 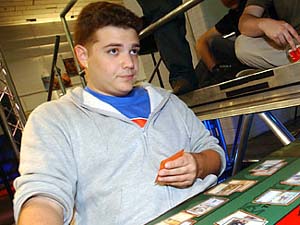 Billy tried to delay the inevitable.

Billy could not muster an attack and fortified with Tori Watchward. When DeRosa announced his own attack he also backed down from a confrontation after Billy tapped his Miko.

Mystic Restraints locked down Silverstorm Samurai and DeRosa backed away again. This time he played Kami of the Waning Moon - he now had a lethal Devouring Greed next turn. He was frustrated as his friend took a long time with his turn.

"Sure." Billy tapped down Harsh Deceiver and tried an alpha strike to at the very least lower the spirit count, but DeRosa was able to block with just his Genju and Billy shrugged and reached for his sideboard.

DeRosa led off with Genju and Billy played Hand of Honor. DeRosa "cycled" Curtain of Light on the newest white knight.

"When are you doing that?" squinted Billy as he looked at his hand.

"You can't ninja me," laughed DeRosa, not really answering the question.

Billy narrowed his eyes but let it slide - he shouldn't have, though. DeRosa could only use the spell after blockers had been declared. Had he read the card he would have been able to counter the spell by returning the guy with his ninja, prevented DeRosa from drawing a card, and drawn a card with his Ninja.

Billy added Kitsune Loreweaver and Genju of the Falls. DeRosa sat back on his Genju next turn and animated to block Billy's two ground creatures. Billy basically sealed the game with a Consuming Vortex that served as a one-two punch of land destruction and enchantment removal. 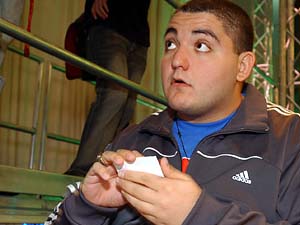 Antonino kept an eye on the rail.

DeRosa started to climb back in but he could not overcome the fast start from Billy, who topped out with an Innocence Kami. Billy attacked with everything and used Hundred-Talon strike to untap his Innocence Kami and lock down a potential blocker.

"Unless you have something you are dead," said Billy.

Billy had chump blocked a creature the previous turn. He laughed when he was asked why he did that if he was able to win on the next turn.

"I didn't realize that I could kill him until the next turn. I guess I was worried about him using Plow through Reito on his guy."

Osyp rolled his eyes as he looked at the hands each player decided to keep. DeRosa kept a very slow hand with five-drops while Billy decided to keep a hand with three plains and blue creatures.

DeRosa made a spirit token end of turn and bashed in for a point. Neither player did anything - Billy had only Plains while DeRosa's curve went from one to five. Eventually DeRosa hit his magic number and began playing out Kami of the Painted Road and Kami of Tattered Shoji. Billy hit an Innocence Kami with five Plains in play which was effectively a quadruple mulligan.

The tapper stepped into the path of an oncoming 2/5 and when DeRosa was able to kill it with Plow Through Reito that was all the incentive Billy needed to scoop up his cards.

As soon as the match was over, Osyp began giving Billy guff about the hand he kept.

"Any time you have three lands in your hand and still need to draw a land to cast your spells you have to mulligan that hand," he said. "It doesn't matter how good your deck is if you can't cast anything."

DeRosa started to laugh but Osyp cut him off, "You are lucky to have won. You had no business keeping your hand either."