Round 5:
Lords of the Lands

Speaking with Raphael Levy before the tournament, the French Hall of Famer – very much at home in French-speaking Montreal – said his team's testing the week before the tournament left him very comfortable playing midrange Bant, a deck many had abandoned long before. While everyone has been caught up in a race to Nephalia Drownyard each other out in similar decks, Levy had gone back to the future with Centaur Healers and some splashed Kessig Wolf Runs.

Gleicher was on the Bant Plus plan as well, but had opted for a more traditional black splash for Nephalia Drownyard. What wasn't traditional was the four Abrupt Decays he had, likely to fight the Boros Reckoners that were littering the tournament floor.

On, and both were sitting on comfortable 3-1 records coming into Round 5. 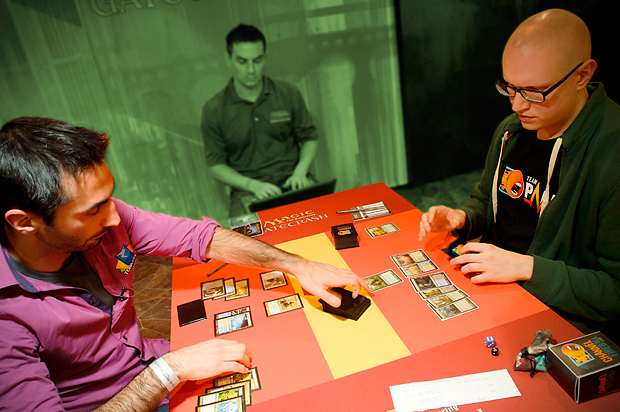 David Gleicher and Raphael Levy put their Bant decks to the test. Would Gleicher's Nephalia Drownyard leave Levy in a drought of cards, or would Levy's Kessig Wolf Run lead the charge?

It appeared as if we were in for a bit of a marathon in this matchup. Both players had plenty of ways to gain life and plenty of control elements. Gleicher even had access to Prime Speaker Zegana, which I was, admittedly, a bit excited to see in action.

And with all of the ways both players had to extend the game, odds were good we'd get to see the Simic guild leader come into play at some point during the match.

Gleicher was on the play, but speed and tempo only mattered so much in this matchup of Farseek-based control decks.

Speaking of Farseek, both players cast copies of the M13 Sorcery on their second turns, fixing their colors and speeding themselves along towards, well, something.

The first something was Gleicher's fourth land, the very important Nephalia Drownyard. If the game went long – and chances were it would – Nephalia Drownyard would be instrumental in stealing the game. Gleicher started using the land to go after Levy's deck immediately.

But neither player was content to leave the board open and unattended. Levy made a Restoration Angel and Centaur Healer while Gleicher fired back with a Thragtusk and a bunch of open mana.

Augur of Bolas found Levy a Supreme Verdict, but Gleicher paid it little mind as he flashed in Restoration Angel to blink his Thragtusk, gaining another 5 life and a Beast in the process.

A whole lot was going on, but as far as life totals were concerned, the two players were basically treading water, with Gleicher still at 22 and Levy merely down to 15.

During the course of their back and forth parrying, Gleicher managed to discard an all-important Kessig Wolf Run off of Levy's deck with a Nephalia Drownyard activation. Without a way to deal tons of damage quickly, Levy would struggle to close the game out, and he only had one more left in his deck.

Where he wasn't struggling was in options. Augur of Bolas - off a Restoration Angel - found Sphinx's Revelation, but Gleicher fired back with a Detention Sphere removing every Angel - his included - from the battlefield.

Revelation refilled Levy's hand, giving him tons of options, while Gleicher was stuck on just Supreme Verdict and Restoration Angel for cards in hand.

When Levy played out both a Centaur Healer and a Thragtusk, that was enough to get Gleicher to pull the trigger on Supreme Verdict. And, just like that, the board was (nearly) clear again.

Oh, and both players still had life totals in the teens.

Another Thragtusk restocked Levy's board, but his deck had been whittled down to 20 cards. Unfortunately for him, those 20 did not include Kessig Wolf Run, the second copy of which Levy saw make its way to his graveyard.

Levy attacked in with his two Beasts, prompting Gleicher to attempt a Restoration Angel. Azorius Charm sent it packing.

With Gleicher still on two cards, Levy had to do some math. He wanted to Sphinx's Revelation, but with only 16 cards left in his deck, he couldn't necessarily do it for the maximum amount. Attempting to sequence his turns, Levy chose to draw a modest four cards. 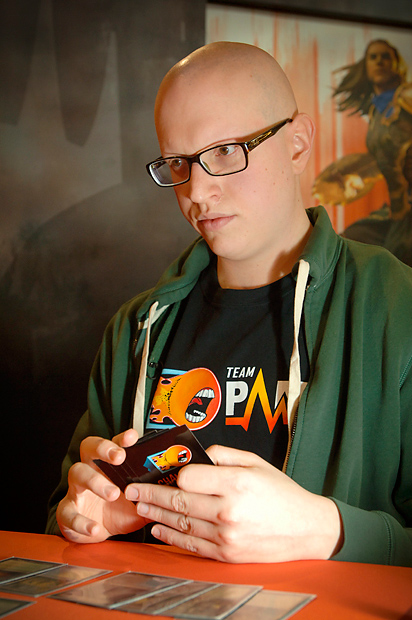 Gleicher's lands begin to do their work, leaving Levy without his much needed Kessig Wolf Runs.

Another attack brought about another Restoration Angel, snagging the Beast token, but leaving the Thragusk to break through. Detention Sphere then moved the Angel out of the way, leaving Levy free to attack.

But Gleicher, who was at 6 life, wasn't done. He attempted Snapcaster Mage, but saw it fall to Dissipate.

Then, with Levy on just one card, Gleicher hit one of his outs, casting Abrupt Decay on his first Detention Sphere, freeing an Angel to block and blocking just enough to deck Levy.

"That was a fun game," Gleicher sighed.

No Farseek for Levy this time, but an Augur of Bolas did turn up...well, nothing, actually. But, hey, 1/3s are good attackers, right? Levy followed up with a Centaur Healer, plotting out something of an awkward beatdown strategy.

Gleicher did have the telltale sorcery, and followed it up with a Duress, revealing Supreme Verdict, Sphinx's Revelation and...Akroma's Memorial?

Yes, Levy had brought in the seven-mana, haste, flying and all kinds of stuff-granting artifact to make his creatures all the more deadly against his opponent's Supreme Verdicts and Thragtusks.

But Gleicher had other things in mind, resolving Jace, Memory Adept and immediately drawing a card. He did, however, choose to target himself with the ability. Snapcaster Mage on Duress then let him snag the Akroma's Memorial before it could become a problem.

That left Jace alive for another turn, but the ability put one of Gleicher's Garruk, Primal Hunters into the graveyard. Surely that wasn't what he intended when he was targeting himself.

Levy kept up his motley attack force with a Thragtusk, splitting his attack between Jace and Gleicher's life total. Gleicher tried to find an answer by cycling Azorius Charm, but came up empty and lost his blue planeswalker. His only solace was a Thragtusk in his draw step, but he was otherwise holding just lands and had to pass back without much going on.

An end-of-turn Restoration Angel gave Levy even more attackers and sent his life total to...well, more than what really mattered right now. It was over 30. If that matters ever, we'll check back in on it.

On his turn, Levy cracked in with everything but Thragtusk, opting to play around Supreme Verdict for the time being. Gleicher, realizing it was his only real out, took the damage and fell to just 7 life.

When Gleicher drew nothing and Levy repeated the attack the next turn, plus Thragtusk, Gleicher found himself quite dead despite starting the game quite far ahead.

Another turn two, and another Farseek for both players. Gleicher even used Snapcaster to flash his copy back and accelerate to five mana pretty quickly. Levy then found his own second Farseek with Augur of Bolas.

So, basically, everyone had mana.

Levy used his mana to cast a Thragtusk while Gleicher took to the air with Restoration Angel and the long-promised Prime Speaker Zegana. Drawing four cards, Gleicher suddenly found himself in very good position, as another Restoration Angel in hand could easily serve as an Opportunity at a moment's notice. 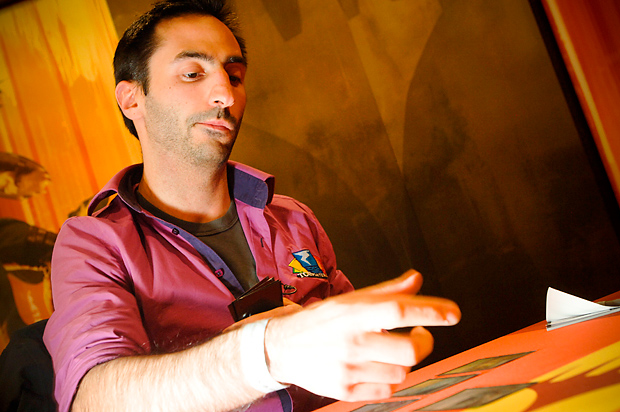 Levy's Kessig Wolf Runs let him get aggressive when he needs to be.

Seeing his long game slipping away, Levy got aggressive. He attacked his Thragtusk into Gleicher's board with Kessig Wolf Run available, trading it with Gleicher's Restoration Angel and passing the turn after casting Centaur Healer. He even followed up with Restoration Angel on Gleicher's next end step.

This time Levy attacked with his entire team, prompting a flurry of responses from Gleicher.

First, his Zegana blocked the Beast token. Then, when Levy pumped the token to a 5/3 with Kessig Wolf Run, Gleicher Azorius Charmed the token and removed the Centaur Healer with Abrupt Decay. When the dust settled, Gleicher still had his Prime Speaker Zegana and stood at 10 life. Levy, now with just Restoration Angel and Augur of Bolas in play, was down to one card.

Levy, knowing he had to stay aggressive, used Kessig Wolf Run to trade his Augur of Bolas for Prime Speaker, and was able to keep Gleicher off a large Sphinx's Revelation with Dissipate.

But Gleicher still had a ton of cards. Supreme Verdict cleared the board while Garruk, Primal Hunter gave Gleicher a way to keep his board and hand stocked.

Levy, however, found a second Sphinx's Revelation. That, in turn, gave him Akroma's Memorial and Thragtusk, turbocharging his attack step.

A pair of Restoration Angels kept Gleicher alive (he was at 7 life) and killed Thragtusk, but with no way to gain life and facing Kessig Wolf Run, Gleicher was in trouble.

Levy was doing some math, but little did he know, he could win simply by pumping his Restoration Angel with Kessig Wolf Run. Gleicher, despite three cards in hand and open mana, had nothing of value in hand.

After doing some math, tapping and untapping and retapping his lands, Levy ran over Gleicher for exactly enough damage.

After the match, Levy explained the odd-looking Akroma's Memorial.

"Sometimes boards just get clogged and you need a way to break through. Aroma's Memorial and the Gisela, Blade of Goldnight can both do that," he said.

But, he said, the Kessig Wolf Runs that were so important in Game 3, and losing them were what hurt him Game 1, as it is his primary plan to beat the kinds of decks Gleicher was representing.