Like a good breakfast starts the day, a strong start in Standard often leads to a strong performance at Worlds. 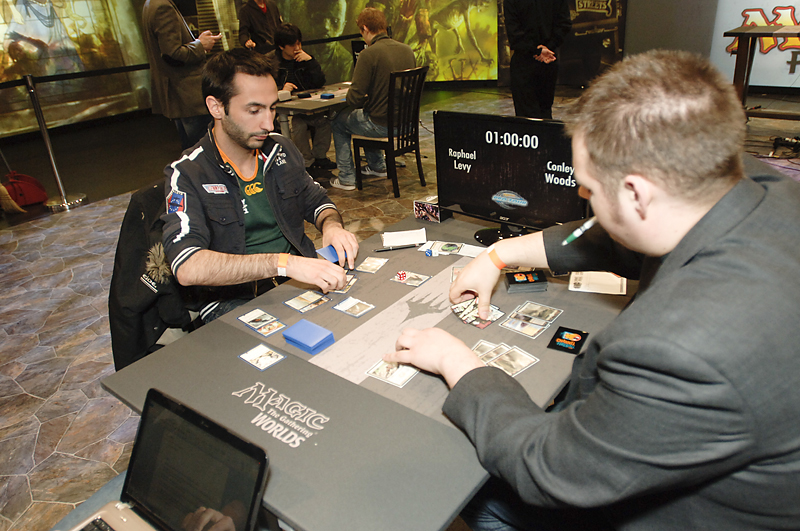 Raphael Levy and Conley Woods square off to see who can keep their Standard records spotless going into the sixth round.

At 4-0, Raphael Levy had both lead off with strong starts that could catapult them to a strong finish, and the winner here would be one round away from a perfect Day 1.

Their decks, despite both being white and blue, were vastly different. Woods continues his recent trend of playing the Team ChannelFireball deck instead of going rogue and is sporting a fairly standard Tempered Steel list. It certainly makes copying the list down easier for this reporter, since it has 73 of 75 cards that Brad Nelson's list had from Round 1.

Levy, on the other hand, has a Blue-White Control deck with Day of Judgment, Oblivion Ring and only Snapcaster Mage, Gideon Jura and Midnight Haunting to supply the necessary creatures for picking up Sword of Feast and Famine.

Woods won the roll and kept his seven, while Levy mulled to six on the draw.

As Tempered Steel does, Woods got off to a quick start on the play with Inkmoth Nexus into two Signal Pests on the first two turns and an Etched Champion on turn-four. Fortunately for Levy, he was able to slow the beats with a Negate on a Glint Hawk Idol, even if he found himself down to 12 on turn-four.

But the next attack worked out well for Levy, even as he was stuck on three lands. Midnight Haunting ambushed the Nexus and a Signal Pest. He fell to 7 life, but Woods made no follow up, instead choosing to leave Moorland Haunt mana available.

Day of Judgment cleared the board, but Wood's Haunt tokens were able to keep pecking away. Until Gideon Jura came to stand in the way at least. Woods made a third token and took Gideon Jura down to five, but had to then play out the Memnite and Tempered Steel in his hand to have any hope of breaking through the planeswalker brick wall.

Looking to take control of the game even further, Levy used Snapcaster Mage to re-cast Day of Judgment and attack with Gideon Jura. 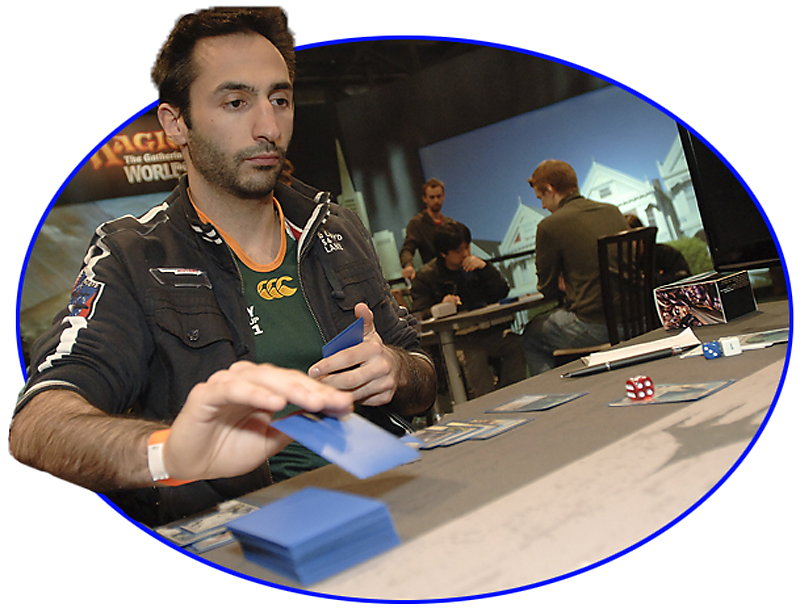 Woods tried to keep up with Moorland Haunt Tokes, but Gideon Jura made sure the next several turns were kept on lock-down as a Consecrated Sphinx showed up. In only took two turns of Gideon Jura plus Sphinx to convince Woods to move on to the second game.

Conley led with a turn-one Glint Hawk followed by a turn two Glint Hawk Idol. A Mox turned on the Idol next turn, but Divine Offering turned it off permanently. The post-combat Tempered Steel had only an Inkmoth Nexus to pump at the moment, but would threaten to make any of Wood's small threats into larger ones quickly.

The Timely Reinforcements put Levy up on life, but when Woods played a second Inkmoth Nexus and hit for three poison, it looked like Levy could be in trouble.

It only got worse when Woods attacked with two Inkmoth Nexus and two Glint Hawks the following turn, with Levy on only four mana to answer. Snapcaster Mage on Divine Offering to kill a Nexus helped stem some of the poison, but Woods had a third Nexus to keep the pressure up.

Oblivion Ring answered the Tempered Steel, but even then Levy was still at 6 poison facing two Inkmoth Nexus. A second Divine Offering killed one Nexus on the next attack, and Levy went to seven poison as Woods, while still threatening, appeared to be running out of steam.

Levy studied the board and his attacks, choosing only to get in with Snapcaster Mage, while Woods kept his eyes squarely on his opponent. With no cards in hand, Woods was running short on resources. A Nexus and a Squadron Hawk put Levy to 14 life and 8 poison, and Woods followed up with a Vault Skirge.

Forbidden Alchemy in Levy's main phase gave him some pause, and then gave him a Day of Judgment over three lands. All three Soldier tokens and the Snapcaster Mage attacked, signaling the sweeper that followed.

Again, however, Woods was able to put Levy on the brink with an attack to nine poison. Cycling through both ends of a Think Twice, Levy might have been feigning weakness to the Nexus, since he was holding Dismember the whole time. However, he found a Ghost Quarter, which took care of the land more efficiently.

Woods merely made some Myr tokens from Origin Spellbombs and a cast a Memnite. The three attacked Levy to 10 and were soon joined by an Etched Champion. Levy flashed back Forbidden Alchemy, pitching three lands. Another Timeley Reinforcements didn't net Levy any life, but it did get him three tokens to stand in the way of Wood's tiny army.

However, that tiny army got huge pretty quickly when an Oblivion Ring off the top of Wood's deck brought back the long-forgotten Tempered Steel. Suddenly, he was attacking with three 3/3s and a 4/4.

Two Soldier tokens jumped in front of two Myr and a Dismember killed the Memnite. Two life from the Dismember and four from the Etched Chamption put Levy to a suddenly precarious four.

Oblivion Ring on the Tempered Steel helped, but Levy still fell to one on the next attack. Moorland Haunt made things even worse, as even Day of Judgment likely wouldn't be enough. A Consecrated Sphinx wasn't the answer Levy was looking for and Woods evened it at one game apiece.

With only 18 minutes left after an epic back and forth game two, the feature match area was fully focused on the last match still going under the spotlight.

On the play for the first time, Levy kept, as did Woods.

Turn one Origin Spellbomb wasn't exactly explosive, and Woods was slowed even further when Oblivion Ring took out his Glint Hawk Idol.

However, that allowed Woods an opening to resolve Shrine of Loyal Legions and he followed it up with a Glint Hawk Idol the following turn. Still, Levy had to feel pretty good about getting to turn five without any attacks yet.

Gideon Jura, the bane of Wood's existence earlier in the match, threatened to shut down the board. With only an Idol and an Inkmoth available to attack, Woods would have to find an answer quick.

And he certainly did. Spellbomb became a Myr at the end of Levy's turn, and a Tempered Steel and Mox Opal allowed Woods to kill the Planeswalker on his next attack with the Myr, Idol and Nexus. 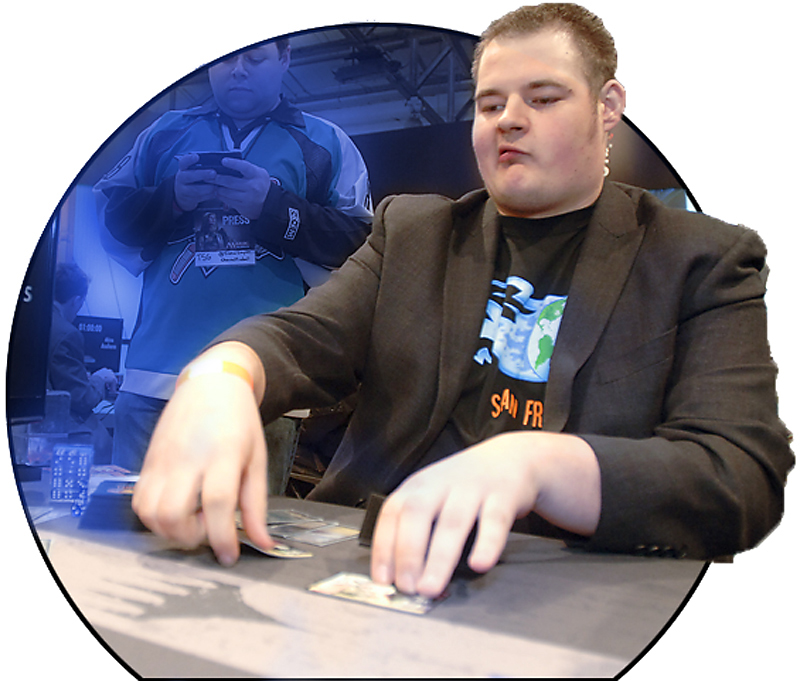 Apparently Conley Woods can have it all, including a 5-0 start.

Levy had another Oblivion Ring to remove the Tempered Steel, but Woods had a backup in his hand, plus a Shrine of Loyal Legions. He attacked for seven and threatened with a massive board to Levy's empty one.

Day of Judgment cleared out a token and a Memnite, but left a Glint Hawk Idol, two Shrines and an Inkmoth Nexus around.

A second Glint Hawk Idol turned on the first and Woods attacked Levy down to nine life as Levy shook his head at the sweeper-proof board in front of him. He played a main phase Forbidden Alchemy and shook his head at his draw again. Nothing in the top four gave him any relief, and he extended the hand in the face of a Shrine ready to burst its loyal legions forth.