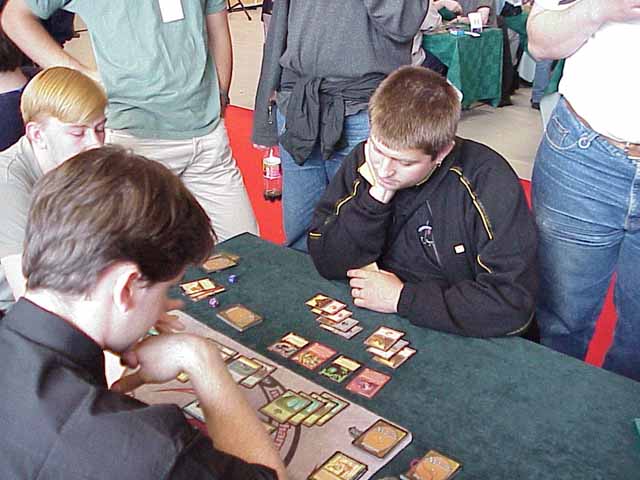 These two players are well known faces on the Pro Tour - they've each been to many Tours. Jakub won the World Championship in 1997, and made a top 8 in the 1999 event. He also made the top 8 of PT LA 3, and has a couple of top 8 finishes in European Grand Prix. Manuel hasn't yet made such a breakthrough at the Tour, his best finish being a top 32 in Rome. However he excels on the Grand Prix circuit with three quarter-final appearances at Lyon, Cannes and Stockholm. He has also done well in his country's National Championships.

Manuel has a blue and green deck with decent ground creatures such as Silverglade Elemental and Blastoderm, and flyers like a pair of ribbon snakes. Jakub's deck is black and red with decent amounts of removal. His creatures are fairly large compared to the standard red/black fare with a Pit Raptor and a Zerapa Minotaur among them.

Jakub wins the dice roll and chooses to play first. His draw contains only two land but is pretty good apart from that whereas Manuel has only a Pygmy Razorback for a spell and six land ! Both players elect to keep their draw.

Jakub draws a land quickly and is able to summon a Bog Smugglers on turn three to go with his Agent of Shauku. Meanwhile Manuel has avoided drawing more lands and is able to get out a Blastoderm and a seal of strength, along with his Pygmy Razorback by turn four. At this point Jakub has reduced him to 16 life.

Jakub draws a land on his turn five and casts a Shock Troops. Manuel attacks him with the Blastoderm and the Razorback, which trades with the Bog Smugglers. He then drops a Blockade Runner and a Cloud Sprit, so it seems that he has the momentum. Jakub can deal with the Runner - he has a Greel's Caress, but his next turn is bad news. He draws a land and taps out to Flay, but Manuel has a Withdraw ! Obviously he goes for the Agent of Shauku and his own Blockade Runner.

Jakub is now under serious pressure and decides it best to Shock Troops the Cloud Sprite on Manuel's next attack. This is a surprising as the Seal of Strength is still in play, but with the Blastoderm about to dies to it's lack of fading counters, Jakub thinks that his Snuff Out will stop the damage - by now he is one life. Unfortunately for him, Manuel topdecks a Ribbon Snake (he had only land in his hand) and then another one next turn. Jakub only has one flyer in hand, so the Snake finishes him off.

In game two Manuel gets another poor draw, with two forests and only blue cards in hand. Again, he keeps it. He draws only one more land the entire game - another forest, and his only play is a turn five Vintara Snapper. This isn't enough to stop Jakub's team of Ridgeline Rager, Agent of Shauku, Zerapa Minotaur, and Kyren Sniper. On to game three.

Manuel goes first in this game but it's Jakub who gets the quickest start with an Agent of Shauku (again !), a Bog Smuggler and a Rathi Fiend by turn four. Manuel has a Balloon Peddler and an Oraxid. Both players have good plays for turn five, a Flowstone Crusher from Jakub and a Silverglade Elemental from Manuel.

The game seems to be tipping Manuel's way as he Withdraws and enchants the Elemental with a False Demise. Jakub attacks trading his Crusher for the Demise, and drops a couple more creatures. While Manuel may have a decent board position he has only land in hand and is forced to look on as Jakub plays a Pit Raptor.

The Raptor quickly lowers Manuel's life total while he is unable to find a satisfactory solution - a Spidersilk Armor merely delaying the end because of the Raptor's first strike combined with the Agent of Shauku's ability makes it impossible to block. In the end Manuel can only delay the end for five turns as he draws lots of small creatures but no answer.