Round 5: Mark Zadjner vs. Jeff Cunningham 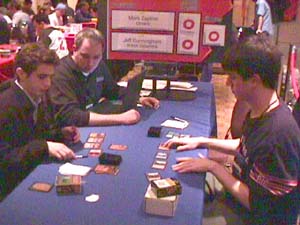 I saw these two playing in the finals of a practice draft last night, and Zadjner's U/G/r deck beat Cunningham's R/G in three. Would it be foreshadowing? Zadjner is playing blue and red again, with some wacky version of Psychatog featuring tons of burn, Merfolk Looters, Flametongues, and just enough black for Recoil and the 'Tog; Cunningham is with the R/G beats – his main deck is a card-for-card copy of the deck that won the JSS Championships in Orlando.

Cunningham is a known quantity these days – Top 8 in San Diego, finals at GP Tampa, but who is Mark Zadjner. He was described to me as "The Canadian PTR," meaning he's a walking spectacle – loud, grating, and overconfident. When asked of his Magic accomplishments, he said that he'd been to three Pro Tours, but "I'm no Jeff Cunningham."

Cunningham started with a Grim Lavamancer and a Volcanic Hammer to the dome. Zajdner then started casting Merfolk Looters. Both were dispatched by Cunningham, one with a Firebolt, and the other with a Flametongue Kavu. Zadjner cast his own FTK, offing Cunningham's, but Cunningham had a Violent Eruption to kill Zadjner's. Zadjner resolved a Fact or Fiction, but a Firebolt, a Lavamancer ping, and an Urza's Rage ended Game 1 in a quick minute. 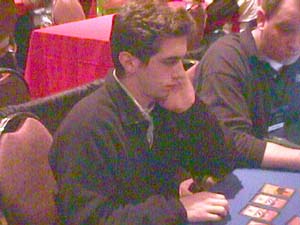 Cunningham played no green lands and showed no green spells in Game 1, prompting Zadjner to say, "I thought you were playing red/green originally. This match-up is a little worse for me. Well, maybe you are red/green and I just didn't see it."

After they shuffled, Zadjner lamented his draw.

Zadjner's early game was mana-disruption: an Ice on a land and then a Recoil on a land the following turn. Cunningham just waited until he could cast a Yavimaya Barbarian (resolved), a Call of the Herd (countered), and flashed back the Call (killed with Fiery Temper). Zadjner didn't do anything offensively at all.

Cunningham drew a Reckless Charge and used it to give his Barbarian +3/+0. Zadjner tapped two Shivan Reefs and killed it with two Engulfing Flames.

Zadjner: "I feel like I'm down card advantage, but I'm really ahead in some sick way." 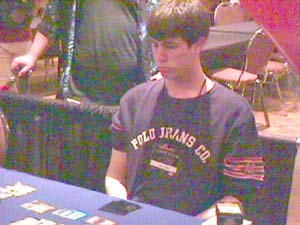 Cunningham had been holding a Flametongue for just such an occasion, but Zadjner had the little combo of 'Tog + Fiery Temper, killing the FTK and helping keep the Psychatog alive. Cunningham then put out a Mongrel and said go, holding a Violent Eruption.

A victory for red/green! Stop the presses!