Round 5: Masayuki Higashino vs. Masashiro Kuroda 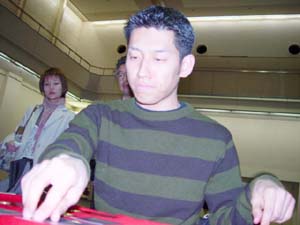 Masashiro Kuroda may have shown some intimidating stares en route to his Team Masters victory with PS2 in Venice last weekend, but there's only one thug in Japanese pro Magic, and that's Masayuki Higashino. A fixture from way back, Higashino can always be seen wearing all black and lingering at the top of the standings. Today he's added a bomber jacket to his ensemble.

Kuroda kicked off with Festering Goblin, and though he had Wellwisher and appropriate mana, he cycled Barren Moor on his second turn, ensuring he'd have the all-important three-drop. Higashino convinced him to hold back on the beats with a turn-two Withered Wretch. When Higashino made no play on his third turn, Kuroda swung in with his morph. Higashino blocked, and Kuroda stole tempo with Vitality charm. He added a second morph to the table.

Higashino responded with a weak Vile Deacon. Still, Kuroda was unwilling to risk his morphs (Treespring Lorian and Skinthinner) in combat. He hit for one and passed it back. Higashino played his fifth land and passed it back. Kuroda didn't draw his sixth land, and hit for one more. Finally Higashino made a move. He swung for three, then tapped six for Glowering Rogon, showing Rogon and Hundroog. Kuroda unmorphed Skinthinner to shut it down, and bashed for five. He untapped and added Wellwisher and another morph.

Higashino played another Rogon (showing only Hundroog) and held back. Kuroda cracked it with Cruel Revival and turned his whole team sideways. Higashino was at just twelve. He ate the Wellwisher and dropped to five. Mountain was waiting for him at the top of his deck, increasing his options. He played Snarling Undorak with two black and a red open.

Kuroda wasted no time smashing. Higashino killed both morphs, losing his Deacon and falling to two. Kuroda played a Skirk Marauder face-down. When Higashino could only manage a Wirewood Savage and Gempalm Strider, Kuroda showed him the goblin for the win. 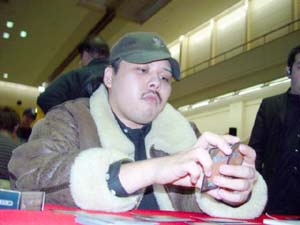 The first play of the second game was Kuroda's Smokespew Invoker. Higashino had just three swamps and no play. Kuroda hit for three and added a morph. Higashino cycled Hundroog, and then dropped Vile Deacon. Kuroda played his fifth land and attacked immediately. Higashino traded his Deacon for the Invoker. Kuroda added another morph. Higashino dropped Screeching Buzzard, and traded it for the newer morph, which turned out to be Haunted Cadaver, as well as a land from Kuroda. Kuroda dropped Snarling Undorak, relentless.

When Higashino showed Glowering Rogon it looked like it might be the end of the line for Kuroda's pressure, but it went unamplified. The Undorak was free to swing for three, and Kuroda added a Needleshot Gourna to the table. Higashino dropped Wirewood Savage with four mana open. The Gourna dropped Higashino to seven, and Kuroda added a Screeching Buzzard. The top of his deck refused to let him run out of gas.

Higashino thought hard on his eighth turn. Eventually he chose to Dredging back a Buzzard of his own and play that. Kuroda attacked with all his men. Higashino put his Savage in front of the Undorak, his Rogon on the morph, and his Buzzard on the Buzzard. Kuroda flipped his Treespring Lorian to leave Higashino with no board and one card in hand, facing off against Undorak and Needleshot Gourna. Higashino had no trouble scooping. Kuroda didn't even need the Pacifism still in his hand, boarded in out of respect for Higashino's beasts.