on Sonne and Osyp Lebedowicz were teammates on TOGIT and its variations for years. In fact, they likely counted themselves as friends once, but they had a serious falling out, and the pair have hardly spoken since. That's the background on this draft match of 4-0 Americans. 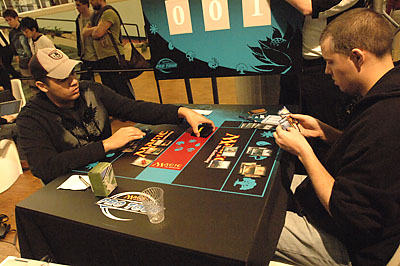 Sonne opened the match action with a turn-two suspended Errant Ephemeron, while Osyp cast Prismatic Lens and then Mana Skimmer. The Skimmer attacked on turn four to put Sonne's lone red source of mana on lock. Osyp followed this with Skulking Knight and Pit Keeper, and then smashed a face-down Brine Elemental with Orcish Cannonade, taking easy control of the game.

Unfortunately for Osyp, Sonne found a new source of red and used Grapeshot (plus Ephemeron coming into play) to kill both Pit Keeper and the Knight and get back in the game.

Osyp shrugged, played Melancholy on Sonne's lone beastie, and kept swinging with Mana Skimmer, dropping Sonne to 4. At this point, Osyp forgot to pay upkeep on his Melancholy, forcing him to spend Smallpox to clear the board and both players' hands.

The game then became a topdeck race, and one that Osyp had a clear lead in, since he had 18 life to Sonne's 4. Unfortunately, Sonne ripped 3 straight creatures off the top of his deck, while Osyp cast another Pit Keeper and then Trespasser il-Vec. Sonne wiped them both with Subterranean Shambler, giving him an excellent Game 1 comeback.

Game 2 started fast with Osyp throwing down Goblin Skycutter and Simian Spirit Guide, but Sonne held the fort with Dreamscape Artist and Dream Stalker. After a brief stall, Osyp played Clockwork Hydra, which Sonne killed via Rift Bolt plus Grapeshot, tossing the extra point at the Skycutter for good measure.

At that point, Osyp started drawing nothing but lands, and Tectonic Fiend from Sonne quickly finished the match.