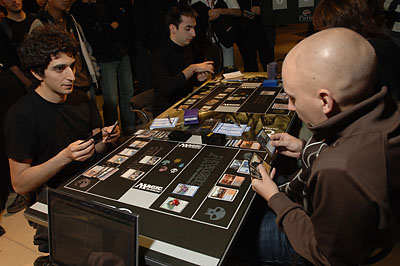 big names met in Round 5, ready to add some impressive Magic to their impressive resumes. Olle Rade was in the first Hall of Fame class, and came back to dish out his best with a storm deck based not around Dragonstorm, but Ignite Memories instead. Gabriel Nassif needs no big introduction either: He is a man whose next Sunday appearance should be due any event now. Both players were on a 3-1 record coming into this match.

While Gabriel played first, Olle had the more impressive start with double Suspend action: Lotus Bloom and Ancestral Vision appeared in his removed-from-game zone. It smelled like combo and Gabriel knew it, digging for permission with Compulsive Research but feeling safe for the moment because both powerful spells were still suspended.

Another Compulsive Research from Gabriel was met by Remand from Olle, who banked on his Lotus Bloom coming in to boost his two-land manabase (Rakdos Carnarium and Island). Gabriel had a Remand of his own for it, a powerful play which visibly set back the Scandinavian. But the Swedish Hall of Famer went for it, all in the same upkeep. Clockspinning allowed his Ancestral Vision to resolve unimpeded while Gabriel was tapped out. With the help of Seething Song, Olle played Ignite Memories with a whopping storm count of five, putting six copies on the stack and hitting Martyr of Sands once, Azorius Signet twice, and Muse Vessel thrice.

That meant 17 damage to Gabriel, who could do nothing but take it like a pro. He raised his eyebrows as he looked at his hand. Compulsive Research and a white Martyr made his board, while Olle yet again suspended the dynamic duo of Lotus Bloom and Ancestral Visions. Looking quietly confident, he watched Gabriel play a second Martyr. 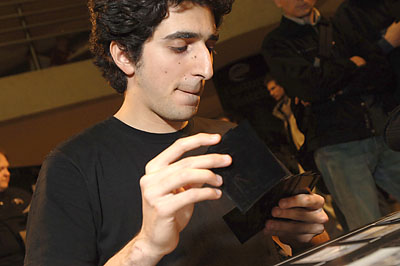 Muse Vessel from Gabriel fell to Remand, and the two Martyrs went beatdown. On the second try, the Vessel resolved, followed by a third Martyr. Olle was reduced to draw-go, but never lost his smile, even when Remand hit his Ancestral Vision. With the Martyrs on beatdown mode and two Ancestral Visions suspended, Olle asked Gabriel to play a bit faster. The Frenchman complied, taking Olle to 6, then to 3, with his little white men.

Olle had one turn left to try and burn Gabriel out. Seething Song and Ignite Memories were the last cards in Olle's hand, and they were just not enough.

Afterwards, Olle mused that he could have won that game if he had played his land differently. With just one blue mana instead of any other, he could have Remanded Gabriel's Remand, which would have upped the Storm count by one and saved the Lotus Bloom to generate even more storm.

The two players didn't think long about their sideboarding strategies. Gabriel brought in 2 Muse Vessel and 3 Circle of Protection: Red, taking out the useless 3 Condemns and 2 Chronosavant. Olle just swapped in some Trickbinds for some Clockspinnings. 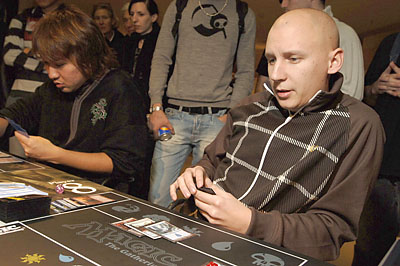 Both players declined to go to Paris - no small wonder, since they were already there - but opted for power starts instead. Olle, playing first, suspended Ancestral Visions on turn one and on turn two. Gabriel's Martyr of Sands and Compulsive Research looked pale in comparison, but when the first Ancestral Visions was about to resolve, Gabriel had Spell Burst with buyback! Nice play against the suspend spells without an actual mana cost. Olle attempted to Trickbind the buyback, which obviously does not work, so the Visions was gone. The very same Spell Burst nixed the next Ancestral Visions, but not the Rift Bolt that killed Gabriel's Martyr.

The first batch of battle was over, now the question was: Who would put the pressure on? Gabriel had Muse Vessel and Circle of Protection: Red. Bad times for Olle, who could merely muster a measly Rift Bolt.

The Bolt and Seething Song helped to make three copies of Ignite Memories, but with 13 life on Olle's side and 17 on Gabriel's, the Ignition was non-lethal. It hit a Wrath of God, a Spell Burst, and a Compulsive Research and took Gabriel to nine. But even though the Circle of Protection: Red was Trickbound, the damage Olle could pile on did not suffice. When Gabriel revealed Wrath and Proclamation of Rebirth on a Martyr activation, Olle knew the game was over.