Round 5: Mike Long vs. Jun Nobushita 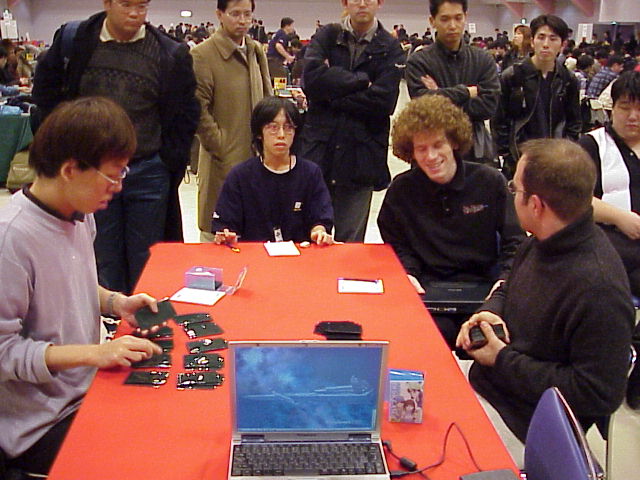 Here's an unlikely pairing. Jun Nobushita and Mike Long have worked together off and on for some time, with Long providing Nobushita decks for several of his top finishes, such as his Top 8's at APACs and Japanese Nationals. This Emperor-Vader relationship has led Nobushita to be nicknamed, uncreatively perhaps, "The Japanese Mike Long".

Today Long is playing a variant of Alan Comer's "Miracle Gro" that made a big splash at Vegas last weekend. Nobushita is running standard New Orleans Donate. Will Long's unholy blue lightning keep the upstart in check, or will Nobushita upend him into the reactor core?

When the question of deciding who would go first arose, Long thrust out his arm, and Nobushita accepted the challenge. The arm-wrestling match was short lived. Long pinned Nobushita in under three seconds, so mighty is he.

Long kept a one-land hand with cantrips. Opt. Brainstorm. Sleight of Hand. Nothing was working for Long. Nobushita played out Sapphire Medallion. Long began slamming his draws on the table, but they refused to cooperate.

Nobushita tried to add to the pain with a bought-back Capsize, but Long Force of Willed. Still he drew no lands. Nobushita tried Morphling. Long had another Force. Finally, Nobushita went for the combo kill. He Forced Long's Force, emptying his hand. Long Dazed, putting an island in hand to fuel Foil.

Now Long had time to draw his second land. It was a while before it happened, but Nobushita wasn't getting anything. Long's Werebear was Forced, his Quirion Dryad Counterspelled. Dryad number two resolved. 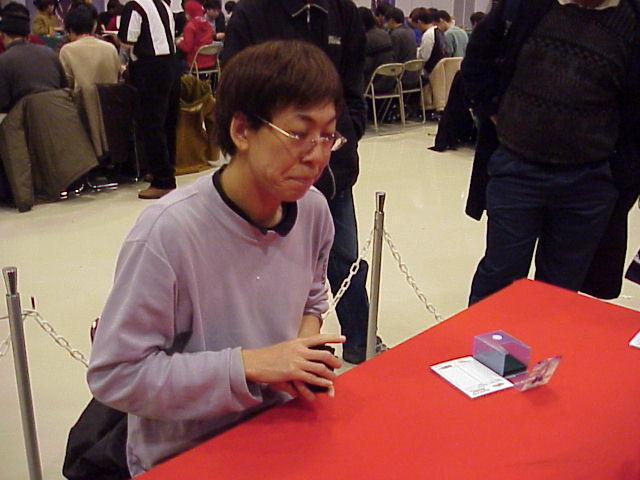 Finally, Nobushita found a Intuition, and grabbed Accumulated Knowledges. The Knowledge itself Long Forced. Next Nobushita Intuitioned for Merchant Scrolls, and used one to fetch Fact or Fiction. That got him Donate and Force of Will, over Thawing Glaciers, Phyrexian Furnace and Counterspell.

All the pieces were in place. Nobushita Forced Long's Curiosity, and then played his combo, countering Long's last-ditch Foil.

Before Game 2, Long offered an intentional draw. Nobushita smiled and declined. Long warned him that he would steal the win from him.

Game 2 looked like a repeat for Long when his two Sleight of Hand failed to deliver a second land. However, he did get Land Grant, and revealed a hand of two Gush, Force of Will, Foil, Quirion Dryad and Brainstorm. Nobu was unable to stop him, and now Long was in business.

He got Tropical Island, and after Nobushita passed the turn back, went for the Dryad. Nobushita countered. Long decided to let it go and invest in Werebear. When that resolved, he Gushed into Winter Orb, which also hit play.

Nobushita was unfazed, even as Long hit threshold. He continued to be unfazed as Long resolved Curiosity and started filling up on countermagic. But smashing for four and drawing a card while he was at it wasn't enough for Long. He added insult to injury with a Land Grant that revealed three Force of Will and three blue cards to go with them. Nobushita accepted his advice to scoop it up.

Long's hand for Game 3 was a novelty, holding four lands. Brainstorm turned up plenty of Action Jackson for him to work with. He started off with Werebear and Curiosity. Nobushita stopped the enchantment with Force of Will, pitching Illusions. He made a Sapphire Medallion, and Merchant Scrolled for Intuition.

Long Brainstormed into Curiosity, and cast it. Nobushita went for his Knowledges. He untapped, played one, then a second, then tapped out for a second Medallion. Long stepped up production with Wild Mongrel, holding Daze, Foil and Hydroblast, as well as two other cards. 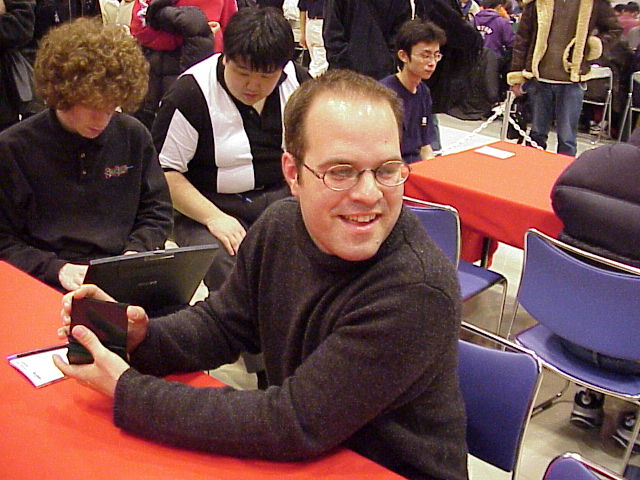 Nobushita needed time. He bought it with a Merchant Scroll that got Hibernation. Long pitched to protect his doggie, but his major threat was gone. He rebuilt. Nobushita played Illusions of Grandeur, needing still more time. Two turns went by and he had no Donate.

Afterwards Long commented that he'd made a mistake, not playing Winter Orb after Nobushita had paid for the Illusions a second time. He was concerned with being able to Foil twice, and failed to notice that Nobushita would still have time to draw into the Donate for the win.