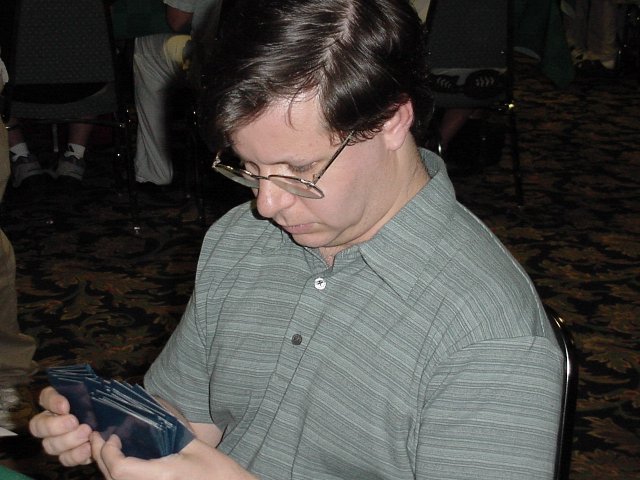 Mike Pustilnik and Steven O'Mahoney-Schwartz played each other in the fifth round of the GP. Both players had undefeated records after starting the day with three byes.

Mike Pustilnik had a great season last year. He finished third in the pro tour player of the year race. He made two pro tour top 8s and won Pro Tour LA. Pustilnik is known for playing original decks of his own design. He won GP Memphis two years ago and introduced the world to Squirrel-Prison, a deck that dominated the Urza Block Constructed format.

Steven O'Mahoney-Schwartz is a well accomplished pro as well. He won Pro Tour LA two and a half years ago and is well known as one of the tour's most consistent and best players.

Pustilnik played a deck of his own design. It was a blue-red-white deck with Galina's Knight, Lightning Angel, Powerstone Minefield, and the usual complement of blue broken cards.

O'Mahoney-Schwartz played a new version of Domain created by Brian Kibler. Dubbed "Dark Domain" by some, it plays several cards foreign to domain decks in the past such as Spiritmonger, Pernicious Deed, and Planar Despair. It also played several of the old classics like Collective Restraint and Global Ruin. 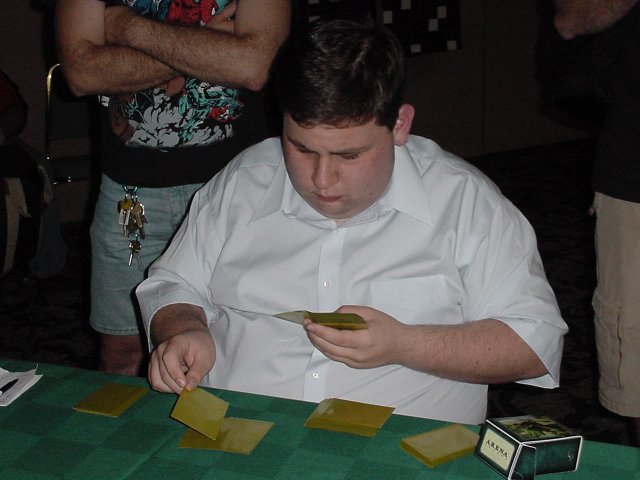 Game two, Pustilnik's sideboard showed up for him. O'Mahoney-Schwartz's attempts to do anything were denied by a hail of Aura Blasts, Gainsays, Absorbs, and Excludes. One Galina's Knight went most of the distance and Pustilnik finished O'Mahoney-Schwartz off with a pair of Prophetic Bolts.