Round 5: Mike Turian vs. Matt Linde 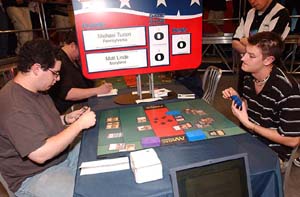 Two of the longest running members of the Pro Tour gravy train met in a round five Feature Match. Mike Turian and Matt Linde each won all three day 1 constructed matches, but each lost their first draft match of the tournament. Turian was running a soldier deck with a splash of blue while Linde's deck is mono-black.

Turian came out fast in Game 1 with Glory Seeker and Zealous Inquisitor. However, when he failed to play a land on turn four he looked over at me and growled. It seems that my former teammate never seems to draw any land when I watch him play.

I was forgiven a turn later when Turian's deck delivered up a Plains and enabled a 4/4 Daru Stinger. Linde had already used his Death Pulse on the early Inquisitor so Turian was pretty happy with his Stinger, but the last card in Linde's hand was Lingering Death. Turian sent in his team and bashed Linde down to 4 before his 4/4 Stinger finished dying and then Turian promptly drew a second one off the top of his deck. One turn later Linde was scooping up his cards.

Linde had two copies of Lingering Death in game 2 along with a Deathmark Prelate and a Cruel Revival, so it was hard for Turian to keep his creatures alive. The Crown of Awe that he brought in from the sideboard came in quite handy, though, since it staved off the Lingering Death of a Zealous Inquisitor and then created a monster that Linde's mono-black deck just couldn't deal with.

Turian even showed off a nice trick by shooting his own Inquisitor with a 2/2 Daru Stinger so he could redirect the damage to kill Linde's 1/1 Crypt Sliver. In the end all Linde could do was shrug and lament "I can't beat a Crown ..."