Round 5: The Muppet Show vs. Juice Bottle Gnome 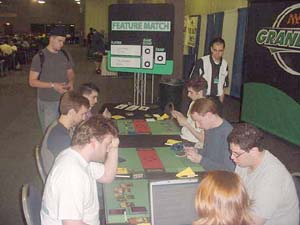 The Muppet Show (Mike Turian, Eugene Harvey, Jeff Cunningham) is notable for the sheer number of Pro Tour appearances and Top 8 performances among the members. The Juice Bottle Gnomes? Well, Mike Dove's only claim to fame was getting bashed with a Minute Maid juice bottle by the now-infamous Kurt Hahn. "I didn't know we were meeting a celebrity," Turian jokes. It's extra-funny coming from a man whose claim to fame is his association with a tuber, and who's sitting to the left of the National Champion.

Turian leads with swamps and plains, Starlight Invoker, and Embalmed Brawler (revealing Shepherd of Rot). Conrad's trying to keep up, with Goblin Sledder and Timberwatch Elf.

When Conrad attacks with his Krosan Vorine, Turian blocks with Daunting Defender. He's left with Starlight Invoker, which he swings back with, and plays another Embalmed Brawler, revealing two Zombies this time. He unmorphs a Fallen Cleric after he attacks a few more times, and Conrad's at six. He needs to find an answer soon to Turian's Clerics and Zombies.

Conrad seems rattled by Turian's icy demeanor. He's not being rude, just focused and completely at home within the context of the game. Turian has two creatures to Conrad's empty board, and after realizing that he's at two, quickly scoops his cards up.

Eugene's playing what appears to be a red/white deck, but there aren't any creatures in play at the middle table yet. Dove considers his moves, briefly pausing to watch Turian cast Cruel Revival to kill Conrad's Elf. He plays another morph creature and looks askance at Eugene's Sparksmith.

Dove seems frustrated with how the match is going on his end. He glances from side to side, while Eugene is completely focused on the game at hand. I'd expect no less from this seasoned Pro Tour veteran. Eugene has a ton of red creatures on his side; most notably Sparksmith, Goblin Taskmaster, and a white Wingbeat Warrior to round out his offense in the clouds. Eugene's Goblin army is too much for Dove, who succumbs quickly to Eugene's slick offense.

Bernat's played a Call to the Grave and is picking off morph creatures right and left. He unmorphs Skinthinner to kill Jeff's Gigapede, and from my vantage point, seems to have complete control of the game, unlike his teammates.

Next, Jeff is facing a completely empty board and an opposing Mistform Wall. Apparently, Bernat's Skinthinner has been Frozen Solid, and is now not a threat. Jeff quickly plays Covert Operative and that Gigapede again, but Bernat matches him creature for creature.

Jeff is looking at a completely empty board again, but is a perfect picture of serenity and calm. He's doing his best to come back against a pile of creatures, but it all ends soon for the stalwart Cunningham.

"Are you going to sideboard out Timberwatch Elf?" Turian asks jokingly. "He's very overrated." Turian leads with a swamp and some early creatures, but gets stuck at four land. Conrad's Sparksmith shoots Turian's Embalmed Brawler, but Turian saves it. He shakes his head as he cycles a Dirge of Dread. 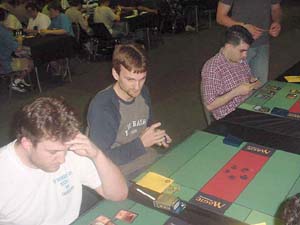 Now Conrad has a huge number of creatures (five) to Turian's lone Daru Sanctifier. Turian plays Daunting Defender, but I don't know if it will be enough to save him this time.

Turian's trying to rattle his opponent, and seems to be succeeding. "I know my team's ferocious compared to yours," he says, indicating his two clerics and Conrad's six attackers. Turian's doing his best to come back from a painfully slow start, and Dragon Shadow on that Daunting Defender may just do the trick. He attacks to put Conrad at four. Conrad's defense holds as Turian realizes that he doesn't have enough to hit back with, and concedes.

Dove is stuck on two plains and cycles a Swat to find some more land. Playing a swamp, he plays a morph creature, which Eugene Shocks. He keeps attacking Dove with his Deftblade Elite, but refrains from all possible banter while doing so. I don't think he's said two words to anyone not on his team during this entire match! Dove's first creature in play is Gangrenous Goliath, but Eugene is completely calm. Eugene attacks and provokes Dove's Death's-Head Buzzard, ending up on the better end of that trade in a hurry.

Dove and Eugene both stop for a second to watch Turian and Conrad figure out Conrad's huge combat step. Eugene tears himself away quickly, but Dove can't keep his eyes off of the other game. I wonder if Eugene is going to capitalize on the fact that his opponent's obviously distracted? He does his best, but runs out of options, and Dove gleefully takes a victory.

Bernat and Jeff are off to another slow start, with morph creatures trading again. Bernat has a Riptide Biologist in play to join his morph creature. Jeff gets off to a good start, though, as he's got both Hystrodon and Stonewood Invoker in play.

Jeff is facing an almost-empty board again, but decides to attack with his lone Hystrodon. After several rounds of combat, Bernat is again ahead on creatures, with two to Jeff's zero. He attacks to bring Jeff down to eight, and Jeff plays Hystrodon to stop the beatings.

Jeff plays an Aven Fateshaper, and ponders his options. However, Bernat soon follows with two more creatures, making the board look even more one-sided than before. Again, the players and spectators are all held briefly spellbound, as Jeff plays Chain of Vapor on Bernat's biggest creature.

Bernat's a bit addled by the spectators, but Jeff remains as calm as the rest of his teammates. He's made an amazing comeback, though, and now has enough creatures to start attacking back. With seven life, though, he can't afford to play around very much with his life total. When Bernat attacks with all of his creatures, Jeff considers his blocking options very carefully. Bernat opts to Read the Runes for two, and manages to hit Jeff for two. What was once a horribly one-sided game is quickly swinging back in the other direction. 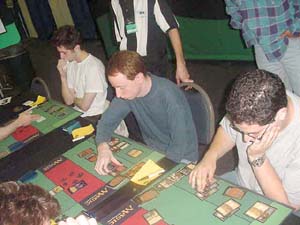 Jeff attacks with the Fateshaper, taking Bernat to six, then plays Covert Operative and a morph creature. Now in extra turns, Bernat and Jeff are considering every single option as meticulously as possible. I wish I'd been able to cover this matchup more, as this is turning out to be the pivotal game of the match. When Bernat attacks back with everything, he shrugs, like he has no other choice. Jeff blocks everything that Bernat can throw at him, and when Jeff can attack back for enough damage to kill him, Bernat concedes.

Conrad's first creature is Timberwatch Elf. Turian gets stuck with two lands, and discards Phage the Untouchable. "Sorry, Mike," Conrad says, trying to soften the sting of being manascrewed, but Turian waves off his sympathy. "It's all right."

Conrad plays out a Goblin Sledder and a Wirewood Savage, and Turian cannot seem to find another land. When Conrad plays a Crested Craghorn, things look incredibly bleak for the former Team Pro Tour champion. "Please give me a land, deck," he says, but finds Skinthinner instead. Conrad follows up with a Wave of Indifference and swings in for the win. "Good game," they say and shake hands civilly.

Eugene is in complete control now – I don't think that he expected to lose that second game. His Deftblade Elite and Flamestick Courier are spearheading an offense that Dove's lone creature cannot defend against. Dove kills the Elite with a Profane Prayers, but soon loses his only creature. "Where's the Twisted Abomination? Oh, it's in that deck!" Dove jokes, pointing at his teammate Bernat's deck.

Eugene attacks with Goblin Machinist, which Dove quickly Swats away. He doesn't have much life to play with, though, as Eugene demonstrates aptly why he's the National Champion.

Final Result: Jeff and Mike Bernat have no time left for a third game, and the match ends in a draw.