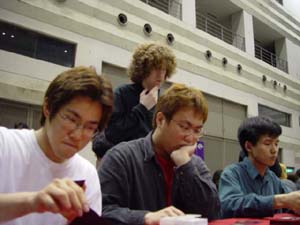 The hometown heroes Nagoyans are looking to paint the town red this weekned. Though fairly unsung, Ryo Ogura, Ryoma Shiozu and Koji Nose are equipped to do so. They've drawn stiff competition for this round, however. They face the mixed-bag that is N.G.O.K. It's the unlikely alliance between Master Thug Masayuki Higashino, Japan's Poster Boy Tsuyoshi Fujita, and Hanger-On Takayuki Nagaoka. They're looking to crush Nagoyan's dreams right here.

Ogura was looking strong early against Nagaoka, with a some early beats from Chatter and Wild Mongrel backed by Firebolt and Muscle Burst. Eventually Nagaoka hit five mana and brought out the fatties: Rabid Elephant and Balshan Griffin. Ogura was slow to get there, but it was worth it when he did: A truly terrifying Savage Firecat.

Higashino was teaching Nose the ways of red-black. Nose's blue-white crumbled under an assault from Crippling Fatigue, Faceless Butcher, Shade's Form and Pardic Collaborator. No creature he played was safe until it was far too late, each jumping in front of Higashino's super-siziing monstrositites. He quickly took the first game for N.G.O.K.

Shiozu couldn't believe his bad luck against Fujita. The board was pretty even, a couple of small creatures on either side, nothing to worry about, right? Unfortunately, Fujita turned over Stern Judge, and when Shiozu checked his hand he found it was missing one thing: Removal. Karma made for a short Game 1.

And just as that was wrapping up, Ogura's team of Werebear, Wild Mongrel and Firecat swung, and he pitched to hit threshold. The next attack would kill Nagaoka. He stared at the cards in his hand looking for a way around it, but there was no out. He scooped it up. 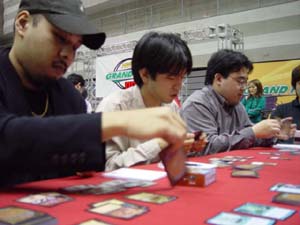 N.G.O.K.Shiozu was having trouble finding blue mana against Fujita in their second game. Fujita's Petravarks made sure he wouldn't be able to keep any of it. Shambling Swarm was contained by Fujita's Pilgrim of Virtue.

Nose's second game against Higashino was an even bigger beating, this time due to mana problems. Higashino stole Angelic Wall with Mesmeric Fiend, and Nose never got to more than three mana. The lack of defenders was sorely felt as a pair of Barbarian Outcasts took big bites of his life total. Firebolt finished him off.

Ogura did not have a monster start in the second game, managing just a Centaur Chieftain which was held at bay by Cartographer and Acorn Harvest. Nagaoka's Ivy Elemental for five got one-upped by a Gorilla Titan and an empty gravenard. Both had Rabid Elephants. The Titan hit once, but then Nagaoka had Moment's Peace, and so did Ogura. Thoughts of a quick win evaporated, and the board got cluttered in a hurry.

Fujita's Pilgrim of Virtue prevented his team from being wiped out by Screams of the Damned, and then drew into Aven Cloudchaser as a permanent solution. The damage had been done, though. In a bid to win he had to let himself fall to one life. He gave it back to Shiozu, who drew, and slammed down his sixth land, sending Morbid Hunger to the dome for the win.

While Ogura and Nagaoka tried to figure a way past the other's defences, Fujita and Shiozu were eager to get into the third game. Fujita started with Stern Judge, and removed Dirty Wererat with Sonic Seizure. Blazing Salvo took out Fledgling Imp. Shiozu was trying to hold back on swamps, but eventually had to play them out to Morbid Hunger the Judge.

Fujita had an army on board. Aven Cloudchaser, Mystic Familiar, Petravark and Chainflinger. Shiozu had lands and a freshly-drawn Crypt Creeper. In short order Fujita had given N.G.O.K. the win.

Incidentally, while Higashino and Fujita celebrated their victory, Nagaoka completed the sweep.