Round 5: Nick Eisel vs. Chris Benafel 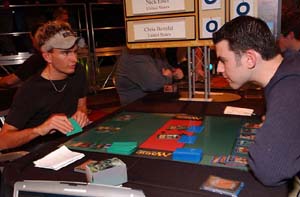 There's a lot of hype surrounding Nick Eisel. When you're the number one limited player on Magic Online people start to expect big things of you. Eisel hasn't disappointed. Top 8's at Grand Prix – Philadelphia and Grand Prix – Los Angeles have shown that he knows his way around Onslaught Rochester. His opponent is no slouch either. Chris Benafel has been around a long time, and when he wasn't cleaning house with ABU he was working his smooth styles for the camera. The old glory days are fading quickly, and his 4-0 performance so far is part of a bid to return to the spotlight.

After painstakingly sorting out a piece of paper and a pen for keeping track of life totals, Benafel was ready to begin.

He opened with Goblin Taskmaster, which Eisel answered with Festering Goblin. Benafel hit for two, and Eisel returned fire, finishing the Taskmaster off with Crown of Suspicion. Then they squared off morphs. Benafel cleared a path for his with Erratic Explosion (revealing Charging Slateback) but had no fourth land. Eisel made a Screeching Buzzard and handed it over.

Benafel dropped his second mountain and thought hard. He cycled a Mage's Guile during his mainphase, and played another facedown. Eisel untapped and started flicking through his cards. He turned his Buzzard sideways, then cycled Swat, finding a second swamp. He passed it back with three mana open and Festering Goblin ready to block. Naturally Benafel smashed in. The Goblin blocked the first facedown. It was Skirk Commando. Benafel replaced it with another facedown.

Eisel drew and started thinking. He held both Wirewood Savage and Barkhide Mauler, as well as Vitality Charm. He chose to drop the Savage and hold back. When Benafel charged, he blocked with both his guys. Benafel agreed to put damage on the stack. As active player, he got to make the first move. He unmorphed a Slateback, and Eisel Charmed to rescue his Savage. The dead morph was another Commando, and he lost Graxiplon from hand.

Now Eisel was rolling. Barkhide Mauler hit and kept him in action thanks to the Savage. Benafel swung and Eisel was happy to trade. Benafel cycled another Guile and made a Mistform Dreamer. Eisel drew from his Anurid Murkdiver and charged his Savage in. Benafel wasted no time in blocking. It meant he could play his Battering Craghorn face-up. Eisel was full of good stuff, though. Next he came down with Husk and Shepherd of Rot. Benafel's Essence Fracture pushed through three more damage, leaving Eisel at eleven. 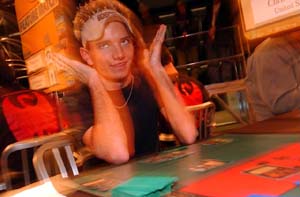 Eisel rebuilt with Husk and Buzzard. Still, Benafel was willing to swing in. He traded his Craghorn and a land for Eisel's Screeching Buzzard after a double-block. He had no follow up. Eisel untapped and dropped Prowling Pangolin. Benafel's next card was nothing special, and he scooped.

Both players kept their hands for Game 2. There was no action until Eisel's second turn. He played Shepherd of Rot, holding no more lands. Benafel of course had a morph, and Eisel's draw step was unkind. He cycled Swat in desperation, but found nothing.

He showed no remorse. He hit for two and added another facedown. Drew still not a land and readied his Festering Goblin and Vitality Charm. Unfortunately, one of the facedowns was Charging Slateback, and survived. Finally, Eisel drew his third land and got in with Nantuko Husk. Benafel hit for four and added a morph and Sledder. Eisel dropped Headhunter and Festering Goblin, hoping his defenses would hold. Benafel untapped and dropped Erratic Explosion, chuckling for all to hear.

Eisel thought hard, and chose to sacrifice his Headhunter. The first card flipped up was Mage's Guile. Then Benafel hit with facedown and Charging Slateback, apparently forgetting that the Husk was now a 4/4. Eisel took no damage and traded his Festering Goblin for the face-down creature and the Goblin Sledder. Eisel found his fourth land and made a Screeching Buzzard. Benafel attacked, trading his Slateback for the Husk in a double-block, and then played a facedown and another Sledder. 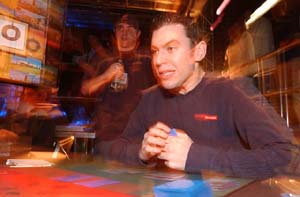 Eisel's next turn was the big one. A fifth land, and Aphetto Dredging for two Festering Goblins and Nantuko Husk! His one remaining land enabled the Goblin. He blunted Benafel's next attack, taking a point and killing the Sledder with the Husk's ability. Benafel played another morph. Eisel swung and played a pair of Husks. Essence Fracture let Benafel bring Eisel to nine. Eisel rebuilt with Festering Goblin and Barkhide Mauler, swinging the whole time in the air.

Benafel was immobilized. He made a Mistform Wall and held back. Eisel dropped the Husk and swung in with Buzzard and Mauler. Benafel tripled up, then unmorphed a Riptide Biologist after damage. He still lost a Commando. Eisel laid out the other Husk and turned it over. Benafel tried another facedown. Eisel went overtop, then busted Centaur Glade.

"Quick Chris! Offer him some packs!" – Noah Boeken, from the stands

Benafel had no play, while Eisel had an eighth land. All his creatures came in, and after Benafel erased his own board to stay alive, he was convinced to scoop.