Round 5: Noah Boeken vs. Mikey Pustilnik 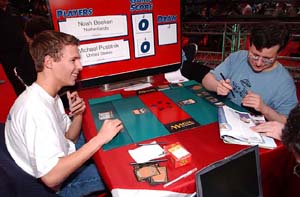 They were sitting right next to each other on the draft and now they get to play against each other. Former European Champion, and Team Masters' winner, Noah Boeken, one of the members of the ABU team faces of against one of the friendliest and nicest players in the Pro Tour.

Michael Pustilnik is such a nice guy that most people can only call him Mikey. Apart from being a nice guy he is also a terrific player. He is the only player so far to win a Pro Tour and a Masters. He won both events in Limited formats.

A win here would place one of them in the second day but a defeat won't mean the end.

Mikey's first play was a Filthy Cur that got some laughs from Noah Boeken. The Dutch traded it for Hydromorph Guardian that he got back with Gravedigger. The American followed the Cur with a Fiend stealing Patriarch's Desire, Chainflinger and Pardic Collaborator.

Mikey: "That is my best card."
Noah: "It doesn't get better than that."

Boeken didn't want to lose his Dusk Imp right awat so he Repelled the Chainflinger and sent his two creatures in. Pustilnik returned the damage before replaying the red shooter followed by a Barbarian Lunatic.

By then Boeken had already protected his Imp with a Ghostly Wings and dropped Ambassador Laquatus. The Lunatic got rid of the Dusk Imp and Mikey sent the Collaborator in bringing Boeken down to twelve.

The Dutch untapped and again sent his crew in crushing Mikey down to a precarious two life points before playing Aven Windreader. With the game winding down Pustilnik went for the throat sending everyone in. 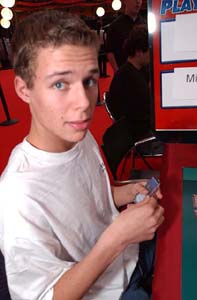 Laquatus and Windreader stepped in the way to stop the what seemed like the fatal blow but Pustilnik had the Rites of Initiation and enough extra cards to put the first game away.

The American came out fast with Barbarian Outcast and Mesmeric Fiend, taking the last spell in Boeken's hand: Fledging Imp. Still the Dutch already had Skywing Aven floating around so Mikey knew he had to throw damage spells at it to attack without retribution.

Engulfing Flames did that twice while Boeken slipped to twelve. On the third time the Aven brought along a mate: Cabal Torturer. While Boeken complained about his mana flood a Patriarch's Desire took out the Torturer.

Still the flood was now under control. The Aven stopped Mikey's midget army and Boeken played Chainer's Edict and Aven Fisher to keep things under control.

The Edict resolved for a second time and suddenly Pustilnik was hard pressed to keep ahead of the Dutch in the damage race. A Predict stole Pustilnik's Mountain right of the top much to Boeken's joy. 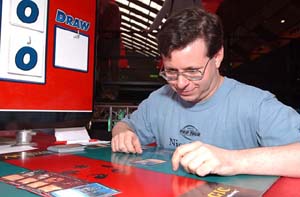 Noah: "You needed the Mountain, Right?"
Mikey: "Right. Damn you."

Still the American drew a second one, right of the top.

The American played Cabal Torturer and Whispering Shade and the game slowed down. The Shade was doing damage but with both players getting low on points each swing needed to be very carefully weighted and thought out before entering the Red Zone.

Boeken sent his whole crew in dropping Pustilnik to six before replaying Skywing Aven alongside Millikin. Torturer got the Aven out of the way and Mikey also sent his whole team in.

Millikin took one for the team but again Mikey Pustilnik had Rites of Initiation and enough cards to finish the game and the match.