Round 5: Nobuaki Shikata vs. Kazuyuki Momose 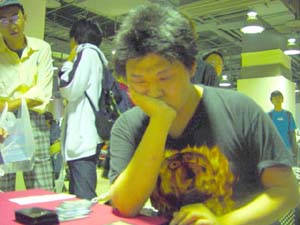 Usually, Kazuyuki Momose only comes out of hibernation to play in the Team Masters. He and teammates Reiji Andou and Itaru Ishida are the famed Panzer Hunters, who have made the finals of that prestigious event twice. Today, however, his long hiatus from singles competition seems to have come to an end. He is playing green-blue threshold. His opponent, Nobuaki Shikata, is less lettered, but still has a Top 8 at Grand Prix - Hiroshima to his credit. Shikata is running blue-green Quiet Speculation, similar in design to Kai Budde's Worlds deck.

Momose led with Nimble Mongoose. Shikata came back with a Careful Study that put Roar of the Wurm in the graveyard. Momose kept the pressure up with Wild Mongrel, and was matched. He hit for two and played a second Mongrel, waiting on Mental Note.

Shikata had a Note of his own, and it was a spicy one, dropping Wonder into the graveyard. He followed up with Quiet Speculation for two Roars and a Moment's Peace. Momose made a Rootwalla at end of turn, but his Note failed to turn up anything exciting. He was still miles away from threshold. He swung with his Mongrels and Rootwalla, trading the Rootwalla for Envelop and Careful Study. He threw down Werebear and passed it back.

Shikata stole whatever hope Momose had of outracing when he dropped a fourth land and Catalyst Stone. Momose drew a blank and watched the first wurm fly overhead for six. It was joined by two more. He drew another land, and when his desperation attack was blunted, he scooped it up. 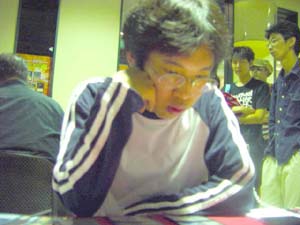 Momose stared at a one-island hand for Game 2. It held Careful Study and Basking Rootwalla, however, so he chose to keep. The Study hit no lands, and neither did his following draw. Meanwhile Shikata busted out Mental Note, again putting Wonder where it belongs, and Wild Mongrel. Momose found Centaur Garden, and used it to make a Werebear.

Shikata Studied, losing Grizzly Fate and Careful Study. His Mongrel hit and he passed it back. Now Momose was rolling. He powered out Mongrel and still had his island open to stop the Roar that Shikata Noted into. He untapped and brought out Mongrel and Mongoose, gearing up for the two Overruns in his hand.

Shikata pitched Roar of the Wurm and cast it. Momose prayed for land, instead getting Aether Burst. It seemed a suitable replacement until Shikata spent his next turn casting Grizzly Fate. He was, conveniently, at threshold. Momose drew a second Garden and Overran. His creatures crashed in. Shikata doubled-up bears on the Rootwalla and Mongoose. He fell to nine.

He untapped and was ready with his seventh land. Four more bears came to his aid. Momose drew Wild Mongrel. He stared at the board, looking for an answer. He chose to tap out to Overrun again, swinging with his Mongrels. Naturally, Shikata put three bears on one and his Mongrel and the other bear on the other. Two pitches later things were looking very bad for Momose. He pitched his last card, a Mongrel, to force out Shikata's last card. It was yet another Grizzly Fate.

Momose passed it back. Shikata made more bears and attacked. Momose counterattacked, and when Shikata showed how he would block, Momose conceded.