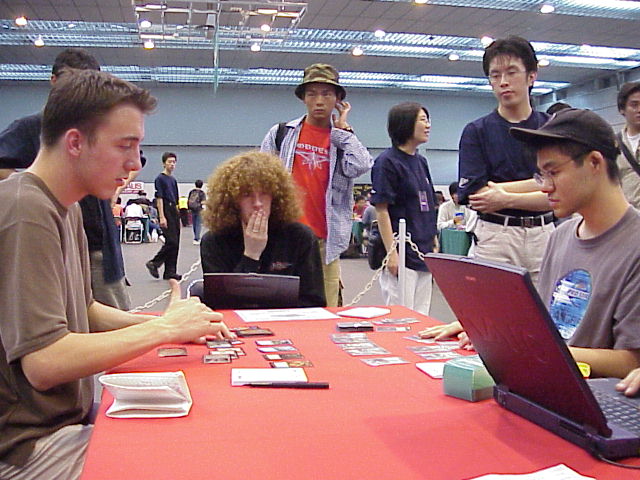 Olivier Ruel is fresh off an ill-fated run at the Magic Invitational, and has made the trip to Shizuoka in search of the one Pro Tour Point that will qualify him for the New Orleans Masters Series. After enjoying three byes, he won his fourth round needing only 2-2 to make Day 2, a good chance considering he's packing both Cabal Patriarch and Kamahl, Pit Fighter!

Standing in his way is four-time Pro Tour player Jinpei Hassaku. Hassaku is running a base-green beatdown deck that moves into white and black for removal and tricks.

With a flourish, Olivier Ruel won the die roll, choosing to draw first. He made a desperate gambit, choosing to keep a two-land hand. It did not pay off, as he mana-stalled on turn three. Hassaku, meanwhile, was not idle. He made a Springing Tiger and Krosan Archer before Ruel found four land to cast Treetop Sentinel.

Hassaku continued to whittle his life total, bolstering his creatures with Blessed Orator. Ruel hoped to stop the bleeding with Dreamwinder. Hassaku blew two sac-lands and ditched a card to his Archer to play Skeletal Scrying for three at end of turn. He untapped and dropped a reasonably-sized Gorilla Titan, disappointed that it had turned up only after he'd played the Scrying. 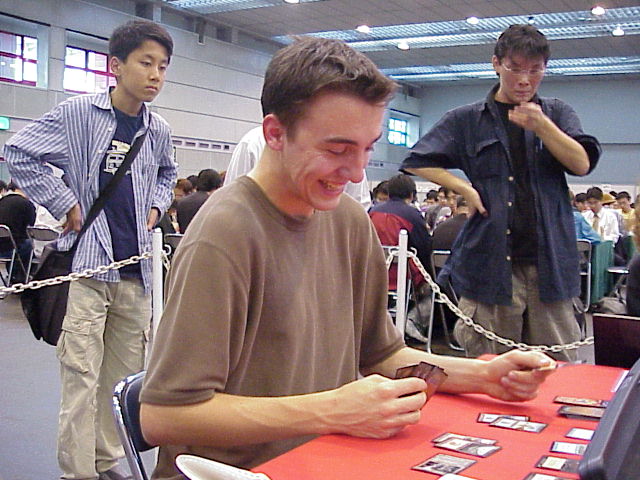 Ruel frantically poured Dusk Imp and Millikin onto the table, trying to force a creature stall. Hassaku was happy to oblige, dropping Hallowed Healer and threatening to run away with the game. Ruel was ready with Ghastly Demise and Dreamwinder number two.

A timely Cease-Fire from Hassaku prevented Kamahl from showing up for a turn, giving him time to make a Rabid Elephant. Ruel was all too happy to match it with the Pit Fighter. His celebrations continued into Hassaku's turn, but were cut short by Patriarch's Desire. The board stalled, as each matched the other's plays, but Hassaku was nearing threshold. Hassaku attacked with Springing Tiger and Gorilla Titan.

Ruel would love to forget what happened next. He pushed both his Dreamwinders in front of the Tiger. As expected, Hassaku ditched a card to the Archer, and, now at threshold, blew his Centaur Garden to make his Tiger an 8/9. Ruel tried to correct him to 8/8, but Hassaku just gestured to his Blessed Orator. Ruel gaped.

With both his best defenders thrown away, Ruel's position slid from bad to game over in a matter of turns.

Ruel took a mulligan in game two after choosing to draw. He met Hassaku's twice-used Chatter of the Squirrel with Minotaur Explorer, losing Dreamwinder, unfortunately the best card in his hand. He continued to build his mana with Millikin. Hassaku answered with Hallowed Healer. Ruel was forced to blow up a land to make a Treetop Sentinel.

Hassaku made no play and held back. Ruel sent his Explorer headlong into an Elephant Ambush, the token surviving thanks to the Healer. 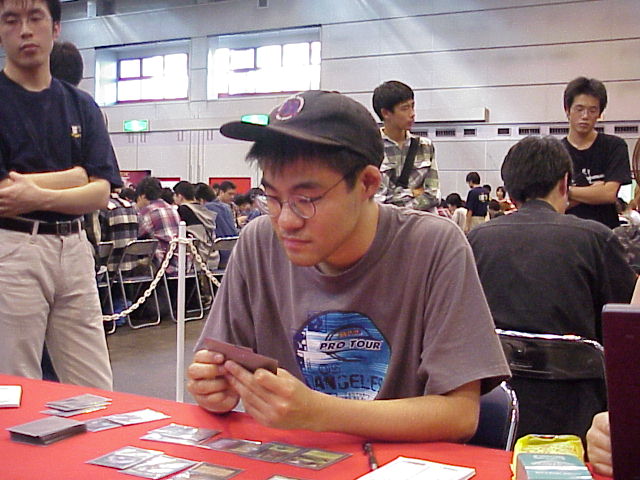 Now Ruel was committed to winning in the air. He added Childhood Horror, now at threshold, and started swinging. Ghastly Demise on his Sentinel took him out of the driver's seat. Spiritualize bought Hassaku even more time. Soon, Hassaku was at threshold, and Ruel couldn't do damage with his flyer.

While Hassaku made a Rabid Elephant, he made nothing more threatening than Dusk Imp. The game ended shortly thereafter.