Round 5: Ordeal or No Deal?

ather around everyone, and let me tell you a tale. A tale of a Platinum Pro who stuck to his guns against all odds and won a Pro Tour with four copies of Judge's Familiar in his deck. A man so devoted to white, that he activates Heliod all on his own. A man so dedicated to attacking with small white creatures that he's on his own personal Crusade. A man so successful with similar – or outright the same – styles of deck, that he's become synonymous with the archetype.

Let me tell you a tale of Craig Wescoe.

Craig Wescoe is a 31-year old with a startlingly accomplished resume. He has three Pro Tour Top 8s to his name, including a Block Constructed win from Pro Tour Dragon's Maze last year. He has as many Grand Prix Top 8s, but, more important to this weekend, he also has the highest win percentage in Block Constructed of anyone here this weekend at a whopping 70.9 percent. He has, oddly enough, never Top 8'd a Pro Tour outside of California, however, as all of his best work has been done out west.

He's also just a swell guy. Nice, soft spoken, friendly to all of his opponents. Even the ones crushed under the heels of his unrelenting white horde. He's a man in his element, armed with Brimaz and his bros, ready to take down a tournament by attacking, attacking, and attacking some more.

Coincidentally, his opponent this round, Kelvin Chew, had put in some good work on the West Coast himself. The Singapore native's only Pro Tour Top 8 came in Seattle at Pro Tour Return to Ravnica, and he also can claim a fifth place 2011 Worlds team finish.

Chew also knows his way around an attack step, claiming that Pro Tour Top 8 on the back of Modern Infect. But he had opted for a starkly different approach this weekend, one that, color aside, couldn't have put him further from the Wescoe school of Magic. 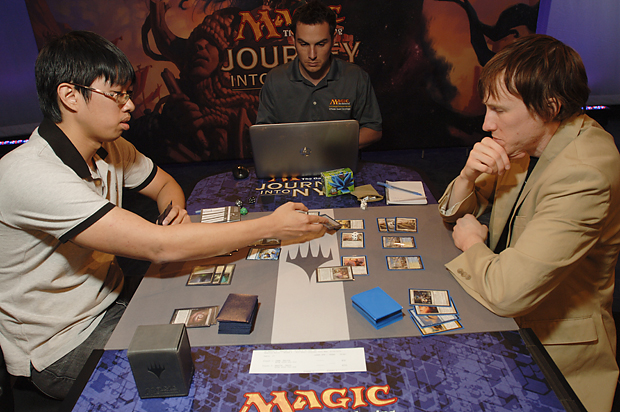 Both Kelvin Chew and Craig Wescoe have some huge accomplishments in the past two seasons.

Let's get the easy part out of the way. Wescoe's choice for the Pro Tour revealed no real surprises, as the format has several variations on a viable white attacking strategy. The only drama, I suppose, would be what color he would pair with his Heroic squad. He ended up in blue, largely for Battlewise Hoplite, Aqueous Form, Ordeal of Thassa, Swan Song, and a touch of Stratus Walk.

Wescoe. White. Heroic. Got it?

Chew's choice for the weekend, on the other hand, is a grindy white-black-green list aimed at taking advantage of Eidolon of Blossoms and beating up on exactly the kind of aggressive decks Wescoe brought to bear. Testing with TeamMTG Mint Card, Chew and crew came to the conclusion that the field would be aggro-heavy and sleeved up 75 cards they thought could tackle such a metagame.

On the surface, it looked like Chew had a clear advantage. But, out here in the real world, where people actually play the game, you really can't count out Craig Wescoe when he's attacking with small white creatures.

True to form, Wescoe led with a weenie, dropping Hero of Iroas like it was hot before his hand was hit by Thoughtseize and his lone attacker was Banishing Light.

Wescoe reloaded with a Favored Hoplite, equipping it for an Ordeal of Heliod to start his attack and, one turn later, gain 10 life. He paused briefly to Swan Song away a Thoughtseize in order to protect his hand, but he had his heroic engine started.

Chew was working on an engine of his own. Eidolon of Blossoms started kicking up the cards as Chew dug for ways to answer Favored Hoplite. Brain Maggot didn't provide much disruption, but it did effectively cycle with Eidolon in play, clearing the way for Banishing Light on the Hoplite to push Chew even further ahead. 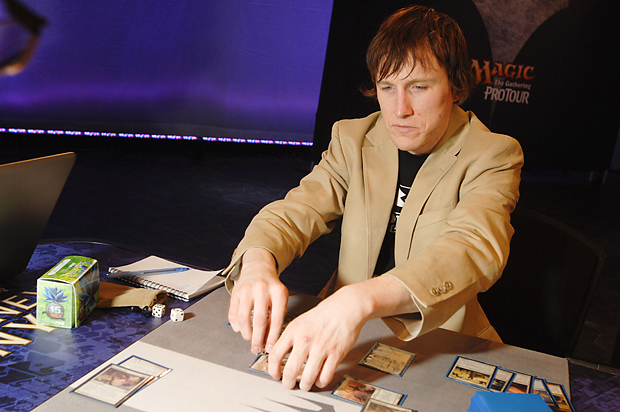 Wescoe, to the surprise of nobody, is attacking with white creatures at this Pro Tour.

So, to clarify, at this point Wescoe had no cards in hand and a simple 3/3 Hero of Iroas. Chew, meanwhile, had a decent sized grip and an Eidolon of Blossoms.

In the world of Theros, a Hero needs some help before he can take on the denizens of the Gods, and Wescoe had none to be found. Hero's Downfall, appropriately, ended the Hero of Iroas and cleared the way for Chew.

Chew's crew was a bit motley, so it took a few turns to beat down, but his Eidolon kept the removal coming and kept Wescoe's board clear. A few Hero's Downfall later and Chew had completely dismantled Wescoe on the way to a first-game win.

Wescoe got a very Wescoe-esque start in Game 2, curving Favored Hoplite into Battlewise Hoplite, but lost his only trick to a Thoughtseize on Chew's second turn.

But in a deck full of tricks, he didn't have to wait long to find another, pushing his Battlewise Hoplite into an Ordeal of Thassa, dropping Chew all the way to 12 before he even hit a third land. The fact that many of the Singaporean's lands came into play tapped didn't help much either. 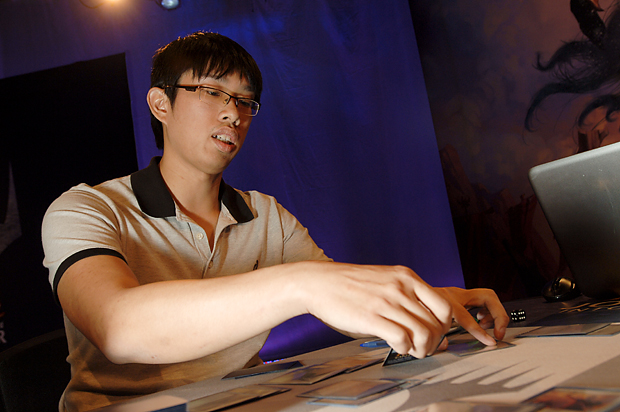 Chew's Junk Constellation deck is able to keep the cards flowing thanks to the powerhouse Eidolon of Blossoms.

Fortunately for him, he found an untapped land to go with his Hero's Downfall, cutting Wescoe's quest to finish the Ordeal short by a turn. That gave Chew a slight reprieve and let him reload with Eidolon of Blossoms. At least for one turn.

The reprieve was incredibly short lived, as Ajani's Presence boosted Wescoe's team and took down the Constellation all-star as well. Chew dropped to 6 life and then 2. A Hero's Downfall and a chump block bought Chew a turn, and a second Downfall let him drop to just 1 life while facing a single Favored Hoplite.

1 life, no tricks, no problem.

Silence the Believers shut up the Hoplite. That, in turn, bought Chew enough time to draw Elspeth, Sun's Champion. The believers were silenced, and so was Wescoe's attack step.

And, just like that, Chew was up three 1/1s to Wescoe's lone 2/2 Battlewise Hoplite. It wasn't as secure of a position as it looked, given the presence of Aqueous Form and Stratus Walk in Wescoe's deck.

But Chew started his engine in earnest with two Eidolon of Blossoms, now that he was free from worrying about blocking. A few more turns of drawing, one Elspeth ultimate later and Chew had escaped by the skin of his teeth—all while fading several potential winning draws from Wescoe.

"I needed some lucky top-decks, like that Elspeth," Chew said. "I even sided out one Elspeth, so I only had two."

It was lucky indeed, but Chew had a very specific game plan against the Heroic decks and seemed well versed in the match.

"You need to make sure you discard their Gods Willing and Swan Song," he explained, reasoning that those were the two spells that beat his removal and blockers. For that very reason he kept Thoughtseize in after sideboarding where many, seeing an aggressive match-up, might have sided them out. Chew's team's testing, however, had revealed that both Thoughtseize and Brain Maggots were key to dodging the one-mana protection spells. From there, their removal and superior power would take over as the Heroic deck's synergy fell apart.

With that win, Kelvin Chew moves to 4-1 while Craig Wescoe, champion of the last Block Constructed Pro Tour, falls all the way to 3-2.

3 Reaper of the Wilds 4 Fleecemane Lion