Round 5: Oyvind Odegaard vs. Roc Herms 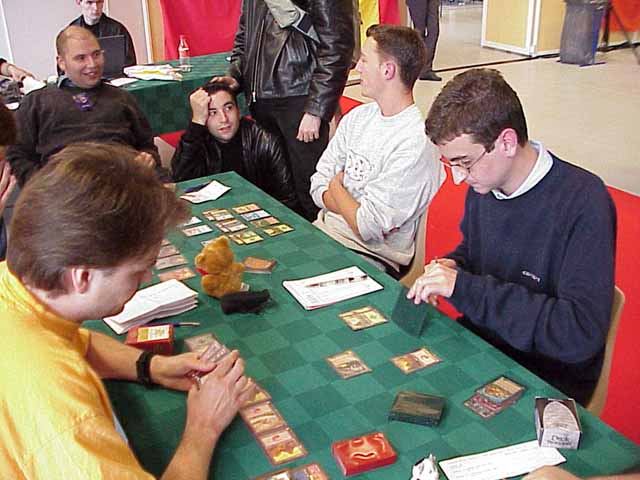 Someone from Norway has won this event in each of its two previous occurrences. One of the Norwegian players thought to have a chance this year is Øyvind Ødegaard. Ødegaard has been on tour 3 times and has finished in the money at 5 Grand Prixs. He also lists as his most impressive tournament accomplishment his two runner-up finishes in the Oslo Invitational - the most prestigious tournament in Norway. His opponent in round 5 was Spanish nationals runner-up Roc Herms. Herms is best known for finishing 9th at Pro Tour London and he has quietly become the European player with the 6th highest composite rating.

Herms played out an early Spore Frog, Rib Cage Spider, and Seal of Strength and then decided to stop casting creatures so he could set Ødegaard up for Rupture. Ødegaard suspected something was up when Herms had plenty of land and plenty of cards in hand, but wasn't casting any spells so he was careful not to over commit. When Herms finally cast the Rupture he got only a 4 for 3 trade because the Belbe's Percher that he thought would go away didn't (because it flies).

Herms followed up his Rupture with a Laccolith Grunt. Now that herms was tapped out, Ødegaard saw his chance and cast Rhystic Syphon, giving him a huge edge on life. Herms played Jolreal, Empress of Beasts, but he was on 3 life. Jolreal would allow him to win if he could top deck a land, but Ødegaard used Steal Strength to finish him off a turn earlier. Herms was pretty upset to lose a game that he probably should have won. He died with both Silverglade Elemental and Thresher Beast in his hand because he took too much damage while trying to set up Rupture and then that Rhystic Syphon threw off all his calculations.

Game 2 showed off more of the direct damage potential of Ødegaard's deck. He cast Blood Oath on turn 4, naming creatures. Herms only had 2 so he "only" took 6 damage, but Ødegaard got to see that Herms had Rupture in his hand yet again. Ødegaard traded his Chimeric Idol for Herms' Keldon Berserker and then used Sever Soul to remove Thresher Beast and give him even more life. Ødegaard played out Ally Grifters and Flowstone Wall while Herms put Treetop Bracers on his Giant Caterpillar. Ødegaard then played Ancient Hydra and shot Herms' only creature other than that caterpillar (a Spore Frog). This move essentially forced Herms to Rupture away the Caterpillar, dealing 4 damage to both players. Ødegaard had just a Mogg Toady in his hand but his Wall survived the Rupture so he figured the Toady had a decent shot at doing the last 2 points of damage. Herms had no creatures left after the Rupture and Ødegaard then drew Lesser Gargadon off the top of his deck to win going away. Ødegaard dealt only 4 points of creature damage in game 2, but that was all he needed.