Round 5: Pete Norris vs. Johnny Chapman 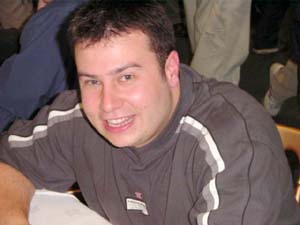 Both players sat down and began the match with friendly banter, with Pete taking the opportunity to point out to Johnny the difference between heads and tails so they could determine who would play first.

Both players chose to keep their hands and Pete was the first to unleash a spell when he played a second turn Galina's Knight. Johnny was quite pleased when he guessed what Pete was playing. He claimed that he crushes that particular archetype and set off by using Vindicate on the Knight.

As both their decks started producing threats the battle swung back and forth with haste monsters being played from both players, including Skizzik from Johnny and Lightning Angel from Pete. Removal spells were also flowing freely with Pete using Prophetic Bolt on the Skizzik and then eventually using one directly at Johnny, winning him the first game of the match.

Johnny appeared to be nervous in the feature match spotlight, making mistakes such as shuffling his deck before sideboarding and letting Pete's trash talking influence him. Johnny was quick to point out that his draw hadn't included any 'bears' and didn't think that the game result would be repeated.

Sideboarding included 2 Crimson Acolyte, Captain's Maneuver and Jilt from Pete and 2 Flametongue Kavu and 2 Manacles of Decay from Johnny.

Johnny chose to play first and thought for a long time about whether he should keep his hand or not, looking up to the sky and mentally doing the math. He finally decided to keep, as did Pete. Pete laughed as his first plays were three Shivan Reefs and Island while Johnny was already attacking with Spectral Lynx. Vindicate forced Pete into an even more painful situation by removing his Island. Pete finally decided to get rid of the cat by blocking it with a Galina's Knight, using Urza's Rage to force a second regeneration and then on his turn killing it with Prophetic Bolt. Johnny exclaimed at the amount of effort it took to get rid of his Lynx, but had more monsters in reserve and started attacking with them too, significantly Shivan Zombie. 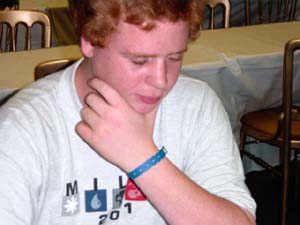 Again the game went into a period of creatures being played and quickly removed by cheap removal but Pete could not get rid of the Shivan Zombie no matter how hard he tried. Pete had another Lightning Angel but both players knew that by itself it wasn't going to be enough to stop the protection from white Zombie.

Pete made a final effort to block Johnny's army of creatures but simply shrugged after tapping out and having a Death Grasp directed at his head.

Pete sighed as he mulliganed his one land had and groaned again when Johnny made an early Shivan Zombie. Pete tried to race with one of his Lightning Angels but Johnny ripped a Flametongue Kavu off the top of his deck, turned to the spectators to show then and then apologized to Pete for his 'savage topdecking'.

All Pete could do to attempt to stem the bleeding was make a Goblin Trenches. By this point Johnny had gotten him low enough on life that when he tapped out to make goblin tokens Johnny burned him out of the game with an Urza's Rage without fear of it being Absorbed.