Round 5: Phoenix Foundation vs. Burkas 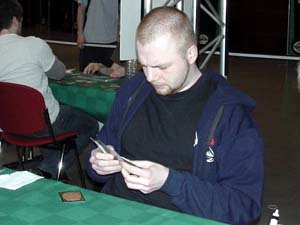 probably won't get any better than this for round 5, when 1141 Lifetime Pro Tour Points show up at the feature match area. Phoenix Foundation needs no further introduction, so we'll advance straight ahead to Burkas. Burkas are Nicolai Herzog, Tuomo Nieminen and Anton Jonsson, the star-packed team from Scandinavia that are more than able to stop Marco, Kai and Dirk now and here before things will get out of hand again…
Both teams are 4-0.

We sat down at Marco's and Nicolai's table to watch a match that would be short but sweet.

Marco Blume - Nicolai Herzog: Marco won the toss and chose to play. Both players keep their hands and Marco started off with a Viridian Longbow, a Vedalken Engineer, a Silver Myr and an Aether Spellbomb, missing a turn two landrop.
Nicolai faked a mono-black deck by playing three swamps and a Sword of Light and Shadow. Marco found a third land and played Spectre's Shroud. The Engineer was the lucky man to get equipped and Marco attacked for 3. Nicolai discarded a Vulshok Battlegear.

Nicolai played a mountain, summoned a Grimclaw Bats and equipped the Sword to it.
Herr Blume went nuts in his next turn; he played Sombre Hoverguard, bounced the Bats and attacked for another 3, kicking a Darksteel Gargoyle out of Nicolai's hand. The Bats got themselves replayed and equipped again on Nico's next turn, leaving 1 swamp open. Marco just played a Cobalt Golem and equipped the Hoverguard with the Longbow.

Nicolai thought that attacking with the bats would be a good idea. Marco blocked the potentially large Bats with the Hoverguard and Nicolai pumped once with damage on the stack. When the Longbow got activated on the Bats, another black mana went into the Bats; The Bats survived and Nicolai went down to 12. Moriok Scavenger entered play and retrieved the Gargoyle to end up Nicolai's turn.

Marco was surely out of gas, because all he could do was to pass the Longbow to the Silver Myr and pass the turn to Nicolai. Bats tried to take a piece of Marco, but Cobalt Golem got activated and chumped the evil flier. When Nicolai tried to Consume Spirit the little Myr with the long Bow, the Myr shot himself to avoid Nicolai from taking life. In Marco's next drawstep he scooped when another land was turned.

"Hey Anton… Sword of Light and Shadow just won me Game 1. I was just a participant, though…", Nicolai Herzog.

Marco chose to play first and both players were satisfied about their hand.
The big man played a Necrogen Spellbomb and a Vedalken Engineer on his first two turns and Nicolai responded with a Gold Myr. Marco had a nice play for turn 3; Myr Matrix. Nicolai had to read the card and asked Marco if he had ever played that spell before in his life. The answer was "no". Obvious…
Nicolai was in a tight spot immediately, but didn't hand over the game just yet; and why would he? He got himself a 2/2 Gold Myr thanks to the Matrix ! ! !

Drill-Skimmer was the answer for Nicolai and Marco just played a land to prepare the making of the Myr-plan. And after Nicolai ordered the attack to the Drill-Skimmer and had built an Arcbound Bruiser, the first Myr Token entered play.
Marco made a Sombre Hoverguard and had enough artifacts to be sure another Myr-token would be built at Nicolai's end of turn. Before that would occur though, Nico made another Drill-Skimmer and an unimpressive 0/4 Wall.
Marco attacked with his Hoverguard on his next turn and one of the Drill-Skimmers took him out of service. In his second mainphase, Marco made a brand new Myr-Token, bringing the Grand Total to 4 and tapped two Islands to bring TWO Quicksilver Behemoths into the battlezone. Those babies were on discount….

Nico had 6 mana to play the Sword for the first time in game 2 and chose the Bruiser to equip. Marco smiled when Nicolai chose not to attack and send in his team; both the Behemoths and the 4 Myr Tokens tried to cause serious damage to the Viking and 8 damage actually came through. The wall blocked 1 token and the 5/5 Bruiser stopped one of the Quicksilver Behemoth for the rest of the game.

Marco got Nicolai to 12 in his first attack, but was kinda low on life himself, because Nicolai had beaten him occasionally with Drill-Skimmers. So after doing 8 to Nico, he only played a Tel-Jilad Archers and some lands over the next two turns, also because Nicolai finally played his Darksteel Gargoyle and a Clockwork Vorrac.

More lands were dropped and Nicolai made Sundroplet, but every turn Marco's army grew bigger, while the only thing growing on Nicolai's side was the Vorrac. Things were looking grim when Marco had Carry Away for Nicolai's Sword and played Neurok Spy to give the Sword to. The only thing the Scandinative could do was set himself up for game 3.

Game 3: Game 3 would not be played in the same fashion as the prior games; both Dirk and Kai won their matches against Tuomo and Anton, so Nicolai and Dirk made their match into some sort of decktest session. 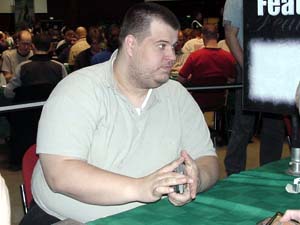 Some nice plays were still made; Marco made a turn 3 Quicksilver Behemoth and Nicolai Chittered Rats Marco on turn 4. Carry Away stole a Vulshok Battlegear from Nicolai, so Sword of Light and Shadow was set on Recurring Rats Mode, but Marco thwarted that plan and destroyed the Sword. Nicolai tried Screams from Within on an equipped Myr and when the Myr got unequipped, it died on the spot. Last lesson we learned was that Screams on a Behemoth gets rid of the Screams, but that's always better than to put it on one of your own creatures. Still, Nicolai won the playtest match.