Round 5: Pierre Malherbaud vs. Noah Boeken 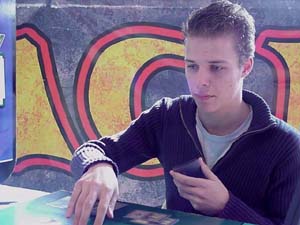 Malherbaud was forced to mulligan going first and Boeken began beats with Filthy Cur and then Fledgling Imp.

Malherbaud's first play was to steal a Swamp off Boeken with a Petravark. The Dutch player had another and added Patchwork Gnomes to his offence. This turned out to be a good target for Afflict and the Petravark took down the Filthy Cur.

Malherbaud regained some of the card advantage lost by mulliganing with Breakthrough. Too late though as Boeken enchanted a swampwalking Krosan Constrictor with Seton's Desire and gave Fledgling Imp flying to bypass a Pitchstone Wall.

Boeken managed another quick start as a Basking Rootwalla appeared on turn 1 and started hitting for three. It only managed two hits before a Psionic Gift on a Patchwork Gnomes pinged it off the board.

Then the big guys came out to play – a Mindslicer on Boeken's side and a threatening Sengir Vampire on Malherbaud's side.

Boeken ran the Mindslicer into the Patchwork Gnomes, happy to trade it and a hand full of land for Malherbaud's hand. It turned out to be a reasonable trade as Malherbaud lost Grotesque Hybrid and Ghastly Demise.

Boeken couldn't top-deck an answer to the Vampire though and it ended the game pretty quickly. 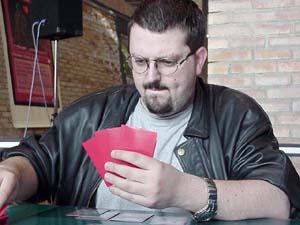 Boeken made Malherbaud go first but this didn't really pay off as he was the one who had to mulligan. Boeken's beatdown curve was matched by Malherbaud's removal. Firebolt killed Filthy Cur, Afflict killed Patchwork Gnomes and Ghastly Demise killed Krosan Constrictor.

Malherbaud stumbled on land and then his Petravark was killed with Crippling Fatigue. Then both players summoned creatures that stuck – Spinging Tiger from Boeken, Groteque Hybrid from Malherbaud.

Boeken found one of the two islands in his deck and enchanted his Tiger with Psionic Gift, forcing Malherbaud to discard his to the Hybrid so a Crippling Fatigue wouldn't finish it off.

Mindslicer appeared on Boeken's side and he gained a temporary upper hand even though Malherbaud used Waste Away to kill the Tiger. A Soul Scourge flew in to leave the Frenchman's dwindling life total under pressure. A Flame Burst took care of that problem and he summoned a Chainflinger to take a narrow lead in the damage race.

Boeken attacked with the Mindslicer to make it nine life to six life. It left him with a difficult decision on whether to pay three life to flashback the Fatigue. He did but crucially also had a Basking Rootwalla to threaten lethal damage in his next turn.

The reasoning became horribly clear when he waited for Boeken to draw a card then killed the Mindslicer with Waste Away. This left both players with no cards, no creatures and six life apiece.

Malherbaud proved better as the top of his library sent a Pardic Firecat to zip in. A second attack and then a Firebolt from the graveyard gave the game and match to the Frenchman.