Raphael is well-known internationally, especially for his two Pro Tour Top 8s, one at Chicago 1999, and one at Worlds 1998. Gilles is les known, but he has some good performances in Grand Prix this year, and he used to be a highly-rated chess player before concentrating on Magic. They were both on 4-0, so this match was already a very important one for the final standings. 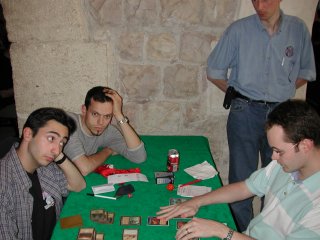 Gilles started but was unable to play anything on his first three turns, while Raphael played a Nomadic Elf on his second turn and started to attack with it. Blery drew a Mountain on his fifth turn, which allowed him to cast a Kavu Runner. Levy didn't have a Mountain but he could use his Nomadic Elf to produce the red mana necessary for Flametongue Kavu, once again clearing Gilles' side of the board.

Gilles used Addle to get rid of Sabertooth Nishoba, but it also revealed that Raphael had Explosive Growth, Wax/Wane, and Stone Kavu in his hand. Blery summoned a Kavu Recluse, and blocked the Flametongue with it, since Raphael only had five lands in play he hoped that Levy would be unable to keep it alive and play the Kavu, but Raphael did have the sixth land.

Gilles had to sacrifice two lands for a Magma Burst to kill the Flametongue and the Stone Kavu, but Raphael was far from out of creatures. The Nomadic Elf brought Gilles to ten, then Raphael played a Glimmering Angel. Gilles tapped out for Firescreamer, and as Raphael had drawn a Canopy Surge, he used Explosive Growth on the Angel to put Blery on three.

Gilles didn't draw anything that could help (Soul Burn?), and Raphael Surged for the first game.

Blery Addled on the second turn this game, the only White card in Raphael's hand was Sabertooth Nishoba, but he also had Nomadic Elf, Aggressive Urge, and Flametongue Kavu. Nevertheless, Raphael didn't have a Red mana source, so Gilles decided to play Mire Kavu, although Raphael did have a Nomadic Elf.

Levy immediately drew and played Fertile Ground, threatening to use the Kavu next turn. Gilles played a Lava Zombie gating the Mire Kavu without attacking. Perhaps the Mire Kavu was the only Red or Black creature in his hand so he didn't want to trade it for the Elf and the Aggressive Urge.

The Flametongue Kavu came down anyway, and removed Lava Zombie. Gilles played a Firescreamer that traded with Nomadic Elf - Raphael chose to hold back with his Kavu - and then Raphael summoned a Sulam Djinn. Blery had no choice but to play Red creatures, even though this meant making the Djinn large, and he knew that his position was hopeless as Raphael still had an Aggressive Urge in his hand.

Blery blocked the Kavu with his Shivan Zombie, but it was only a token gesture, Raphael of course used the Urge, and the Djinn brought Gilles down to ten. Blery drew a hapless Morgue Toad, and Raphael attacked again. This time Gilles blocked both creatures, but Levy had an Explosive Growth, and used it to allow the Sulam Djinn to Trample over for the win.