Antoine Ruel sat down for his feature match with a Sway the Stars deck and ridiculous pink hat. Despite solid performances by both Antoine and Olivier Ruel, the supersquad members were unaware of precisely what deck Antoine was playing. They could not help but take notice of his headgear, though. Gabe Walls leaned over and teased, "Nice hat, Frenchie." 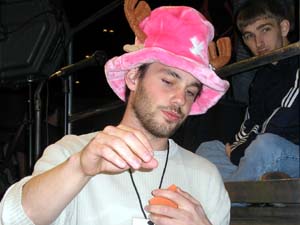 Antoine turned his attention to Richie and the two players bantered about their tournament so far and the new Player's Club announcement. "What level are you?" asked Hoaen.

"Four." At level four, Antoine is qualified for every event through next season's World Championships and gets a $1,000 appearance fee for every Pro Tour he decides to attend with one free airfare to boot.

"Level three," grumbled Hoaen who is also now qualified for every event through Worlds 2006 but he will only receive $500 per event in appearance fees and no airfare -- unless he managed a Top 16 finish this weekend, which is something many of his supersquad teammates think he is in an excellent position to do. According to Osyp and many other team members, there was no other member of the squad who playtested this format as thoroughly as Rich.

Rich's deck was the same white/green/blue control deck that many of the supersquad players were piloting. At 3-1 he was having more success than many of his playtest partners, who seemed to be pooling one bracket down in the standings, smack dab in the land of two-loss bubble matches.

When Antoine opened the game with Forest and then Plains, it drew a raised eyebrow from Rich, still in the dark about what deck his opponent was playing. "Did Levy leak our deck to you?"

Ruel cast Time of Need and began looking for the card he wanted. Rich tried to glean information, "North Tree?"

Richie had mulliganed but managed to parlay a Sustainer and Kodama's Reach into his five mana by turn three. He untapped into Yosei, the Morning Star for the fourth turn. While Richie did not know for sure what he was up against, Antoine was in no such situation. He untapped post-dragon and played Cranial Extraction, naming Hokori Dust Drinker. Rich was holding that along with Meloku and Time of Need.

Antoine took six on the next turn but was sitting on Final Judgment. One of the major control elements of Hoaen's deck was the ability to tap up to 10 permanents and shut off two untap steps with a pair of white dragons. He tutored up the second copy with Time of Need, although it was just going to be a replacement dragon. He knew his first dragon was marked for death and asked, "Wrath?" as Antoine began his turn. He obliged.

The next threat out of the Canadian player was Meloku, which Antoine sought to mitigate with Patron of the Kitsune. Rich smiled and played his own Patron.

Antoine was crestfallen as Rich had drawn the legend somewhere in the last two turns. "No, no…nice draw."

The parade of legends continued with Myojin of Cleansing Fire on the French side and Yosei on the other. Meloku joined the mix for Antoine. Umezawa's Jitte threatened to swing the game in Rich's favor but Antoine was able to Time of Need for his own Dragon and banish the original. Antoine made a couple of tokens in response to his lands getting tapped and both players were tapped down for a turn.

Richie reset the board with Final Judgment.

"Wow," the only response Antoine had to Kodama of the North Tree, although he did crack a pair of Sakura-Tribe Elders end-of-turn. Final Judgment took care of Kodama. Richie was not out of gas yet and he played another Yosei along with a Tribe Elder. That was okay with Antoine, he had another Final Judgment.

Richie still had his Jitte looming if he could ever get a creature to stick around long enough to attack. An Orochi Sustainer was up for the challenge but this time Antoine had Splinter to take out all of Umezawa's weaponry. Somehow Richie still had gas. Time of Need found Meloku and Antoine checked on how many outs he had remaining. He cast Kodama's Reach and passed the turn. Richie was able to get him to two. Antoine pleaded with his deck and peeled back his top card as he drew it…

Richie still had no idea what Antoine was playing. "What do you want to draw here? Another Myojin?"

Sensei's Divining Top gave Antoine hope. Heartbeat of Spring was first and then he played and activated the Top. He revealed the cards off the top of his deck one by one - if there were no Sway, he would lose. Sway was two cards down.

Both players shuffled furiously and thoroughly - you don't get to mulligan off of a Sway hand. There are only so many aspects of the game that practicing online can help you prepare for. Shuffling is not one of them, and Richie was exasperated as he worked his cards and hoped for the best. "This is so much better on Modo. Do you ever just burn at this point?"

Antoine said that it could happen but he had floated enough mana under the ersatz Upheaval that he was able to cast Time of Need for Kodama of the North Tree and put it into play along with a Tribe-Elder. Richie scooped.

Richie was skeptical that Sway the Stars was a viable deck in this format. He squinted at Antoine and grilled him on his matchups, "So that deck can't beat White Weenie ever, right?"

"That is the best matchup. We want to play against that every round," Antoine smiled and nodded at the TOGIT deck that Rich was shuffling. "This is a good matchup too."

While Richie felt his deck could go toe-to-toe with White Weenie, he did not find it to be close to "the best matchup."

"Our decks are really similar which is why I am wondering why we have such different results," wondered Rich.

They announced the result of Kai's feature match. He had advanced to 5-0. Antoine mock-gnashed his teeth and cursed the German's good fortune at having been the beneficiary of a free win last round, "Bah! A bye!"

Rich came out with early plays of Divining Top and Sakura-Tribe Elder. Antoine's first play was to counter Rich's Kodama's Reach with Hisoka's Defiance and play his own on the next turn, which left him tapped out. Rich made sure he stayed that way with Hokori Dust Drinker.

Rich had little in the way of pressure and Antoine was able to untap some lands and play Meloku. Richie equipped a Jitte to his Dust Drinker and offered a trade with the blue legend, which Antoine accepted. With mana available, he played Yosei.
Antoine got to go old school with Sensei's Divining Top and all the shuffle effects in his deck. He did not like the three land sitting atop his deck so he reshuffled with Time of Need for Myojin of Cleansing Fire and at the end of Richie's turn hoped to find three nice ones.

Rich was also rigging his deck with Top and he conjured up Final Judgment. Antoine activated his in hopes that Defiance would await him but he had to let it resolve. Kodama of the North Tree was the play for Antoine. Richie smiled at the two untapped Plains that meant there was no counter for him to fear, "Nice tap there." Rich played another Yosei.

Antoine took it down with Hero's Demise and Kodama rumbled over for six. Rich played and equipped Meloku - he had a free turn thanks to the Yosei effect. The score was nine to six in Antoine's favor and the game would have been gaining traction in his favor as he thinned his deck and spun his Top if not for Meloku. He ended up making a somewhat defensive Sway the Stars with two green floating. 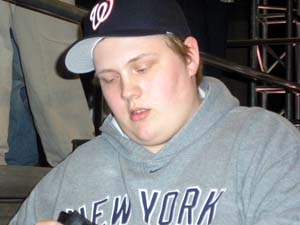 Hoaen hoped for a 4-2 finish Friday.

At this point he was hoping to find an Elder, Sustainer, or in a best-case scenario play a land and Kodama's Reach. Instead his only possible play for the turn was a land and Heartbeat of Spring, which would give Rich first crack at the mana advantage every turn. He passed the turn and burned down to five from the floating mana.

Rich recovered with a little more panache when he played Top. Antoine jumped the mana curve on new turn-three with Kodama's Reach while Richie had Time of Need for Hokori. Antoine untapped and surgically removed them via Cranial Extraction. He also saw two copies of Yosei, Time of Need, Meloku, and Genju of the Cedars - although Rich did not have any Forests - a problem he remedied on the next turn.

A second Cranial from Ruel took out the Melokus but he was about to go to one from the Genju. He let his handful of lands trickle to the table and they shuffled up for the rubber game.

The difference in this match was that the winner would be sure to play Saturday while the loser would have to fight for his tournament life in the final round. Hoaen was not sure which prospect he dreaded more, "I can't wait to go 4-2 today and wake up tomorrow morning and lose the first round."

Antoine announced he would be keeping his hand even before he had seen all seven cards of his opening hand as he flashed Divining Top. He had all four types of mana by turn four and dropped Meloku. Rich accelerated to six with his Sustainer and Elder and softened the blow of Meloku with Patron of the Kitsune. Antoine announced, "Yosei" as he cast Cranial Extraction on the next turn.

Rich made life complicated with Jitte. Antoine cast Heartbeat of Spring and Extracted Richie's Melokus. He then topped into three lands. He flipped the Top up onto his deck and used the land for a shuffle from Time of Need for Yosei.

Patron dropped Antoine to nine and killed the Meloku with Jitte. Rich stuck the fork in him by casting Time of Need for Hokori and leaving him without the mana he needs for the deck to operate. The match ended shortly thereafter with a dumbstruck Ruel looking at his depleted mana. After the match, Antoine could not adequately explain why he failed to Extract the Hokori's that were the worst possible card Hoaen could play against him.

All Richie knew was, "I think I got pretty lucky."