Round 5: Richard Grace vs. Andrew Varga

Grace has made the trek over from New Zealand to attempt to become the champion of GP Sydney, a title which would go nicely with his current one of New Zealand champion. Varga on the other hand is the current Australian National champion and is looking to make up for a poor showing at worlds. Grace won the roll and elected to draw first. 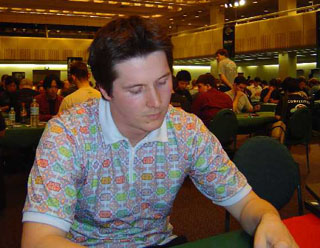 A second turn Leaden Myr from Grace is met by an Annul from Varga, who then used his third turn to play out a Dragon Blood. Grace played out a little Yotian Soldier and pounded it into the red zone past Varga's freshly summoned Tel-Jilad Exile. A Talisman of Dominance allowed Grace to cast a cheap Thoughtcast, tapping him out and ending his turn. Varga charged in with his Elite and when it was blocked by the Yotian Soldier he cast Predator's Strike, trampling over the top for a point of damage. Grace cast a Spikeshot Goblin and when Varga tried to Dragon Blood the Exile at the end of the turn it was blown away with Shrapnel Blast, forcing Grace to sacrifice a Talisman. Varga continued to put on the pressure casting an Alpha Myr before passing the turn.

Grace looked like he was going to regain control of the match when he summoned a Viridian Shaman, targeting the Dragon Blood, and then pinged off the Alpha Myr with his Spikeshot Goblin in response to the +1/+1 counter. Culling Scales from Varga was the perfect answer, along with a Malachite Golem, as the Scales was going to force Grace to sacrifice a permanent for the next couple of turns, beginning with the Talisman of Impulse. Viridian Shaman entered the red zone dealing 2 damage as Varga took it on the chin, with Grace bringing down an Elf Replicant after combat. Culling Scales once again did its job knocking out the Spikeshot Goblin and Varga used Deconstruct to remove the potential Elf blocker. The mana generated by the Deconstruct was sunk into a Quicksilver Elemental. Culling Scales was sacrificed during Varga's next upkeep and in bashed the Elemental and the Golem.

Grace sideboarded in a Culling Scales and an Island for a Talisman and Viridian Longbow.

Varga sideboarded in a Talisman, an Ancient Den, a Plains and an Arrest for two Forests, a Yotian Soldier and an Alpha Myr. 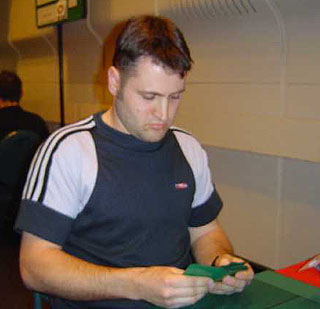 Varga was once again forced to play first and Grace parised away his first hand electing to keep his second hand, with a sub-optimal 5 land one spell. Neurok Spy was the first spell of the game from Varga but with no artifacts in play on Grace's side his ability isn't active. A Krark-Clan Grunt from Grace was unwilling to take a hit for the team and he took two damage, staring down a Goblin War Wagon that Varga had cast.

Grace pondered his next move for a few moments, which seemed like an age in this match at the speed these two players are moving at, finally deciding on a Yotian Soldier. When the Spy entered the next attack phase unblockable, Grace decided it was time for a trick, eating the Soldier with the Grunt and attempting to block but Varga was ready with a Regress, bouncing the grunt back to Grace's hand.

The Grunt made his second appearance to the board and collided head on with the Spy during the next attack phase, finally taking him down, with Varga summoning a Tal-Jilad Archers after the combat phase. "Gush?" joked Grace, as he played his main phase Thoughtcast, "Gush at Sorcery Speed?" responded Varga as he giggled, "Sure!" Varga then pushed his Archer and Wagon into the red zone dealing Grace a quick five damage. Wizard Replica joined the team of Varga and Grace could only respond with a Spikeshot Goblin. It refused to be chump bait during the next attack phase and Grace was dropped down to a dangerously low 2 life. When Grace drew nothing of significance in his next turn he succumbed to the onslaught.