Round 5: Ryan Fuller vs. Lucas Hager 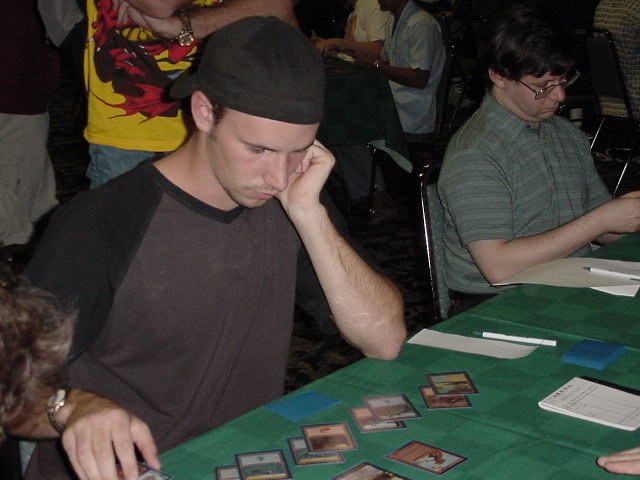 This was a battle of the playtesting partners. Both Lucas Hager and Ryan Fuller were top 8 finishers at Pro Tour Toyko. They are also rooming together for Grand Prix Denver, so while not happy to be playing each other, they remained in good spirits throughout the match. Ryan Fuller wanted to make sure that he can say hi to all of the beautiful women of Belgium, while Lucas - not wanting to be outdone - also wanted to say hi to someone special, his playtesting group, Davin, Steve and Chris.

Hager was running the same R/G deck he piloted to the top 8 of Tokyo, his only change was the addition of a single Tinder Farm, though as we will see, little changes can have a big impact. Fuller meanwhile is running some truly breaking tech. He is packing the U/W/R beatdown deck which carried one of the Japanese competitors to an undefeated first day, and he just found out about it minutes before the tourney.

Lucas wins the roll, but starts off with a Paris. Interestingly, both Fuller and Hager shuffle each other's decks, practicing what all the pros preach, always shuffle your opponent's deck, no matter who it is. After getting his six cards, Hager plays his trusty Tinder Farm and they are off to the races. A blitz of 2 power creatures hit the board on both sides of the table, with Lightning Angel taking it to the air for Fuller on turn 4. It's met with a Flametongue Kavu by Hager. On turn six, Hager sacks his Tinder Farm, kicking up a Skizzik and combined with his FTK brings 9 points of love to his opponent. After combat he drops a forest and lets loose the goose. (Blurred Mongoose that is). A flurry of burn from Fuller on the next turn clears Hager's board of all but the goose. Hager kicks up a Kavu Titan on his turn and brings it with the goose. Another flurry of activity from Fuller sees an FTK and Fire for 1 to the Titan and 1 to the head and a Meddling Mage naming "Green Battlemage". Fuller looks at Hager sheepishly after this one, perhaps realizing that he now has quite a crowd around him, but Hager, ever the gentleman says he knows what is meant. FTK trades with the Goose and the Mage brings the beats on the following turn, followed by a pair of Rages to finish off Hager. 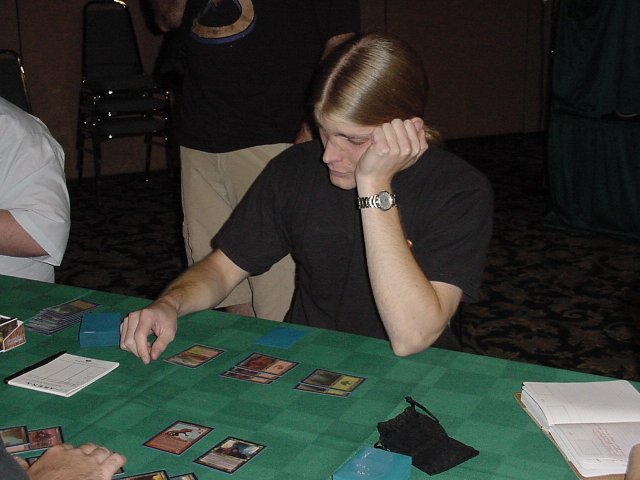 Hager plays first again, and again heads off to France. During the extended shuffling that ensues by Hager, they look over at Steve OMS's featured match against Mikey P. Both are worried about the "new domain" deck that Steve is running. After returning from Paris, Lucas leads off this the Tinder Farm again. The next few turns are a pure bloodbath, as dueling come-into-play creatures hit the table. One exchange was
Fuller - Flametongue your Titan
Hager - Battlemage your FTK
Fuller - FTK your "Green Battlemage"
Hager - Scorch your FTK

When the dust finally settled, Hager has a Skizzik and Fuller has a Galina's Knight absorbing 2 points of damage a turn for him. Fuller comes back with a doubly kicked Rakavolver, that's right the 5/5 flying spirit linked, kill target R/G deck, creature. Hager takes a deep breath, and shakes his head. He untaps, sacrifices the Tinder Farm to get him a full 8 mana and casts another Flametongue Kavu and a kicked Thornscape Battlemage, dragging down the Volver before it can get into action, the little Tinder Farm that could, did. The next turn saw these creatures swarm Fuller for the kill, with a little help from a Ghitu Fire.

This time Fuller gets to play first and low and behold he is off to Paris. This time it's lethal, as his hand contains no non-pain way to generate U or W. While he's definetly in the game, casting Galina's Knight, Repulse (on a Kavu Titan) and a 4th turn Lightning Angel, he's taken more damage from his lands than he has managed to deal to Hager. While the life is inconsequential in control match-ups, against R/G this is very bad indeed. The little Tinder Farm that could gives Hager another big boost, giving him enough mana on turn 7 to cast an unkicked Skizzik and a Ghitu Fire for 3 that ends the game in short order.