Round 5 Ryan Fuller vs. Valentin Maestro 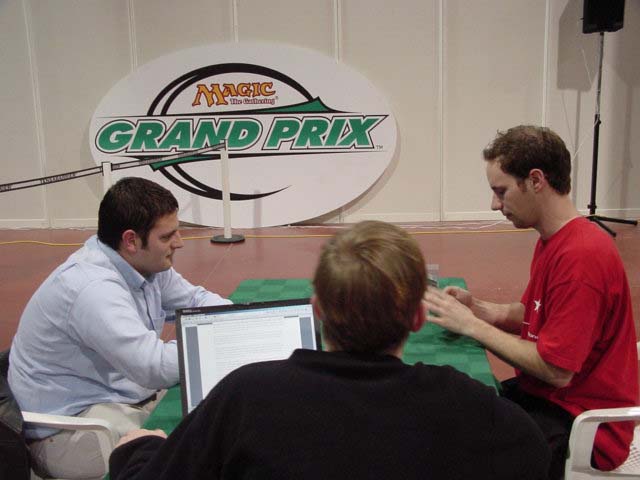 Valentin won the toss, but his opening hand contained only one swamp. He thought for an entire surprising minute before eventually deciding to take a mulligan. There were no lands at all in his second draw, which put him under serious pressure in game one before a card had been played in anger.

He finally found a satisfactory hand with only five cards in it, with two lands and a Rogue Kavu it was about as good as it could get for a double mulligan. In fact, the Rogue Kavu hit Ryan down to fourteen lives before Fuller stabilized by casting a Protection from Red Voice of All.

Fuller's card advantage looked to be the crucial factor at this point, as he had an Urborg Emissary to deal with the Rogue Kavu, and two removal spells sitting safely in his hand. The Spaniard played a Phyrexian Reaper which was removed by an Exotic Curse, and Ryan started to go on the offensive, attacking with the Urborg Emissary and the Voice of All twice.

Valentin attempted to trade the Emissary with his newly resummoned Rogue Kavu, but Ryan prevented two damage with a Deliver. The game was basically over at this point, as he had Terminal Moraine in hand, allowing him to cast the Crosis, the Purger which had resided in his hand for the entire game.

Maestro removed the Urborg Emissary, but was unable to deal with Crosis, which came over next turn. Ryan got to look at the Spaniard's entire hand with the Dragon's ability. Valentin was stuck with lots of green cards in hand - but with no Forests to play them. Perhaps he would have been better conceding rather than show Ryan his third color and possibly give him the chance to sideboard in something like Slay. 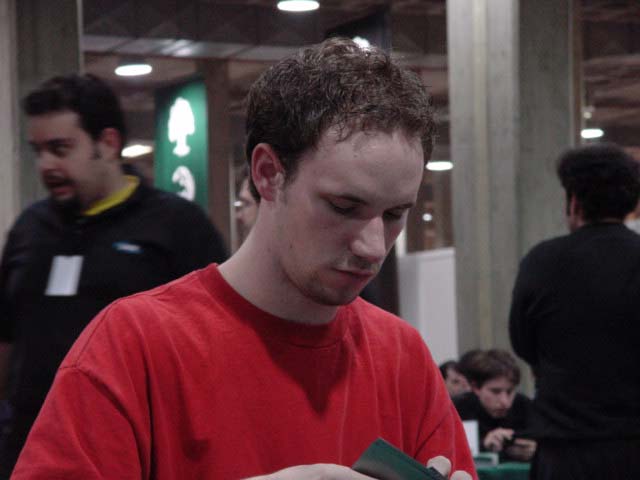 Valentin chose to go first for this game, and this time it was Ryan who had to take a mulligan, with a hand full of white cards and only one Swamp and one Island for mana. His six card hand was much more satisfactory however.

Valentin played an Urborg Skeleton on the first turn - and sent it across for zero damage on turn two. Unfazed, Ryan opted to take the damage, which reduced him to twenty.

To prevent any more beatdown of this sort, Fuller played a Shoreline Raider, which was immediately Soul Burned. Ryan had a great hand at this point, especially if he could draw another land, with Ordered Migration and Ertai the Corrupted.

Bizarrely, the Spaniard played Pouncing Kavu without kicker, despite having enough mana to cast it with kicker due to his Star Compass - a less than masterful play by the Maestro.

His entire offense was immediately halted by the 3 / 4 Ertai. Ryan appeared confused by his opponent's rapidly accumulating selection of dubious plays, but with a hand as good as his was at this point - and facing no sort of attack - he seemed to be firmly in control. 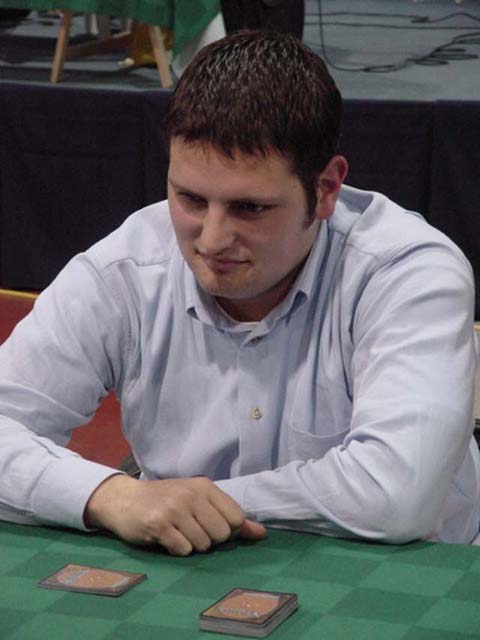 A Yavimaya Barbarian did manage to get past the Fuller defenses, bringing him to 17, and he was forced to sacrifice his Samite Pilgrim to prevent Valentin gaining five 1/1s from a Saproling Symbiosis. Ryan's defensive position continued to improve as he played a Prison Barricade. Perhaps he was marking time until he drew a Mountain so that he could get maximum benefit out of Ordered Migration. It was immediately sacrificed, however, to prevent Ertai being Plague Spored.

Ryan then cast Ordered Migration for three, giving him the opportunity to counter three spells. His opponent was by now reduced to desperate measures - attacking in such a fashion that he lost a creature to deal only two damage to Ryan.

The 1/1 bird tokens from the Ordered Migration rapidly reduced Valentin to eleven, and his entire hand, which consisted of land only, was discarded to a Hypnotic Cloud. Next turn the Spaniard was forced to scoop as a Zanam Djinn joined the fray on Ryan's side.