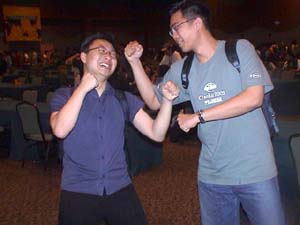 Sam Lau has a national championships, a GP and two Top 8 APAC finishes to his name. TBS needs no introduction. For those confused, he is the Grand Prix - Capetown Champion, and a Pro Tour regular. His friendly nature has earned him a fan following in the thousands. He is also a friend to children and adults alike.

Apparently both have been spending their bye time practicing against each other. What has typically happened in the practice games is that Ben's Strengths of Lunacy and discard effects end up wrecking Sam as he has very little creature removal. Seck also has this red creature called Kamahl that I hear is quite good. As you may have already gathered from the other Sideboard article, Sam's deck is less than stellar.

Ben won the roll, elected to play first and kept his opening hand. Sam had a one land - an Island. He also had Phantom Whelp and Wild Mongrel but chose to play it safe and cashed in for a new set of cards. His six cards were much better with Wild Mongrel, Aquamoeba and land to cast them with.

Ben didn't have any plays for the first two turns. Sam was more than happy to make a turn two Mongrel. Seck missed his third land drop and said go. Sam swung and made a Krosan Avenger. Ben responded to this devastating opening meekly - with Putrid Imp. He'd missed another land drop. Sam deliberated and decides it was worth trading, coming in for four and bringing Seck to 14. Aquamoeba entered play. On turn five Seck entered his end step and discarded Diabolic Tutor, still not having found a land. Sam swung for three bringing Seck to 11 and cast Aven Windreader. Seck scooped. 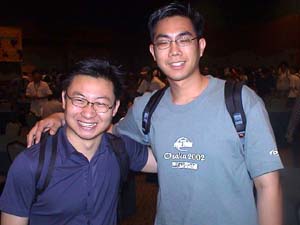 It was at this point the question of whether not to ID was raised. Ben didn't feel very lucky, having bad feature match luck and just having lost the first game. Sam knew that he needs an above average hand to have a chance of beating Seck, and if both get similar hands Ben's cards quality will overpower him. Both were at 4-0, so if they ID'd then they each would need to win just one of two more matches to safely make it to Day Two.

Ben said he would look at his opening hand first. It was a one land hand, and he was going first. He offered the draw. Sam accepted, revealing his own one-land hand!

Both played it out anyway, and Sam took the second game and the third - it was certainly a shrewd move for Ben Seck. For Sam, we will need to wait till Round Seven to find out.