Round 5: Satoshi Nakamura vs. Jun Nobushita 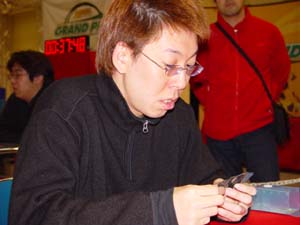 Everyone's favorite man about town, Satoshi Nakamura, surprised no one by showing up today with TurboLand in tow. Not only is it one of his hallmarks, how could he play anything else after Zvi Mowshowitz used it to walk away with the title at New Orleans? His opponent, the consummate clown Jun Nobushita, is with a crazy black-green control deck, whose only creatures are Nether Spirits, aiming to establish a Contamination lock.

Nakamura's hand wasn't great, but it held two forests and Oath of Druids. He drew Scroll Rack before Nobushita brought any pressure, so things were looking up. Nobushita's first spell was Cabal Therapy, and he looked for Time Warp. He scored double, leaving Nakamura with just two Gushes and Oath of Druids. He drew a non-land, and Racked for four. They were better, turning up Capsize, Yavimaya Coast, Accumulated Knowledge, and forest. He chose to fire off the first Knowledge right away, rather than waste a turn maximizing them to the full seven. Intuition followed and he drew four.

Nobushita had meanwhile played Call of the Herd, and was attacking with the token and a Treetop Villagae. Soon Nakamura had built up to six land. Capsize with buyback on the token convinced Nobushita to fire off his Deed, getting rid of the Rack and Capsize. Down came the Oath of Druids, and the game stalemated. Both players played out their lands, immobile. Nobushita stole a Counterspell here and there with Duress.

Eventaully Nakamura found a Horn of Greed, but had been hardcasting his Gushes and playing out his lands, so though he got a huge boost, there was a turn where he had three Horns and a pair of Explorations and no land to play. Nobushita picked apart his hand as best he could, but Nakamura drew Scroll Rack, and after Racking into Battlefield Scrounger he could finally start rolling. He Scrounged his Time Warps and Accumulated Knowledge back into his library, then Intuitioned for one. A few lands gave him a full grip before casting it. Nobushita was ready with Diabolic Edict.

Still, Nakamura wasn't in much trouble. The only close call came on his next turn when after drawing all but four of his remaining cards he had yet to find his Krosan Reclamation. He played another land, and drew three. The Reclamation was smiling back at him. From there it was easy, putting the Scrounger and a Counterspell back in his deck, setting up protected recursion.

Nakamura had to mulligan a no-lander, but his next six were great. Nobushita tried to bust it up as best he could with a pair of Cabal Therapies, but Nobushita was left with Scroll Rack, and was able to manipulate his draws. Nobushita got Nether Spirit into play, gearing up to re-use his Therapies. The first fell to Counterspell, leaving Nakamura with just Counterspell and Gush. The next turn Nobushita tried again. This time, Nakamura hid the Counterspell with his Rack, showing just Gush and forest. Nobushita went for the Contamination anyway, and fell right into Nakamura's trap. 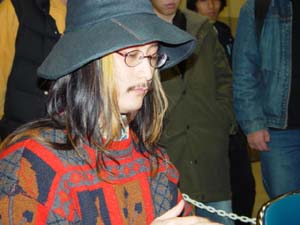 From there, things stagnated. Nakamura found himself an Exploration and Horn of Greed, and then another. Nobushita had to wait for a green source to rid himself of Nakamura's Exploration with his Entombed Ray of Revelation. Nakamura meanwhile had to restock his deck with Counterpsells via Krosan Reclamation. He had taken too long, so Nobushita doubtless had Diabolic Edicts at the ready. Nobushita finally had some pressure thanks to Treetop Village, but neither was getting anywhere fast.

Eventually Nakamura went for it. Having found the remaining Explorations he drew up half his deck, preparing a hand of Scrounger, three Counterspells, Time Warp and two land, thanks to his Scroll Rack. He Warped, then dropped the Scrounger. He countered a pair of Diabolic Edicts. Time was called at that point, sparing Nakamura the trouble of showing off the kill.