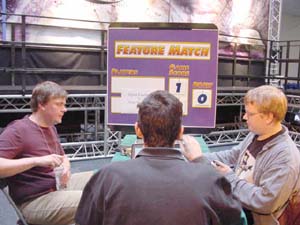 Sigurd is a Pro Tour champion, Tomi Walamies... well, he has been in a Pro Tour finals twice. He is also one of the best tournament report writer in the game. They are both Nordic, and their haircut makes them look very, very similar today.

As in almost every single Rochester Feature Match they discussed the draft while shuffling for the first game.

Sigurd (for the coin flip): "Do you want the pound of the Queen?"
Tomi: "I want the Queen."
Sigurd: "Good choice. I would have chosen the Queen as well."

Sigurd cycled Gempalm Polluter on his second turn with an ironic "take nothing" to find his third land, Walamies landcycled a Slipstream Eel and they both played morphs to started the hostilities.

Eskeland played a second morph and on the following turn agonized over his options. Obviously he couldn't figure out which morph Walamies had and it was killing him. Finally he sent his first morph in. Walamies blocked. 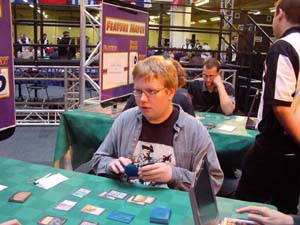 On the next turn the two morphs traded blows... but Eskeland's was Zombie Cutthroat.

He followed that with Cruel Revival on Walamies next blocker and facing three creatures with nothing on the table, Tomi Walamies scooped. 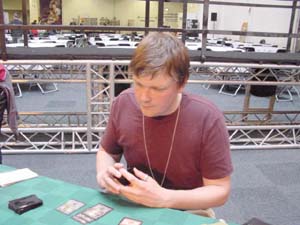 The successive swings brought both players to thirteen and after deep consideration the Norwegian played Clutch of the Undead on the Warchief to even things out a bit. On the next turn Walamies simply sent the morph in and played a bomb: Jareth.

But even big rare bombs fall to commons. Cruel Revival struck a blow for the cards with a black set symbol. Of course, Tomi Walamies wasn't about to be put of by this. He played another rare: Day of the Dragons.

Since Sigurd's deck is Black-Red he doesn't really have any outs against the enchantment. He sent his Legion in and played Sootfeather Flock. The score: Sigurd 7-6 Tomi.

Both Dragons entered the Red Zone and the Flock took one for the team. Walamies played another rare: Mistform Ultimus. Eskeland sent his whole crew in and with the damage on the stack cycled Gempalm Polluter for enough damage.

Tomi: "If I had attacked with the Stinger I could have won."