Tanahashi won the die roll and chose to go first. After a long deliberation from Juza, he decided his hand was unworthy, sending it back for a fresh six.

The first game started off in earnest with Juza casually tossing an Inquisition of Kozilek at Tanahashi, revealing a pretty decent hand containing two copies of Mana Leak, Go for the Throat, two lands, and an Abyssal Persecutor. Juza did not think too long before taking a Mana Leak. Next turn, Juza decided to play a Ratchet Bomb directly into the Mana Leak Tanahashi was holding, but the Japanese player declined to counter the spell. Instead, he just untapped, played a land, and then fire an Inquisition of his own right back at the Czech superstar, stripping an Everflowing Chalice from a hand containing three lands. An Inquisition from Juza was met by Mana Leak this time around. Either he was protecting something or he knew it was going to be the card Juza had him discard, so he at least pretended like he was. 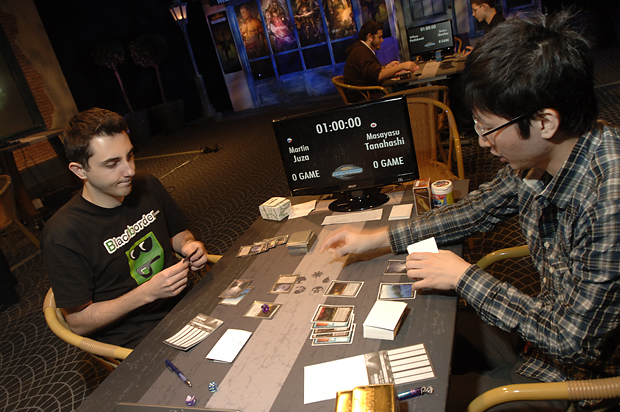 At this point, Juza had a pair of Inkmoth Nexuses on the battlefield, and they started attacking. The first got hit by a Tectonic Edge before it could do too much, but the other hit home. On the following turn, he dropped a Jace, the Mind Sculptor into play. Rather than fix his hand, as most players tend to due on the first turn he's in play, Juza started building him towards his ultimate. Tanahashi found an answer to Jace in a Ratchet Bomb, though it would be slow in coming. Rather than wait, he used a Jace Beleren to simply off the planeswalker before he could go off.

This whole time, Juza had been whittling away with his Inkmoth Nexus, taking Tanahashi closer to death with each swing. When a second joined the fray, things looked grim for the Japanese player. Poison counters added up in two point chunks. After reaching eight counters, Tanahashi managed to use Preordain to dig deep enough to find a Spreading Seas, which he used to turn one of the pair into an Island. He couldn't find an answer to the second one, and he succumbed to poison just a turn later.

Tanahashi started off with the same quick reliance on discard as he had in the first, hitting Juza with an Inquisition of Kozilek on the first turn. It hit an Inquisition out of Juza's hand, revealing a grip of five lands and Tezzeret, Agent of Bolas. Juza did manage to find a Sphere of the Storm for his third turn, but he was ramping to nowhere. He couldn't even cast his Tezzeret for fear of counterMagic. When Tanahashi cast Jace Beleren on the following turn, Juza once again had to simply play a land and pass the turn. He stopped the Ratchet Bomb on three, added a Tumble Magnet to his toolbox, and passed the turn. 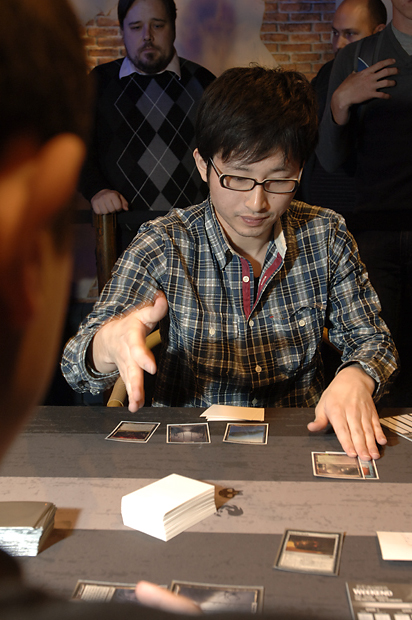 Tanahashi was drawing enough cards off his Jace Beleren that he soon had to start discarding. Juza, tired of running behind on cards, attempted to exact a little justice with his own Jace, the Mind Sculptor, but it was hit by a Mana Leak.

Tanahashi managed to stick a Precursor Golem and two of his brothers, and Juza found himself behind the eight ball. All he could do was play a Mindslaver and a second Tumble Magnet and hope. When Tanahashi took his turn, he whiffed on an Inquisition before attacking with his golems and passing the turn. Juza stopped as much as he could with the Tumble Magnets, surviving the turn, giving Juza the chance he needed.

Tanahashi's hand was quite good. Juza took Tanahashi's turn, and started turning things in his own favor. First, Jace turned traitor, using his first ability, and expending his last loyalty counter, to draw Juza a card. After that, the Jace Beleren in Tanahashi's hand followed suit. With all Jace activations out of the way, Juza simply forced Tanahashi to play the Jace, the Mind Sculptor in his hand, killing both of them. He then sacrificed Tanahashi's Ratchet Bomb before it could get more than one counter on it. This left Tanahashi with a Precursor Golem and a Grave Titan in his hand.

Juza began his own turn by casting Tezzeret, Agent of Bolas. He used its +1 ability to search the top of his deck, finding himself a Kuldotha Forgemaster, the marquee card in his deck. After playing the wicked engine of his deck, he passed the turn. When Tanahashi tried to attack him on the following turn, Juza was ready with the Tumble Magnets. All he could do after that was continue on and play his Grave Titan. 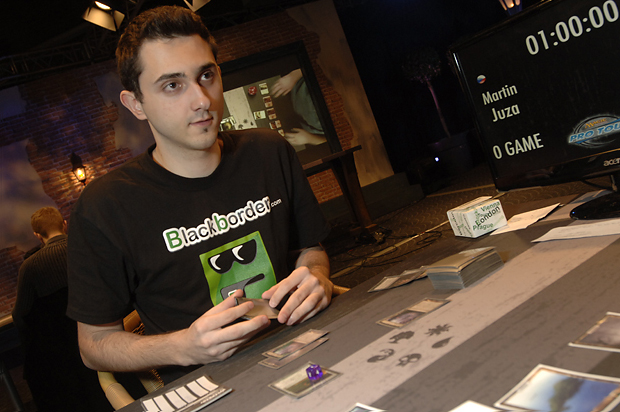 Martin Juza is a veritable machine.

Now Juza had an active Kuldotha Forgemaster. Before he went using it, though, he had a Jace, the Mind Sculptor that he used to draw himself a Brainstorm. Before passing the turn, he also added an Everflowing chalice for 0 to his side, just beefing it up. He also found a second copy of the Forgemaster, should it come to it. Finally the moment arrived. He activated his Forgemaster, thinking for a few minutes about how he could use the artifacts in his deck to pull this game out. After peeling through his deck, the light bulb above his head went off. He plopped Myr Battlesphere into play. That, combined with the Tezzeret he had in play, resulted in a 16-point life drain, dropping Tanahashi to 2. When his deck failed to provide him a Magic answer to the situation, Tanahashi conceded.