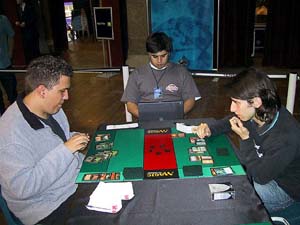 Stefano played an Aquamoeba on his second turn while Stan only dropped Swamps.

Next turn a Vigilant sentry teamed up with the Aquamoeba and the Dutch had to find an answer. He cast Whispering Shade with four Swamps in play. Only during his next turn did he find a Mountain but it didn't seem to be enough, as he only held land and no real threat. Fiore realised this and played Churning Eddy targeting the Shade and the Mountain. He was making way for his Aquamoeba to which he was constantly discarding to. Meanwhile van der Velden was able to play Arcane Teachings on his sole creature. Stefano summoned a Mirror Wall and attacked with it promptly.

Although the Dutchman wasn't too happy about his situation he was no longer under pressure. He cast Liquid Fire to kill his opponent's attacking Wall. After long time of thought the Italian ended his turn. Stan could now start his own offence but didn't attack to keep his six life. Only after his opponent cast Aven Windseeker he attacked pumping his creature up to an 8/8. His opponent was holding Fiery Temper in hand and thought he had won the match since he could attack for three and kill his opponent. But van der Velden played a Mutilate for eight and cleared the table except for his own creature, which died eventually to the Fiery Temper.

Stan then summoned Pertravrak to take Stefano's sole mountain for him not to activate Pyromania. Wormfang Crab entered play at the opponent's side and went into battle putting van der Velden on three life and thinking. The Dutchmen scooped. 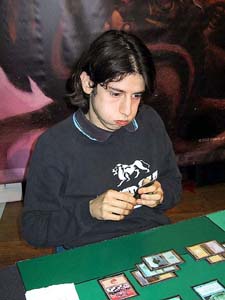 Once again Stefano started aggressively with a turn two Phantom Nomad. That time though, Stan had a Crypt Keeper and a Cabal Torturer, which he immediately played out.

Stefano enchanted his Aquamoeba with floating shield naming black and attacked with both his creatures. Two Petravraks from van der Velden's side limited Stefano to two mana. The Italian got his third island out but held mostly white cards.

Some turns go by with damage being dealt by the Dutchmen. When he attacked with both his Petravraks Stefano tried to get one of his two Plains back but due to a Lava Dart he was unsuccessful. One turn later Stefano found another Plains and cast Border Patrol. Still, Stan's Frightcrawler was picking on his opponent's life. After some thought he played a Waste Away and combined it with his Torturer to kill the giant crab. Some turns went by and players crowded up the playing space with creatures. Van der Velden seemed to have more removal and was able to win the edge with it.

Stefano scooped not long after, since the disadvantage he had gotten from a double Petravrak had become too damaging for his game. 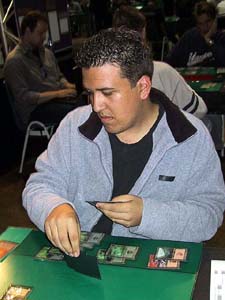 Stan took a mulligan and was happier about his second hand. This game though both players just dropped lands. Only till the fourth turn where Sefano played Llavan Cephalid Empress and the turn after a Mystic Familiar.

On the other side of the table, the Dutchmen cast a Grotesque Hybrid, thereby stopping both creatures from attacking.

Stefano had a plan though, Strength of Isolation on his Empress to have a three damage a turn going against his opponent. Luckily for Stan he also had a three damage per turn engine: Caustic Tar. But the Italian seemed to have it all and cast an Aven Cloudchaser.

A Mutilate cleared the table but a Wormfang Crab kept the Italian in the damage race. The Dutchmen summoned a Soul Scourge, which got a Cagemail on it. He got nervous and desperate and was forced to enchant his creature with Arcane Teachings.

A Border Patrol from the Italian didn't exactly make him feel better but he drew an answer for the Crab: Waste Away. A lone Petravrak took Stefano's only Mountain and disabled him from playing a Fiery Temper from his hand.

Stan forgot to deal 1 damage to his opponent at the end of the turn and was not too pleased about himself. He was looking for an answer to win for a time then and decided it would be best to get back his mutilate via Anarchist.

Stefano attacked with everything he had fearing a Mutilate. Stan summoned Petravrak's twin brother and removed a Plains. From the Cephalid Coliseum Stefano removed before the Petravrak entered play he got a Churning Eddy, which he used the turn after, trying to get back his Mountain to have enough mana to finish his opponent off with his Fiery Temper.