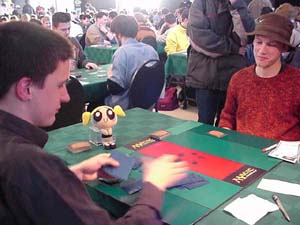 Jelger Wiegersma vs. Stefan MayerStephan Meyer is the young German player who swept the top 8 in Grand Prix-Vienna with an ultra-aggressive red-green deck. He'd also taken the amateur prize despite being previously qualified for a Pro Tour as an absent team-mate had prevented him from competing. Jelger Wiegersma is a strong Dutch player who finally got his breakout performance with a top 4 at PT New Orleans. A recent top 8 at Grand Prix-Heidelberg shows he's on form with this format.

Game 1 was short and bloody. Meyer's turn 2 Barbarian Outcast was sent straight to the graveyard by a Firebolt and he didn't make another monster until a Pardic Lancer came onto the table on turn 5.

By this time Wiegersma was nibbling for two through the air with a Skywing Aven and had a Chainflinger on the ground. He matched Meyer's Lancer with a Zombie Assassin.

Stefan MayerUnperturbed Meyer sent the Lancer into the red zone and added a second. The Firebolt swung back to take care of that and Wiegersma served for seven.

Meyer was in no mood to get defensive and attacked with the remaining Lancer and before sacrificing a Ravaged Highlands so he could summon a Rabid Elephant. Wiegersma cleared this out of the road with a Faceless Butcher and another swing for seven was too much for Meyer.

Wiegersma had to mulligan but Meyer didn't really capitalize as his only play was a Pitchstone Wall. He then failed to lay a fifth land while Wiegersma developed his board with Psychatog, Dreamwinder and Zombie Assassin.

Wiegersma cast Deep Analysis and then flashed it back while Meyer was finally able to drop a fifth land to make a Zombie Assassin.

Psychatog in combination with a Flame Burst bust though the wall and then the card advantage from the Deep Analysis started to show as Wiegersma sent in the 'tog with a full hand of seven cards to back it up. 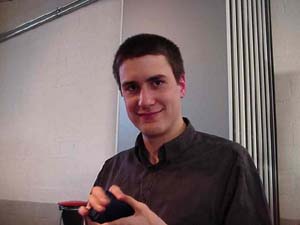 Jelger WiegersmaMeyer wasn't about to let that cow him and smashed it with a Muscle Burst enhanced Assassin. Wiegersma let the 'tog die and summoned a Chainflinger. Meyer took that down with a Torturer and Afflict. A Firebolt soon got rid of the nuisance Torturer.

When Wiegersma dropped a Caustic Tar on one of his lands Meyer was in real trouble as he also had a Skywing Aven to contend with. He tried to race but couldn't keep a creature on the table and eventually a Morbid Hunger brought the game to an abrupt end.