Round 5: Sturla Bingen vs. Warren Marsh 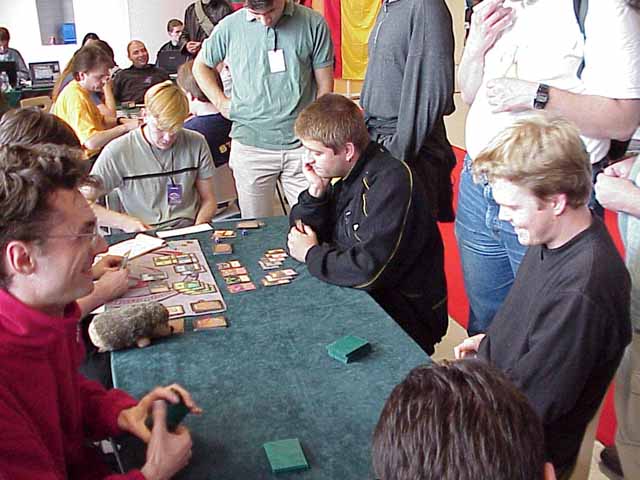 Having seen the cards that Warren was able to draft before this match started, I have to say that he was the firm favourite. Boasting both Alexi, Zephyr Mage and Mageta, The Lion, as well as a host of Rebels that he could search for the matchup seemed very one sided. Sturla's deck was a solid Green/Black beat down deck whose only hope was to get a good start and race Warren's control.

Both players have slow starts, Sturla's first 2 drops being a seal of strength and a Spidersilk armour, shortly followed by a Fen Stalker. Warren opened with a turn 3 Steadfast guard and a Turn 4 Ramosian Commander. Sturla started the beat down with the Stalker and backed him up with a Pygmy Razorback. Warren had the answer in his hand and made Alexi. Sturla didn't have a removal spell in his hand, so served with the Fen Stalker. Next turn Warren laid the 6th land meaning that his Commander was active. He attacked with the Steadfast guard trading it for the Razorback and said 'go'. Sturla attacks with the Fen Stalker again, but this time Warren blocks with the Commander. Sturla blew the seal on the Stalker, but Warren Orim's cured the commander keeping both alive. Sturla cast Belbe's Percher, and Warren searched for the Lightbringer in Sturla's end step. Warren attacked with Alexi putting his opponent on 15 life. Sturla returned the favour beating with the Stalker and the Percher to put Warren on 12, and finished with a Battlefield Percher. Warren searched up a Lieutenant, nuked the Percher with the Lightbringer, then Served with Alexi and the commander, putting Sturla on 10. Warren cast a Mine Bearer and says 'go'. Sturla tried to beat Warren down with the Fen Stalker and the Percher, but Warren used the Lieutenant and chumped the Stalker with a Lawbringer. The Percher broke through leaving Warren on 10 and in easy invigorate/wild might kill range. Warren wasn't too panicked though as he had the mine Bearer for backup and attacked again with Alexi and the commander. Sturla was at 5, Warren at 10. Sturla attacked with the Percher and the Fen Stalker, but Warren blocked the Stalker then killed the Percher with the bearer. Sturla cast soul strings to have back the Stalker and the Razorback, then remade the stalker. Warren spent the turn holding back and after being beaten for 4 and robbed for 2, bounced them all with Alexi. Sturla was forced to burn for 1, which was still in his pool, at which point he conceded.

Warren again started slowly, making a turn 3 Belbe's armour and nothing on Turn 4. By comparison Sturla opened with at turn 2 Trellis, a turn 3 silt crawler and Seal of strength and a Turn 4 Battlefield Percher. On Sturla's turn 5 he beat Warren down to 15 life and then cast the highway robber. Warren made the turn 5 Mageta, but was forced to block with it in order to stay alive that turn. Warren concedes and they moved onto game 3.

Sturla was the one struggling to make creatures in game 3 and when Warren opened with a Glittering Lion, Belbe's armour and a Turn 5 Mageta he looked in Solid control. Sturla had 10 turns in which to draw an answer to the Legend, but couldn't and Warren added insult to injury by making Alexi, then killing him with both Legends.