Round 5: Terry Tsang vs. Pete Radonjic 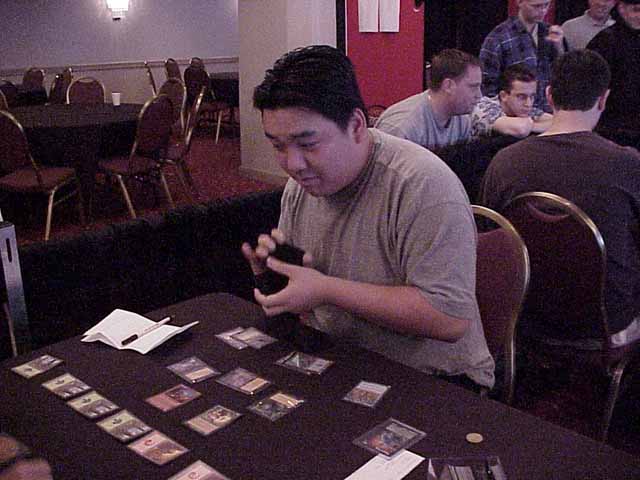 The fifth round feature match pitted two local powerhouses: Pete Radonjic and Terry Tsang. Between them, these two players have amassed a jaw-dropping total of 26 Pro Tour appearances (and counting). Pete and Terry also shared success, both making the 1998 Canadian national team. That team finished fourth in the team standings that year. (Pete also made the '96 team.) Both players drafted good decks - you can CLICK HERE to see an analysis of their draft. Since they both are 3-1 entering this round, the winner should be in contention for the Top 8 at the end of the first day.

Game 1: Pete won the coin flip and elected to play first. Neither player played a spell until his third turn: a Rushwood Herbalist for Pete and a Belbe's Percher for Terry. The pace picked up as Pete played fourth turn Zerapa Minotaur and sixth turn Scoria Cat. Terry's game played a Rathi Intimidator. When Pete tapped out to play the Scoria Cat, Terry untapped and played Withdraw on the Cat and the Minotaur, temporally putting a halt to Pete's offence. He also searched out an Agent of Shauku with Rathi Intimidator. Over the following turns, the game swing completely in Terry's favor. When Pete replayed the Scoria Cat, Terry gladly used a Sever Soul on it. A turn later Pete top-decked Thresher Beast, but Terry had a Sever Soul for it, too! Pete drew no answers to Terry's evasive creatures, and the game soon ended with a win for Terry. 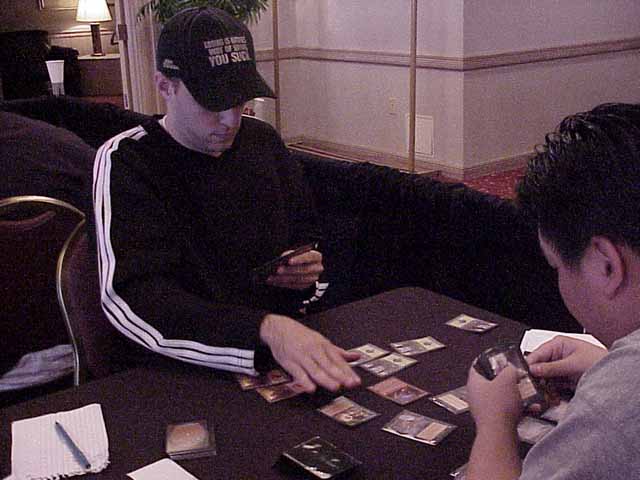 Game 2: Pete played first once again, and started off with the "not so strong" third turn Spore Frog, Terry answered back with Rathi Intimidator, but Shock Troops took it down on Pete's next turn. Unfazed, Terry played another Intimidator. Pete tried to get some damage through with a Zerapa Minotaur only to have it die to (you guessed it) a Sever Soul. From there, both players were just trying to win the damage race. Primeval Shambler showed up on Terry's side and Mogg Toady and Cinder Elemental on Pete's. With Terry at 14, Pete had enough lands in play to do 7 damage with Cinder Elemental. He plays Treetop Bracers on his Spore Frog in hopes that will get Terry low enough to "X" him out. Terry has the answer though: in response to Treetop Bracers, he played Steal Strength on the poor little Spore Frog. Suddenly Pete has to deal with the Primeval Shambler with turbo-swamps wanting to pump it up. Pete is forced to use the Cinder Elemental to kill the Shambler, leaving himself with nothing but a Mogg Toady. Terry polished Pete off soon after.