Round 5: Tony Tsai vs. Brian Kibler 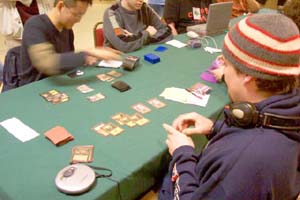 Ghost of Deadguy Tony "The Shark" Tsai and recent Good Man of the Week Brian Kibler will both be casting black and green spells today, but as they sat down to their feature match, Tsai was not confident. He is with The Rock, but Kibler's deck is a strange black-green Oath/Rock hybrid. Both know that Kibler has a huge advantage in this match.

The game started in Kibler's favor. He Duressed away Recurring Nightmare and cycled a Krosan Tusker while Tsai played three straight green sources and waited on his Yavimaya Elder to serve up the black. That let Kibler resolve Pernicious Deed.

Doesn't seem so bad, does it? Tsai sacrificed his Elder and Duressed Kibler, but what he saw changed the color of the game: Five lands. Kibler ripped a Dust Bowl off the top and started working over Tsai's Treetop Villages. Tsai refused to stop drawing land. He busted out Ravenous Baloth and Wall of Blossoms. Kibler was forced to Deed them away.

Then Tsai went for the deathblow: Buried Alive. He fetched out Genesis, Faceless Butcher and Birds of Paradise. Kibler's response of Haunting Echoes was devastating.

"You have Birds, a Treetop, and Living Wish to kill me with." - Brian Kibler 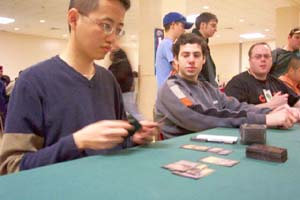 Kibler tried to keep Tsai under six mana with Dust Bowl, but Tsai just pulled up the land he needed to get Visara into play. Kibler had a second Oath. It turned up a Tusker, which was assassinated, and then Tsai hit for five. This time Kibler Oathed up his own Visara, and it went to the graveyard to the celebrations of Tsai. Kibler cut that short with Vampiric Tutor while still in his upkeep. Living Death demolished Tsai.

The game went on two more turns. Tsai held back on some troops, forcing Kibler to drop a Deed of his own to clear a path. On Tsai's next turn he said the following:

Unfortunately, there was no Oath in play. He was stopped after the first card, but since he'd already received a "Looking at Extra Cards" warning, it was upgraded to the loss of current game. Good thing he wasn't winning it anyway. 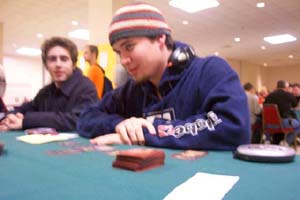 Kibler got things going quickly in the second game. Tsai started with Wall of Blossoms, to which Kibler responded with Vampiric Tutor for Oath. Tsai Duressed, catching Pernicious Deed and leaving Kibler with just a hand of land. Unfortunately, two of those were Dust Bowls, and Tsai was on three land, two of them non-basic. It didn't help that Kibler Oathed up Visara and then topdecked Scroll Rack. The road from there to defeat was short. Tsai Therapied away his Wall of Blossoms, only to Oath into another one. Visara came overtop for the kill.