Round 5: Too Many Togs

Player of the Year Gabriel Nassif faced off versus Itaru Ishida in the round five feature match area. Both players came in with a 3-1 record but this round would be a crucial one. Since winning Pro Tour-Atlanta with Nova, Gab hasn't made a peep on the Pro Tour scene. Itaru has finished in back-to-back 64th places (in Philadelphia and London), but as any gravy trainer will tell you it's the Top 8s that are the reason to compete. 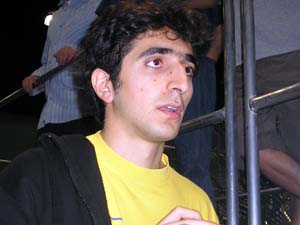 Nassif ramped up early in Game 1

Gab won the roll. His opening hand revealed that he was most likely playing Balancing Tings. The deck's goal was to set up an or Balancing Act followed by a beefy Terravore to quickly take down your opponent. A turn-one from Gab was a dead giveaway about what deck he chose to play this weekend. Itaru's Tog deck cycled a Lonely Sandbar and would try and gain control, using from the Loam to make sure that a quick Balancing Act or wouldn't leave his Tog deck devastated.
Gab tossed in a Terrarion and tried a Fire/Ice but Itaru denied him with a Force Spike. Gab did manage to resolve a Burning Wish on the following turn and grabbed an . With three Invasion sacrifice lands out (such as ), Gab was only a mana short of being able to cast the giant 8-mana spell.

Ishida continued to calmly place lands and reached the magical number for Gifts Ungiven, four. Itaru let a second Burning Wish resolve, and Gab grabbed a from the Loam with it, after much thought. Itaru did indeed have the Gifts that he represented with his four untapped mana and fetched from the Loam, mare , Putrefy and a Barren Moor. The Gifts let Itaru set up his engine nicely. Gab gave Itaru both the Putrefy and the Barren Moor.

Itaru brought back the from the Loam and then cast it to fetch a number of lands from his graveyard. Gab used an to tap down a Watery Grave before Itaru discarded Oxidize and Last Gasp.

Gab gave a small shrug and sacrificed all of his lands to . He knew he had no other choice. The game appeared to start over as both players slowly dropped out land after land. On the fourth turn, Itaru went back for from the Loam but Gab sacrificed an Archeological Dig to Condescend it.

Gab just played a land as Itaru once again attempted a from the Loam. This time he was successful bringing back a sacland and a couple of Cycling lands. Gab tried his own from the Loam but Itaru stopped it.

Now Itaru switched plans, bringing back a mare . Gab revealed Condescend and two Fire/Ice. Itaru chose the Condescend. Gab sacrificed an to tap Itaru out; Itaru used a Mana Leak to deny Gab a card from the . All Gab could do with his free turn, due to Itaru being tapped out, was bring back three lands. Then Itaru brought back three more lands, as he could always keep a full hand by tossing the cycling lands in for fresh spells.

Itaru slowly thinned his deck and built up his graveyard looking for a Psychatog. Once again Itaru played a mare this time taking Burning Wish. Itaru finally found a Psychatog. Gab went searching for a second . After cycling threw a few cantrips, he was left with all land in his hand and scooped to the lethal Tog.

Both players kept their opening hand for Game 2. It would be interesting to see how Gab planned on beating Tog. He must have known it would be present in the metagame. Was it just a choice of accepting a bad matchup or did he have a plan to execute? 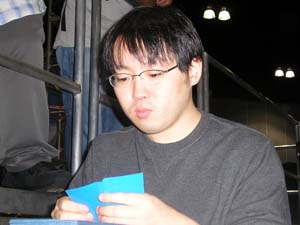 Itaru had the matchup in his favor.

Gab played out two Terrarions before Itaru tried a Cunning Wish. Gab used Condescend to stop the Wish and filter his draw steps slightly. Itaru had the turn-four Gifts Ungiven and Gab was out of permission. Itaru went for two cycling lands, a Polluted Delta, and the legendary bounce-itself land. Itaru already had the from the Loam in hand and brought back the lands that Gab decided not to give him from the Gifts along with a second Polluted Delta.

This game Itaru didn't wait nearly as long to play a Psychatog. The Psychatog forced Gab into action. End step he d a land leaving Itaru with only two mana. Even though Gab would have had better options with more time, he could only manage to because of the lethal Psychatog. Itaru didn't seem concerned. He went right back to three mana and played a new Psychatog.

Itaru d from the Loam and began to count to see if the Tog was lethal. After much deliberation, Itaru went for it pitching his whole hand and eating his graveyard. With two mana available, Gab had no answer and lost to a very angry Psychatog.